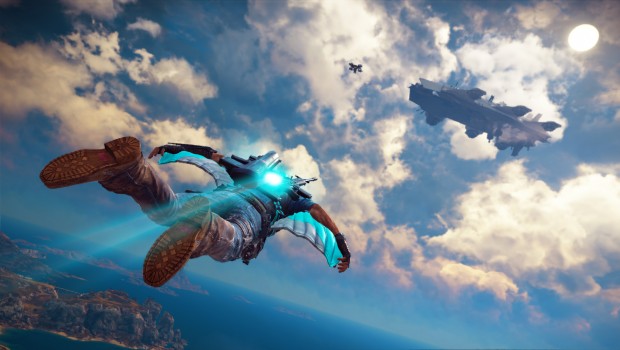 Summary: Just Cause 3: Sky Fortress is like an explosion: brief and kind of awesome. Not very substantial, but on the other hand: jetpacks.

In the Sky Fortress DLC—the first instalment in a three-part Air, Land, and Sea expansion—Rico Rodriguez gets a jetpack. His old wingsuit gets a few bavarium-powered additions—like boost thrusters, shoulder-mounted machine guns, and a missile launcher—which grant him further mastery over the forces of gravity and turns him into a pseudo-jetfighter. As if Rico wasn’t dangerous enough before, right?

This jetpack is the most significant addition in this DLC pack, but I can’t say that it is all improvement. Just Cause excels in two key areas: power and freedom. Theoretically, the jetpack should offer both of these in spades, with the new arsenal providing all the power one could need, while the thrusters overcome the only thing that the original wingsuit couldn’t tame—gravity. While the jetpack is undeniably cool, there are a number of drawbacks that undermine these two key points. The shoulder-mounted machine guns can only fire in a forward direction, which means Rico must be hurtling towards whatever he wants to mow down. When trying to engage in, say, an aerial dogfight as per one of the new jetpack-based challenges, this frequently resulted in mid-air collisions, crashing into towers because of poor approach angles, or simply missing the enemy altogether. The various functions of the jetpack—and all the buttons required to enact them—build and build until it becomes too complicated to manoeuvre with the grace and lethality expected of the unrelenting Rico Rodriguez.

Constantly adjusting pitch and yaw with the left stick, tempered by use of the thruster, all the while hitting square to shoot the machine guns (but not too much, in case they overheat) and R1 to use the missiles, and then the left stick and triangle when an enemy missile invariably targets you—and don’t even bother if two missiles get a lock, because you can only dodge one at a time. And trying to perform tight turns requires the use of the air-brake, which results in lost altitude, which then requires thrusting to regain while trying to adjust yaw and pitch and not overshoot the enemy while the camera laboriously adjusts to Rico’s new bearing… It’s difficult. And maybe I’m just bad, but even the half decent runs I’ve managed don’t feel satisfying—the very existence of the thruster removes the sense of mastery that came from chaining together grapples, wingsuit, and parachute to maintain an unbroken, fluid flight. The thrusters eliminate this, meaning that—so long as you don’t need to make any sharp turns—literal flight is a breeze.

The DLC includes a handful of extra missions and four new ‘settlements’ to clear, all of which can be knocked over in a short space of time. But two of the settlements comprise an airship, which is super cool and has a variety of new chaos objects to explode in slightly less obvious locations. It’s not a lot of content, but it tells a brief, self-contained and relatively interesting side narrative without any fat slowing down Rico’s acquisition of his new toys. The style of the new cutscenes is slightly incongruous with the presentation of the rest of the game, but they art is nice and nothing lingers past its welcome. I think my favourite part of the DLC is that Rico tries to berate the villain about her disregard for collateral damage. Rico has a wingsuit that shoots rockets and will invariably use them around innocents to blow stuff up in spectacular fashion. Pot meets kettle. The kicker? The villain had just finished explaining that her use of gratuitous force was in response to fear for her employees. Who’s the real villain now? Spoiler: there are no good guys in Just Cause 3—just jetpacks and cool explosions.