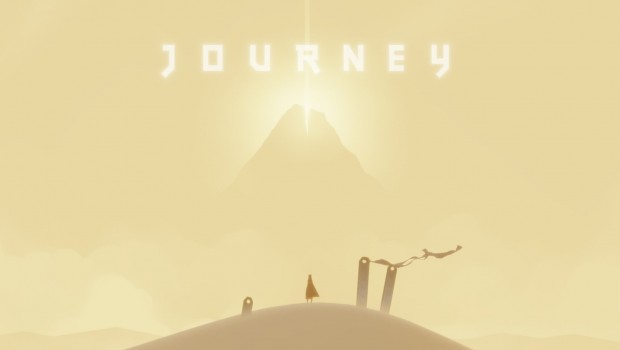 Finding the right words to describe Journey is incredibly difficult. Not because it is bland or because there is little to say—this is perhaps the most incorrect analysis one could make about the game—but because the experience is so human, so personal, that sharing is akin to tearing down protective walls and exposing my fragile, vulnerable emotions to strangers.

There is a point, a little over halfway in, where Journey introduces the first actively hostile element: strange floating dragon-like constructs that appear stone or metallic in origin. Their singular eye doubles as a search light; it is immediately clear that being spotted by these creatures would be ill-advised. So I avoid them, weaving away from the search lights as I slide down an enormous sand hill in a strange ruin. My companion races down the hill beside me; while this reminds me of our joyful sliding earlier, leaping over ledges and through stone gates, singing with glee, there is a clear, unspoken difference. This time, there is no joy, for we are in danger. And that becomes clear all too soon as my companion gently drifts into the white beam of light. It immediately turns red, the music takes a sharp turn, and the flying serpent coils and darts toward my defenceless friend: prey.

I have been in a handful of stressful, threatening situations before. The blood seems to warm and rise, I feel a heat in my neck and behind my ears, and my heart rate quickens. My usual mess of thoughts fade away and I am left with startling clarity. Being fairly rational, reasonable, under pressure is a trait that I am most grateful for. In that moment, I felt the same physical reaction. I calmly and deliberately slid through the search light, attempting to distract the creature. The two of us weaved back and forth, the spotlight supernaturally trained on my companion. Then another creature joined the hunt, focused on me. This world, which had been tranquil, was now actively trying to kill us.

A few tense moments later, we passed through a barrier and the enemies were halted. Relief washed over me. We were safe. For now. Journey is emotional and achieves this both deliberately and organically, which is unusual for videogames. Typically, deliberate attempts at eliciting emotion are signposted: the game wants you to feel sad, so it kills the dog. The game wants you to hate the villain, so it shows them kicking children in the face, and so on. The more obviously designed these situations are, the less powerful they tend to be. But Journey’s emotional journey, as it were, feels natural while clearly being a conscious element.

The latter sections are particularly powerful—especially if you are fortunate enough to play alongside a companion—and left me with a strange sense of peacefulness. I cannot explain exactly why these last stages are so effective for risk of spoiling what is an unforgettable, irreplaceable piece of art, but it is important to communicate how satisfyingly the ending is constructed. The experience is wonderfully cathartic but also instils a renewed sense of optimism and hope. It would be irresponsible of me to talk about Journey in any capacity without mentioning the music. But it would also be equally remiss to forget to praise the level design, the actual physicality of the space and the characters’ movement through it. Fortunately, these are intricately woven threads, as with all elements of Journey: when the sun is shining as I skid down a sand dune alongside my companion, as we chirp and sing and explore, climbing and jumping up the next dune, the music is hopeful, happy, rising and glowing and full of promise. Later, in the dark and cold, the air whistles and the colours darken; the atmosphere is heavy, we robed characters move slower, and there is an unrelenting sense of foreboding, pressing down on us, suffocating—even our voices are weak.

I wish I could say more. I wish I could find the right words to explain how the expertly crafted, minimalist narrative is perfectly fitted to fundamental narrative theory, and how this is mapped to the landscape. I wish I could talk to you for an hour about the menu, about the way the same screen changes dramatically before and after your first play. But some things are too hard to explain, and some things are better experienced first-hand: Journey is one such thing. There’s a moment, very early on, where my companion activates the end of the level before we have located all of the hidden cape upgrades. For the briefest moment, I consider turning away, abandoning them to rush off in search of my treasure. But I don’t—I sit within the glowing circle and we continue our journey together. We might not have the boost those upgrades would have afforded us, but it does not matter.

We have each other, and that is the most important thing.