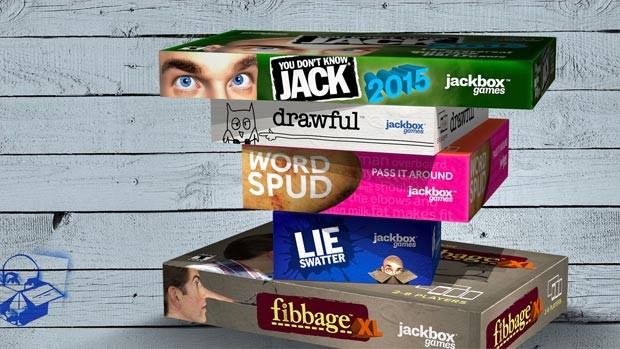 The Jackbox Party Pack is a digital exclusive release that contains 5 party games for players from 1 … to a whopping 100 as players engage in five whacky games that include You Don’t Know Jack, Fibbal XL, Drawful, Wordspud and Lie Swatter.

So with five competitive titles for the XBox One, the Jackbox Party Pack boasts everything you need for a great night in and although the graphics may not be the most impressive thing to grace this next-gen console, the gameplay is quite fun, especially when you start getting 3 to 4 players engaging in this craziness.

With that said, the number of players between titles varies and is broken down into the following; Another interesting element to the Jackbox Party Pack is that it allows people to use their smartphones to engage in this looniness that definitely increases the title beyond the classic Xbox One controller. This means that if you are limited to one or two controllers, smartphones can be used to increase the number of players by connecting to jackbox.tv and then entering your room code.

In terms of gameplay, a few of the titles are a little lacklustre but for the majority, most games are quite fun which does channel those quiz games quite well. I don’t think I’ve had this much since Buzz! on the PlayStation 3 which really mimicked that quiz game atmosphere and thankfully the Jackbox Party Pack does just that! So let’s talk about the games… You Don’t Know Jack is the 2015 instalment of this game and allows up to 4-players to engage in a variety of different trivia questions hosted by Cookie Masterson. This is probably the higlight of the game and really gives the players some interesting, fun and entertaining questions to answer that are based on real-world trivia, including pop culture questions.

Drawful supports 3 to 8 players that requires players to draw a certain thing in the game in a set amount of time. The first person to guess the drawing gets the points. So as you are given words or phrases, you desperately try to draw them before the time runs. Fibbage allows between 2 to 8 gamers which basically requires players to create their own answer to a question. So basically by bluffing (technically lying), you need to trick the other players in thinking that you have the “correct” answer. Fibbage is fun but best played in small doses. The last two games are a little light in terms of gameplay and fun which are Word Sput and Lie Swatter. In Word Spud, this title supports between 2 to 8 players and is a word based game that requires players to pick a word in order to create their own sentences or word associations. Unfortunately it does become quite repetitive and boring after awhile which reminds me a little of those Wii party games made by third-party developers.

Then you have Lie Swatter which supports anywhere between 1 to 100 players and requires players to guess either true or false. Like Word Spud, it definitely starts to lose its shine quite early on. With that said, these last two titles may be more suited to a family audience. Given the price and the fun of You Don’t Know Jack 2015, Fibbage XL and Drawful, the Jackbox Party Pack is definitely worth the admission price and I really loved the inclusion of using smartphones to play these games. It’s quite a clever premise and overall this game is perfect for a group of friends or family to have some truly hilarious fun.