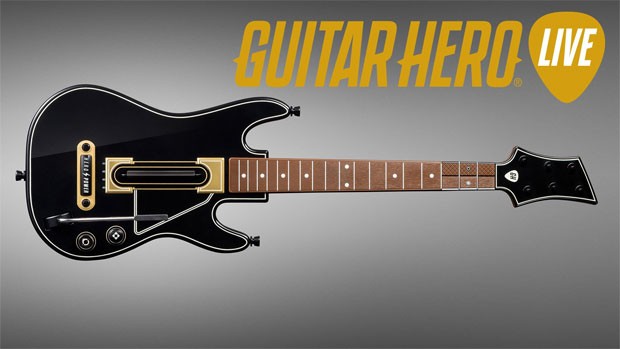 Summary: It's good to have this franchise back and Guitar Hero Live successfully tweaks the gameplay by giving gamers a more fulfilling experience

After several years in the gaming wilderness, the franchise that turned humble mortals like you and I into true rock gods has finally returned and is available on all next-gen consoles that include the PS4 (reviewed), XBox One and the Wii U. There’s even a tablet version!

So for those who have played the previous Guitar Hero games before, the first thing that you will probably notice about Live is the updated interface and tweaked gameplay mechanics plus it tries to turn you into the star with footage of actual crowds and band members. It’s like a first person perspective from a guitarist. Sure, this seems a little cheesy at first but hey, this game is all about illusion and developers Freestyle Games definitely succeed in not only making you play this controller like a “real” guitar but the audience and band is quite interactive. So when you play like a rock god, the crowd will go ballistic but play poorly and you’ll soon find yourself wanting to leave the stage unless you can pull out a miracle riff or two! The full motion video used to portray the crowd is quite cleverly done as it’s not just static but moves around to your fans who also get aggressive if you play bad, they will start to boo you off stage. Even your band will get annoyed if you start to mess up those notes and seeing them explode is amusing. It’s quite a clever piece of smoke and mirrors and really helps get you immersed in the world of music and playing as a world-class guitarist. Then you have the guitar itself that feels like a traditional Guitar Hero controller but its received a much needed overhaul to make the game more challenging by including a tier system of frets which definitely makes it feel more like a real guitar because of how you position your fingers. Basically the buttons are positioned into two rows of three and as a result, you need to relearn the game but all the video game clichés are still included in the game to help boost your score and use that whammy like a pro. For newcomers, you can just use the bottom frets only and as you progress, you can raise the difficulty. In terms of gameplay, Guitar Hero Live boasts two main modes that includes Live (obviously) and TV which is dubbed as the “World’s first playable music video network”. The Live mode is basically a campaign mode which requires you transform into a guitarist as you play through a variety of tracks in order to become the best band in the world. This mode has a set track list (42) and is similar to the previous games which is quite enjoyable and is great to learn the ins and outs of the title. I enjoyed it but its replay value if a little limited.

Then you have the TV mode which basically gives the gamer a plethora of online channels which basically allows you to play along with a variety of different songs from all sorts of genres, eras and timing. As you succeed, you are awarded additional bonuses to help with your playing and given the amount of content available, it’s quite a daunting yet an enjoyable gaming mode. “Hero” power is also available and my moving the guitar up, it starts the bonuses! Lastly the title does feature local multiplayer that boasts two guitars and a microphone. Vocals are similar to past games and unfortunately don’t come close to Sony’s excellent Singstar series. However the online multiplayer for the “TV” mode is a great way to challenge other folks from around the world in order to get those high scores. This even keeps your ranking which is fun when you challenge other gamers. You can also purchase additional songs for this streaming mode via the party pass but if you put in the hard yards, you can just play what’s available for now and there’s plenty of free tracks. For the campaign mode and like previous Guitar Hero games, Live features a stellar tracklist that includes artists from all eras such as Queen (We are the Champions), Rage Against the Machine (Bulls on Parade) to Angus & Julia Stone (A Heartbreak). The great thing about the tracks included in both the campaign and “stream” version is the diversity as the music really gives the player some wicked choices and more importantly, some awesome bands and singers to jam with.

It’s good to have this franchise back and Guitar Hero Live successfully tweaks the gameplay by giving gamers a more fulfilling experience that is closer to playing a real guitar then the previous last-gen console versions. More importantly, the guitar works well and if you’re familiar with the previous game, you will need to re-learn the mechanics again but once you put the time and effort into this, you’ll soon become a rock god. The only slight gripe I have with this release is the campaign mode is a little cheesy but thankfully the streaming “TV” mode which boasts some awesome music plus video clips really puts some unpredictability into the game and more than makes up for this clichéd oversight. GH LIVE – YOU are the rock star
Playing music in front of a real crowd is like no other experience. With the new GH Live first-person view, YOU’LL take center stage like never before.

GHTV – All playable, all the time
GHTV is a continuous broadcast of music videos where you and your guitar controller are the star. Hundreds of videos will be available at launch spanning all different genres of music, with new videos continually added to the line-up. You’ll be able to discover and play new songs all the time.

THE GUITAR CONTROLLER – Easier to play, harder to master
The guitar controller was redesigned for the best gameplay across all skill levels. The new 2×3 button layout makes it easier to play with only three buttons, or, on veteran, it mirrors what it’s like to play chord shapes with all six buttons, making the game easier for beginners and harder for experts.