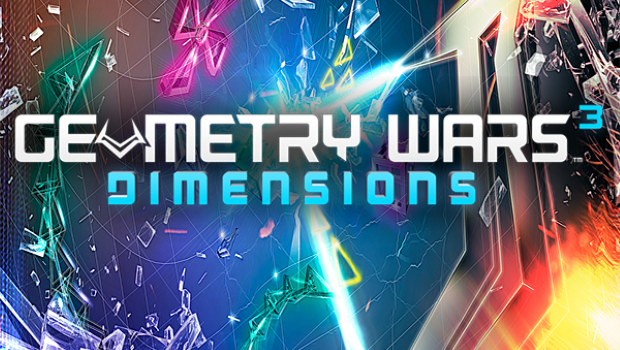 Summary: Shaking up the formula somewhat whilst still ensuring that longtime fans and purists are catered for, Lucid Games have done the unfathomable and created a game that betters the already stellar efforts of Bizarre Creations.

Hello Geometry Wars, my old nemesis… We meet again. When I first purchased my Xbox 360 way, way back in 2008 I came across a simple little twin stick shooter that, despite a relatively steep learning curve, enthralled me to the point where I would eschew big triple A titles like Gears of War in order to spend time trying to master the Robotron: 2084 inspired gameplay, frantically diving back into the fray time and time again in an effort to top my previous score and gain one of the coveted top spots on the global leaderboard. Soon after, Geometry Wars: Retro Evolved 2 hit and boy, did it make an even bigger splash than its universally adored predecessor. By adding inventive new gameplay modes, a frustrating yet addictive co-pilot mode and glowing green geoms that dramatically upped your multiplayer score, Retro Evolved 2 built upon the simple foundations of the first game without diluting the core experience.

Now, six years later, here we are with the latest iteration in the franchise, the aptly named Geometry Wars 3: Dimensions. In the interim between the main titles there have been a few changes, most prominent of which is the absence of original developers Bizarre Creations, who were dissolved in 2011 by parent company Activision. New developers Lucid Games then stepped up to the plate with the gumption to tackle this beloved franchise and to also leave their own distinctive mark upon the legacy of the series, a feat that could very well appear insurmountable to most… After all, Bizarre Creations had refined the gameplay to the point where anything extra added could very well be superfluous at best and damage the simplistic charm of the game at the very worst.

So, did they manage to pull it off? The answer? A resounding yes. Coming from a huge fan of both of the previous main titles (I never played any of the spin-offs like the DS exclusive Geometry Wars Galaxies), Geometry Wars 3: Dimensions more than lives up to the lofty expectations of fans. Despite major additions such as the changes to the playing field and the new adventure mode, the core essence of the game remains and is as challenging and obsession building as ever.

The core mechanics of the game remain relatively unchanged: You pilot a claw shaped ship using the right stick and shoot the oncoming deluge of spawning geometric shapes with the left, adjusting your playing style in accordance with the designs of the shapes, for instance, adding a little wiggle in your firing trajectory in order to land a hit on those annoying green squares. With a smart bomb or two in your possession for when the waves of enemies become too much and the assistance of a selection of drones, each with their own special abilities (First introduced in the aforementioned Galaxies), your main objective is to stay alive by any means necessary, which usually means weaving in and out of minute gaps in the onslaught whilst firing wildly. The drones help immensely in turning the tide in your favour, particularly once you’ve unlocked a few upgrades – One may fire alongside you whilst another has a magnetic field that gathers Geoms for you, allowing you to focus on thinning out the herd.

The Geometry Wars series favour twitch reflexes over everything else and soon you’ll find yourself mentally switching off and entering “The Zone” where you basically rely upon instinct and nothing more. No other game has entranced me in such a way as Geometry Wars manages to do, with the one dimensional gameplay harking back to a more innocent time in gaming where your main objective was to achieve a massive score. The biggest change is in the design of the playing fields; no longer restricted to a mere rectangular battleground, the environment will now take on three dimensional shapes like a sphere or a cylindrical sausage shape, similar to the planetoids in Super Mario Galaxy. Retaining the 2D game mechanics and introducing them to the third dimension was a particularly bold step for Lucid Games to take but, thankfully, the gamble has paid off in dividends – The first time you pilot your ship around a globe as your enemies come from every direction is a thrilling, almost giddily so, experience.

The game offers up a variety of modes, with Retro Evolved included for the purists and all but one of the game modes from Geometry Wars 2 present and accounted for, from the fan favourite Pacifism, where you must go through gates to vanquish your enemies in lieu of having any firepower to King, where you must dart from safe zone to safe zone in order to fire, but it’s Adventure Mode that’ll take up most of your time, at least at first. Set across a sequence of 50 stages, Adventure Mode offers up unique challenges that manage to make each stage feel fresh even when you’re basically doing essentially the same thing, be it obtaining a certain score within a time limit, tackling colossal shapes that incrementally release smaller versions of themselves when killed to tackling a gargantuan boss. Yes, Geometry Wars 3: Dimensions actually features boss battles! Rather than merely hammering these beasts into submission, players will have to watch their movements and ascertain exactly how to break through their defences; it’s a nice piece of contextual problem-solving that encourages changing tactics and are a welcome addition, at least where this reviewer is concerned.

To progress through the stages the player must obtain a certain amount of stars, which also serve to afford the opportunity to purchase upgrades for your drones. This design choice is reminiscent of that used by many mobile games and, to be honest, can sometimes be as annoying to achieve; the difficulty spikes are frustrating and some of the objectives seem nigh impossible to complete to the degree where you obtain three stars. Another issue with this system is that progression is locked at certain points until you acquire a prerequisite amount, forcing you to go back and replay the previous stages, something that can soon become frustrating. The simplistic graphics are as vivid and garish as in the game’s predecessor and still make for an amazing neon soaked lightshow that, aesthetically, is unrivalled. The new 3D playing fields look stunning and the frame rate runs at a steady clip; overall, if you’re familiar with the unique visual direction of the series, you won’t be disappointed.

Audio wise the thumping club tracks are back, albeit this time composed by a different party. The tunes are distinctive and memorable and, although sometimes repetitive, never annoyingly so. They lend to the aesthetic of the game as a whole – When you’re scooting along a giant sphere, blasting enemies as a pulsating track pounds away in the background, it almost feels like you’re waging war on a giant disco ball in a psychedelic interstellar rave. Shaking up the formula somewhat whilst still ensuring that longtime fans and purists are catered for, Lucid Games have done the unfathomable and created a game that betters the already stellar efforts of Bizarre Creations. The gameplay additions work tremendously well and also serve to keep players on their toes by demanding that they change their tactics in accordance with the context of a particular stage.

Simple things like forcing the player to chase down Geoms to jack up their multiplayer rather than circling the perimeter still work effectively and the addition of the drones helps make previously impossible challenges a breeze to walk through once the required upgrades are purchased. I could have personally done without the star progression system and the unrelentingly brutal difficulty spikes that will frustrate even hardened Geometry Wars veterans, but overall this is a worthy addition to the franchise that does justice to what came before and the simple pleasure of battling it out for supremacy on the global leaderboards is just as addictive now as when I first experienced Retro Evolved.

Whether you’re looking for a quick fifteen minute blast or are settling in for a night of action, Geometry Wars 3: Dimensions, with its precise gameplay and myriad of gameply modes, is that rare beast – A simplistic dual stick shooter that rivals the big blockbuster titles in terms of sheer enjoyment.