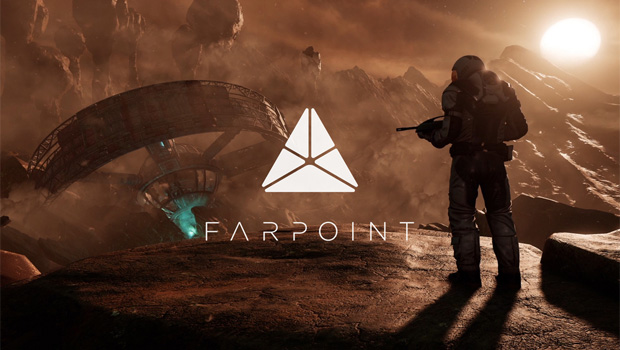 Summary: Farpoint successfully takes the PSVR to the next level with the Aim Controller!

Farpoint is the latest PSVR game for this system that was developed by Impulse Gear and takes players on a sci-fi adventure to another world. In terms of gaming, Farpoint is a minimalist shooter and although it blurs the boundaries between FPS and VR, it does simplify the gameplay to make it more accessible on the PSVR. Given that, it really captures the wonder of an alien world and when matched with aliens plus weapons, the VR platform works quite well with the overall premise. It also has this fun, yet cliched sci-fi story behind the gameplay that has a team of scientists exploring an irregularity in space which holds vast energy and like most stories, things go wrong and you end up on the other side of the universe on a strange planet as you attempt to collect the clues and find a way back home. As you search for the scientists, you will find holologs that tell their story in parallel to yours which is quite interesting. Without soiling the premise behind Farpoint, it makes for some interesting storytelling, especially in the world of VR. However as VR is still in its infancy, there are some limitations with Farpoint and although it’s well presented on the PlayStation 4, the gameplay is limited in what it allows the player to do. At times, Farpoint feels like its on rails with its linear path progression as you use your gun to basically shoot things. Navigating a virtual world is a tricky aspect and although the gameplay and choices given to you are in a neat little box, the wonder of VR thankfully helps immerse you into the gaming world and the characters. Furthermore, the campaign mode of Farpoint is a little on the short side with most gamers being able to complete the title in around 5 to 7 hours. So although the game throws in you the deep end of this VR experience, the game does a good job at teaching you the mechanics behind Farpoint in terms of movement, taking cover, using your different weapons and combat. You also need to acquaint yourself with the Aim Controller such as using the button to reload because when the enemies come thick and fast, things really become quite hectic in Farpoint and needless to say, people watching you play will be quite amused as you start to carry on like Hudson from Aliens. The tracking of the PSVR also does a decent job which really helps trick your brain as to what is happening in this virtual world.

The combat in the game is fun, albeit a little repetitive and Farpoint does throw some interesting battles at the player to help spice things up. Some of the larger spider-like aliens can be quite tough and these boss battles did give a challenge to me at times. However what makes Farpoint such an interesting VR game is the inclusion of the Aim Controller and although it looks like a child’s toy in the real-world, in the game it looks like a mean weapon that helps with the overall illusion. At times, I felt like I was Starship Troopers as both my hands gripped the virtual gun as I valiantly took on the enemy and screamed ‘Come and get some!’. So even though the enemies in the game were a little hohum, the inclusion of the Aim Controller plus VR did make the experience considerably more enjoyable and dare I say… realistic, especially with the rumble within the controller. It should be noted that the PlayStation VR Aim Controller has most of the buttons from the DualShock controller such as the shoulder buttons, thumbpad, face buttons, left stick and even the share button. Although some might think that the amount of weapons are limited in Farpoint, you are on another world with scarce supplies so it does make sense. I really enjoyed using the assault rifle which once again channeled my inner-Aliens film fantasy and the shotgun was another enjoyable weapon to use as I blasted these alien creatures away. The game also offers a two-player online co-op which does stretch out the longevity of the title, however for me, it’s a game that is thoroughly enjoyed in solo. Graphically, Farpoint is one of the better looking titles on the PSVR which successfully captures this alien world with all its creatures and oddities. However like other VR titles, the graphics have been simplified to suit the specifications of the PlayStation 4. If you do have a PlayStation 4 Pro, there is a noticeable difference with the graphics as the resolution is higher and more importantly clearer. The audio of Farpoint is brilliant and it’s one game that must be played with the headphones which makes the experience even more realistic. In the end, Farpoint is an engaging game that although doesn’t push the boundaries of what VR is capable of, it still delivers a fun yet ultimately short VR experience on the PlayStation 4. Overall, it’s a fun premise with some really intense battles as you use the Aim Controller to take on an almost never ending hoard of aliens with an interesting yet cliched story as its backdrop.

Come on get some!