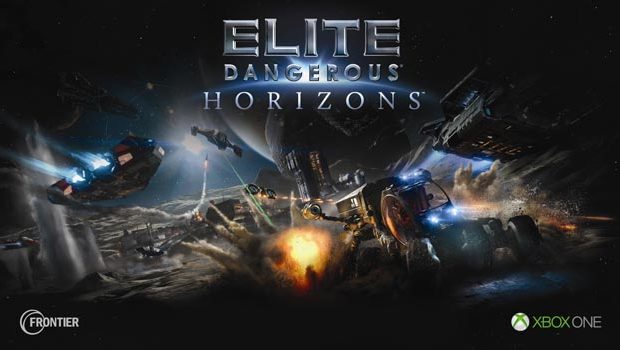 Summary: Elite Dangerous Horizons is a beautiful and immersing game on the XBox One, however is lacking a direction or story

Elite Dangerous: Horizons the first expansion of a crowdfunded sequel to the 1984 classic Elite. It is an ultra realistic space exploration sim where you are the commander of a ship making your way around the galaxy. It includes a variety of different career paths to follow, political relations to navigate, places to explore things to mine and ships to collect, equip and upgrade. Much like the original the goal is to attain the highest rank and rating in your chosen skills, reputations and relationships. It can be played in solo or online multiplayer. I have a complicated relationship with this game, I love some things that Frontier Developments have created in this game. However on the flip side some things just left me feeling there should have been more to it. I think a certain type of person is going to love this game entirely but that will not be the majority. E.D: Horizons is very hard and has a steep learning curve, while this might put some people off I found it really fun. Just trying to land your ship on the designated bay inside a space station can be an intense moment in a game when you are a newbie, so when you master actual REALLY difficult tasks you get a pretty large dose of achievement fulfilment.

The world is VAST with some 400 billion systems, planets, moons and asteroid fields and as a new Commander of a new Sidewinder you are now free to go out into the galaxy and do whatever you feel like doing. You now can choose what kind of missions you do, what kind of equipment you want, which factions you support, if you will act illegally or within the law and what type of career you might want to specialise in. The choices range from assassination and piracy to the more law abiding realms of trading, mining, exploration and sanctioned bounty hunting. You can accept missions that you are not equipped to complete and they also have a time limit so you need to carefully what a mission requires; if you can deal with any resistance you might encounter, where it is located and if you have a clear flight route there. Originally designed for PC and being a realistic space sim there are obviously a large number of different systems to control and menus to navigate, both in flight and while docked. I found the translation to an xboxone controller a bit confusing at first due to single buttons having a myriad of different functions, however the set up is quite intuitive and I got used to it after a while. If you still don’t like it you can change your button bindings in the menu. Flying and fighting is very realistic yet fun and far better on the xboxone as joysticks make controlling the ship much easier. There are a lot of things to keep in mind while fighting and you have a limited view from your cockpit. This can be difficult but again, mastering the art of the space dogfight is super fulfilling.

The graphics in this game are amazing, even just travelling from place to place the views are amazing and I would definitely love to play this game with some good VR equipment. The ships, space stations and outposts all have great design occupying the sweet spot between looking cool and looking functional. Inside the cabin of your ship and the accompanying panels and menus all look very sleek and appropriately sci-fi while still remaining reasonably easy to navigate and easy to interpret. Weapons look great when they fire and accruing damage from being fired upon looks organic and realistic. All the stars, planets, moons, asteroid fields are completely mesmerizing and if that isn’t good enough, with the update of Horizons we can now go down onto a large number of planets and enjoy such attention to detail with access to the entire surface of the planet. Even with the super high quality and density of graphics happening on screen I only have a few instances of skipped frames and this mainly around entering and leaving Frame Shift Drive (their equivalent of ‘warp’) where there is a massive amount of varying effects happening at once. The sound design on this game is stunning and in a genre that often lacks in this department it’s an achievement. From voices over the radio to failing to avoid an interdiction the sound was completely engaging. E.D: Horizons manages to compromise between the hushed hum of a spaceship and the immense music that seems to get composed when humans contemplate the majesty of the universe. The sound effects of entering and leaving Frame Shift Drive, firing weapons and even deploying and retracting equipment are realistic but still interesting with just enough pew pew to be fun but not so much that is sounds silly. The size of the world in E.D: Horizons is actually astronomical and that vastness of space is what makes this game great but at the same time is its disadvantage. It’s incredible to travel around this massive unexplored unknown but at the same time once you have gotten a good grasp of the controls, have all the ships you need and attained a rank where money and reputation are easy to acquire the desire to go out into the unknown is very little as there is not that much to actually do there now. It is true that Horizons gives us the new option of being able to leave your ship and explore the planet surface in your SRV (Surface Recon Vehicle). Which will add more hours to your experience as can mine or explore but even if your find settlements or outposts you are still restricted to your SRV and in the end the things you can do on a planet is quite limited. It would be great to be able to get out and explore a bit or even build your own outpost on a planet. The skilful combination of breathtaking graphics with hopeful yet haunting music including hypnotic background space sounds makes Elite Dangerous: Horizons epically immersive. You can stare at the star speckles views from your cockpit for hours and hours. The down side is that you will eventually just be doing that because there is no compelling story to motivate you onward or clear objectives that you feel an urge to complete. It’s disappointing that a game that has so many positive aspects falls down in gameplay, however if you are the kind of person that likes to tick all the boxes and collect all the rings you might enjoy this past the point I could not. So for now I will look forward to the next expansion.