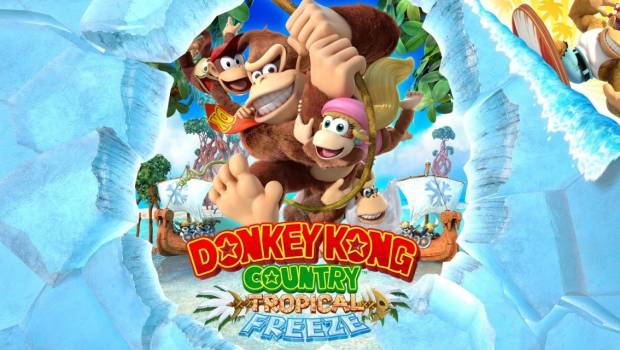 Summary: Not much has been added to the Nintendo Switch rerelease of Donkey Kong Country: Tropical Freeze, but it still deserves a place in your Switch library If you’re unfamiliar with Donkey Kong Country: Tropical Freeze, you can check out our 2014 review here. In fact, you could replace every mention of the Wii-U in that review with ‘the Nintendo Switch’ and it would still be almost completely applicable to this rerelease, with one minor caveat. As mentioned in the introductory paragraph above, the only difference between the Wii-U version and the Switch version of Donkey Kong Country: Tropical Freeze is the inclusion of a new ‘easy mode’ available from the get-go. Selecting this new mode will replace Donkey Kong with Funky Kong as the main character. Funky Kong is able to double-jump, glide, roll and swim infinitely, plus the ability to land on spiked surfaces that would normally cause damage. As you can imagine, the option to play as Funky Kong dramatically reduces the game’s difficulty, however it’s a welcome addition that deserves some praise. Despite it’s colourful, playful aesthetic, Donkey Kong Country: Tropical Freeze can be brutally difficult in the later stages of the game. The addition of Funky Kong now opens up the game to players that may get frustrated by the challenge. Unfortunately, this easy mode must be selected at the start of the game and cannot be toggled off, so if you didn’t select it at the start and are struggling on a particular level later on, you can’t simply breeze through it with Funky Kong. There are a few Switch-specific facets of Donkey Kong Country: Tropical Freeze that are worth mentioning. The first is fairly obvious, but the game’s multiplayer functionality is fantastic on the Switch. One player controls either Donkey or Funky Kong depending on the selected game mode, while the other controls Diddy, Dixie or Cranky Kong. Both players then share the screen to play through the campaign levels. It’s incredibly easy to set up, there are a variety of control schemes available and the Switch’s gorgeous screen makes playing co-op on-the-go an enjoyable option. Another important detail is the game’s relatively miniscule 6.6GB install size, which makes it a decent candidate for a digital purchase as it won’t take up too much of the Switch’s built-in memory. Also worth mentioning is the bizarre implementation of HD-rumble when playing with the Joy-Cons. Every time a character jumps, crashes or rolls into something, there’s an oddly forceful (and surprisingly loud) vibration triggered within the Joy-Cons. You’ll hardly notice it when playing on a crowded bus or in front of the TV, but if you’re the type of person (like me) that enjoys playing the Switch in bed, your partner may not appreciate it. At the time of writing there’s no option to disable or diminish the rumble feature, so it’s just something to keep in mind. Putting aside opinions on Nintendo’s insistence to rerelease Wii-U games for the Switch, Donkey Kong Country: Tropical Freeze remains one of Nintendo’s best modern platformers, and the Switch version is objectively better than the Wii-U version, even if that is simply due to the inclusion of Funky Kong’s easy mode. The game still looks great, sounds brilliant and plays fantastically. If you missed it the first time around on the Wii-U, you’re in for a treat. If you’re a Switch owner that enjoyed Tropical Freeze on the Wii-U, I’d say it’s worth replaying as the portable nature of the Switch lends itself well to the collect-athon platforming gameplay.