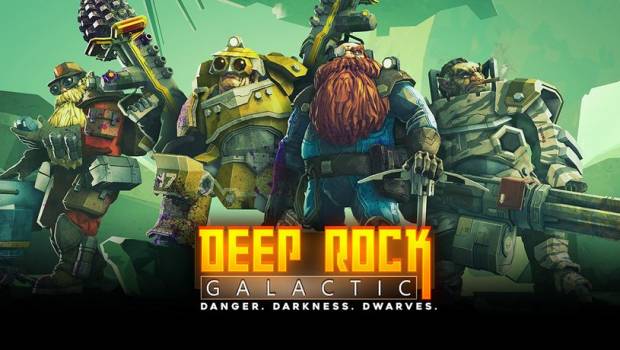 Deep Rock Galactic is a four-player cooperative shooter which puts gamers in the role of crazy space dwarves who work for an intergalactic mining company, however these miners are no ordinary miners. They are actually far from it and while they are exploring these deep extraterrestrial tunnels on alien worlds, they encounter all sorts of challenges.

There’s also four different classes available to choose with each character having their own pros and cons that must be used in collaboration with the other characters that adds this interesting team-based puzzle dynamics. These classes include Driller, Engineer, Scout and Gunner. The Driller has the ability to drill through rocks and is equipped with a flamethrower.

Next up is the Engineer who not only has access to a powerful shotgun but can lay sentries to slow down enemies. The Scout is the nimblest of the lot who can reach places others can’t and has access to a grappling hook, has much needed flares to light up the area plus sawed-off shotgun. Finally we have the Gunner who is the tank of the party and boasts a gatling gun plus ziplines to help move players from point A to B.

Adding to the challenge are the destructible environments which adds to the gameplay and is also quite enjoyable as you reshape the world around you to ensure your victory. Speaking of environments, these are procedurally generated caves which means that each time you explore a cave, it’s ALWAYS a new experience.

As mentioned, each of the glasses are quite different and supporting them in their journey are their weapons. This includes powerful weapons like flamethrowers and gatling guns plus grenades that help enemies go BOOM. However where this game shines is through its non-weapons such as portable platform launchers or ziplines to help you reach your intended areas. These give Deep Rock Galactic a clever twist that makes this title more than just a first person shooter.

So as you’re working as a team, trying to collect your resources, the only way you can succeed is by supporting your friends because that’s the only way, especially when the enemies start coming in droves. Sure, the gunner class can help keep them off your heels as the aliens attack but you also need to ensure that your team mates are protected as well, particularly if they are trying to create platforms or drilling into rock. This is what makes Deep Rock Galactic such a treat to play.

Graphically, the title almost has this cartoon like-atmosphere to it that suits the premise well. It’s quite well presented on the Xbox One with some decent level design and interesting character creations that go hand-in-hand with the overall gameplay. Add in a dynamic lighting system which makes exploring these underworld caverns a realistic experience and Deep Rock Galactic is a visually striking game. Audio is equally as good as is the professional and sometimes amusing voiceovers which really adds to the overall atmosphere, including the music and ambient sound effects.

If you’re looking for a fun and different multiplayer experience on your Xbox console, check out Deep Rock Galactic that successfully incorporates team puzzle mechanics as you attempt to bring back the bling and more importantly… survive, this first person shooter!