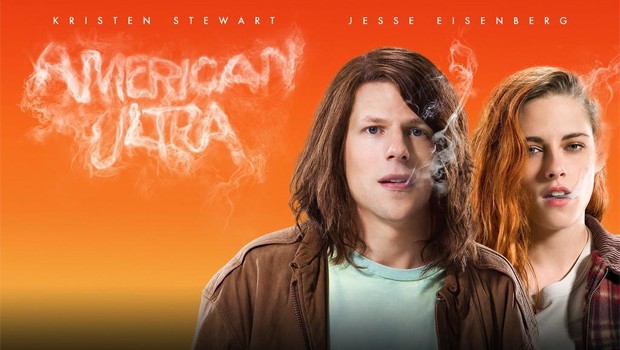 Summary: “American Ultra” is an ambitious, uneven and underwhelming film that is so forgettable it’s likely to go up in a cloud of pot smoke.

“American Ultra” is a film with a good premise and it could have been a sleeper hit. Instead, it’s just a rambling snoozer. This dramedy and stoner-action flick is a bit too ambitious for its own good. Some unbelievable parts in the plot and a schizophrenic tone let down the whole show and stop it from realising its full potential. The film is directed by Nima Nourizadeh (“Project X”) and was written by Max Landis (“Chronicle”). It stars former “Adventureland” co-stars, Jesse Eisenberg and Kristen Stewart. The former plays Mike Howell, an anxious and uptight pothead who works at a convenience store not unlike the one seen in “Clerks”. He is pretty useless when it comes to life skills- he’s working for minimum wage, he can’t cook without threatening to burn the house down and he has a panic attack on the way to the airport before a Hawaiian vacation. But unbeknownst to him, Mike is also a highly trained, CIA sleeper agent. Kirsten Stewart on the other hand plays Phoebe Larson, a bail bondsman and Mike’s girlfriend and enabler. The pair share a decent amount of chemistry and spark even though the script is lacking. The film follows the pair as the day deteriorates into a series of murders, fights and bloody violent attacks (the CIA want Mike to be killed so they send psychotic thugs to do the job).

The film isn’t sure if it wants to be a silly or cartoonish stoner comedy like “Clerks” or a serious full-blown action film like the “Bourne Identity”. In reality, it doesn’t succeed at being either as “American Ultra” is full of lots of black comedy and brutal violence but there isn’t enough left to engage the viewer and save it from being a repetitive and plodding mess. It’s also a wasted opportunity at times. The special features are also disappointing and only include a few short featurettes and interviews with the cast and crew, which aren’t particularly enlightening. “American Ultra” is an underwhelming film about a stoner screw up and double agent. It’s something that is a bit too slow and silly for its own good. It’s also not helped by the fact that the individuals overseeing the production were happy for it to be a few different films at once but this just means it doesn’t really succeed at being much of anything. In short, this is a film that is so forgettable it’s likely to go up in a cloud of pot smoke.