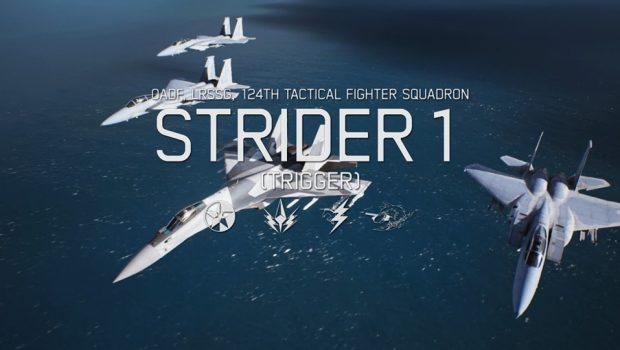 Ace Combat 7 released its first major story DLC a few weeks ago and I finally strapped back into the cockpit to sortie once more. Beware, spoilers ahead.

Operation Sighthound, was the Osean Navy’s attempt to capture an advanced nuclear powered submarine, the Alicorn. To do this, they sent LRSSG Strider Squadron, together with several landing aircraft and ESM (Electronic Support) planes for a land takeover and air superiority mission. The mission itself, began horribly, with Brigadier General Clemens having privately changed the time of operation commencement. With friendly ESM aircraft arriving several minutes behind initial schedule. Trigger and the rest of Strider squadron were forced to engage without initial support, to defend the landing crafts. About a third of the way into the battle, friendly aircraft finally arrive and the Eruseans began launching anti-ship aircraft. Trigger, with the help of friendly aircraft and ESM, successfully defend the initial attempts to sink the fleet.

It was after this time, two unknown Su-47 Berkuts sporting Osean emblems, entered the airspace. Downing a Erusean fighter and subsequently engaging Trigger in sole combat. After some furious dogfighting, with some radar jamming from the pair and notable canopies painted on the underside of their planes, perhaps to confuse their targets. Were eventually forced to egress out of the battlefield due to damages sustained by Trigger. The pair, callsigns, Scream and Rage, retreated from the airspace but promising to kill “Three Strikes” the next time they met.

This is what Ace Combat fans live for!

As the fleet finally approached the Alicorn, the ship subsequently launched and fired upon the Osean landing craft. Destroying them entirely. The ship then launched four Rafale M fighters, one loaded with a WMD Cruise Missile, before submerging to escape the area. Deciding the WMD loaded fighters were of more immediate threat, Strider squadron pursued the SACs squadron and shot them down. The lead aircfraft exploding fiercely as the cruise missile detonated. The Alicorn’s captain, Matias Torres angrily hinting at further plans as the sub fled the area. The mission is great, some grand opening cinematics, more fictional technology, a side story filled with secrets and drama. This is what Ace Combat fans live for! Gameplay is much the same, this mission starts off as your generic defend the target so it can do it’s thing and then progresses into chase down these targets to claim air superiority. The standard arcadey theme Ace Combat has perfected over the years and that returning fans will always love.

What’s more is that up to this DLC mission, we’ve had three aircraft added into the roster, if you have the season pass, you’ll get them all and access to this mission. These three fictional aircraft; ADF-11 Raven (Ace Combat 7), ADF-01 Falken (Ace Combat 5) and the ADFX-01 Morgan (Ace Combat Zero:Belkan War), make nice additions to the already vast roster. These aircraft make short work of the DLC mission right up to Hard mode, it’s only in Ace mode, I had any difficulty in completing the mission. For this review purpose, I completed the mission on Normal in one of the regular planes, an Su-35S Flanker-E variant, which in hindsight could’ve easily taken on Hard mode also.

Video and audio are as great as ever, I did notice some limitations in frame rates at times, but that’s simply due to there being so much going on in each section of the battlefield as opposed to being a little more spread out evenly, like some other missions. And while I can’t say that I liked the new BGM for this mission, it was definitely on point. I really like the additions of the in game intro, showing the sub up close, then showing your squadron and supporting fleet, it has been done before in the base game, but it’s always good to get some real up close shots of what’s about to go down. In summary, great DLC, can’t wait for more! Oh and if you haven’t already? Go get the season pass already! It’s pretty cheap and if you’re a true fan, you’ll love the simplicity of what it adds.

**All footage displayed is my own**