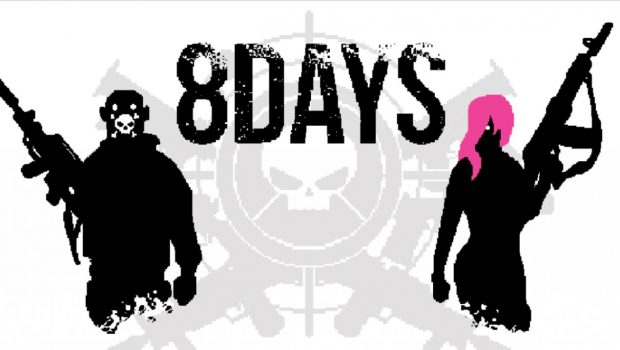 Summary: This Is Not the Retro Shooter You’re Looking For.

When a budget game claims to be ‘inspired’ by other surprisingly successful, side-scroller retro style indy titles…that’s a very bold declaration. Inspirations by design, should be better than their predecessors. 8Days is most certainly not on par with Retro City Rampage or Hotline Miami, high hurdles to clear.

On the PS4 (noting there’s a STEAM version as well), core gameplay is executed by using both analog sticks. The left one moves our mercenaries just fine. The right one, however, is a train wreck. It never quite lines up, is more guide than actual aiming mechanism, and fired projectiles/bullets are stuck on rails. With this being said, I’ve got a strong suspicion this limited to the PS4 version, as a mouse offers true 360 degree movement. Unfortunately, I’m stuck with the PS4 copy…and the review continues. Our aforementioned mercenaries – an Australian dude and a Mexican lady – are Gold, Oil and Diamonds (G.O.D.) expendables on missions to kick butt and take names. 8Days exists in an awkward dichotomy between often gory and ultra-realistic presentation…and comical justifications for missions. One on hand, you’re tasked to stop a sushi rice shortage. These same levels, however, feature skinning things alive, gory deaths, and very realistic accidental kills.

To explain and for me, 8Days’ 8 bit graphics – in their simplicity – add to the hyper realism factor. Seeing deliberately large amounts of violence in pixelated but realistic fashion…and devoid of humor buff…can be shocking at times. Mowing down seemingly slave rice patty laborers in blood pools makes me a bit uncomfortable. Don’t get me wrong: I’m not a violence critic in gaming, and have no issues with realistic FPS. 8Days, however, seems to go a bit over the top in presenting its subject matter.

Along these lines, graphics are retro to a fault. It’s near-impossible to discern good guys from bad …until they charge at you at breakneck speed and in bunches. The alternative of mowing everyone down is just seemingly wrong, plus wastes precious ammo. Run out of ammo, and face the alternative of hopelessly waving a knife/machete at enemies packing serious heat. Sure, one can run for their lives, but that fails a lot more than it succeeds.

The challenge inherent in older games (and those that play homage to them) lies in deciphering AI patterns versus overcoming programming exploits. In 8Days, however, enemies move much quicker than they should, execute cheap shots galore, and kill mercenaries from almost any angle. Per above, the aiming mechanism exacerbates, as fast moving enemies dance around questionable targeting.

Related, environments only make matters worse. Thanks mainly to throwback presentation, it’s very difficult to differentiate depth/height between what is an obstacle or vertical structure. This challenge is one enemies never battle through, thus more reasons to die needlessly.

Finally – and the nail in the coffin – is the ridiculous ‘start with only 1 bar of health’ level restart system. Meaning, if and when you ultimately suffer at the hands of the ridiculous AI, restarting a level means back to the beginning and but 1 of 3 health bars. Yes, even Contra was a one-and-done hit system. But Contra also didn’t endlessly cheat, suffer from poor programming, and make it near-impossible to determine what is actually safe cover. I understand the above is harsh, but it’s hard not to be. There’s a glut of retro style, deliberately challenging games out there, and 8Days is at the bottom of the ladder. Even with coop mode, unless you find the violence surprisingly comical and/or can’t have enough of this genre, there’s little to keep one coming back.

It’s overly hard, plagued by poor textures and enemy AI, and the aiming mechanism is atrocious.

Coop mode gives it legs, but few will have the patience to survive more than a few short gameplay sessions.

8Days is a game inspired by better ones in the same genre, and fails to deliver on its promises. Poor aiming, cheat AI, and texture difficulties create a frustrating experience that is more hair pulling than deliberately challenging.