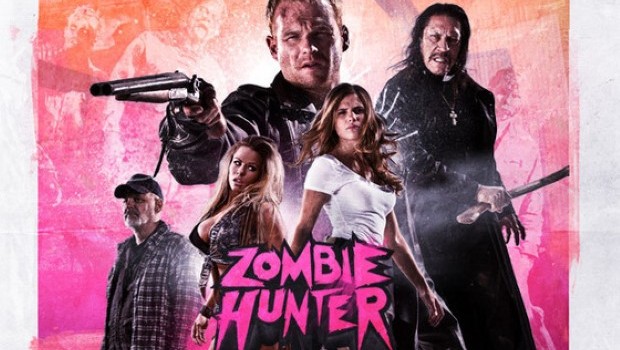 Summary: Zombie hunter ticks all of the requisite exploitation film boxes – A grizzly hero, buxom ladies, hotted up cars and liberal geysers of claret - But for some the entire exercise just fails to come together in a satisfying manner.

Upon glancing at the cover and advertising materials for Zombie Hunter you’d be forgiven for thinking that it was yet another Grindhouse-esque vehicle showcasing the talents of genre favourite Danny Trejo; this has proven to be a very astute marketing ploy by the producers, capitalising on Trejo’s popularity to garner more viewers than this low budget entry in the horror field would otherwise muster on its own merits.

Unfortunately  for those coming to the party for this reason (But not exactly surprisingly), Trejo’s role as Father Jésus  amounts to little more than a glorified cameo, with the aptly named Hunter (Played by Melbourne boy Martin Copping) actually being the main protagonist.

The film follows Hunter (Geddit? As in Zombie Hunter!) as he traverses post apocalyptic America behind the wheel of his oh so masculine muscle car; a year earlier mankind fell prey to the debilitating effects of a new street drug going by the name of NATAS (Yep, that was honestly the best name the screenwriter could come up with for the evil drug) Where addicts quickly found themselves turned into the ravenous undead. 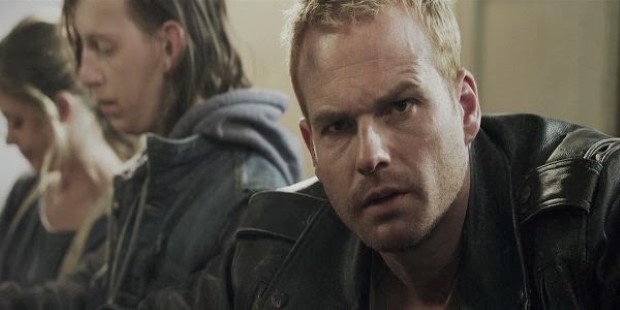 Flash forward to present day and Hunter, having not had any human contact for over six months, is under the impression that he may be the last man on earth, staving off boredom by decapitating ghouls he encounters on his journey through the barren wasteland and imbibing copious amounts of alcohol… At least until he’s shot by a survivor whilst speeding down a desert road.

Awakening in a camp populated by six other survivors – Trejo’s Father Jésus as well as a handful of clichéd cardboard cut-out characters such as sleazy fat guy, the coquettish virgin, the vixen, the younger sibling and the mechanic – Hunter soon finds himself the reluctant leader of the group as they’re forced to leave their compound and attempt safe passage to a nearby airfield; an earlier attempt resulted in a vicious run-in with not only the shambling undead but also a tribe of cannibalistic murderers led by a chainsaw wielding clown. 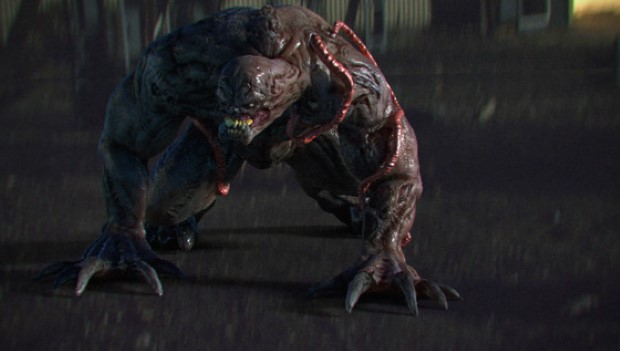 It’s pretty easy to see which corner of the market Zombie Hunter hopes to capture, with its Mad Max meets Dawn of the Dead plot structure, but unfortunately the film falls short in just about every area and fails to appeal to even those who revel in knowingly schlocky Grindhouse throwbacks like Hobo With a Shotgun and Trejo’s own Machete series.

Whilst low budget (The film even held a Kickstarter campaign to raise an additional $45,000 for visual effects and editing costs) Zombie Hunter just doesn’t quite pull off the smarmy charm that other films of its ilk use to rise above their meagre budgets; the acting is passable at best and downright atrocious at worst, the special effects used for the zombies range from humbly effective to amounting to little more than Papier Mâché masks that make the make-up in Troma films look accomplished and the CGI for the Hybrid creatures come off as a slightly more advanced Playstation cut scene of Resident Evil’s Tyrant awkwardly spliced into the film. 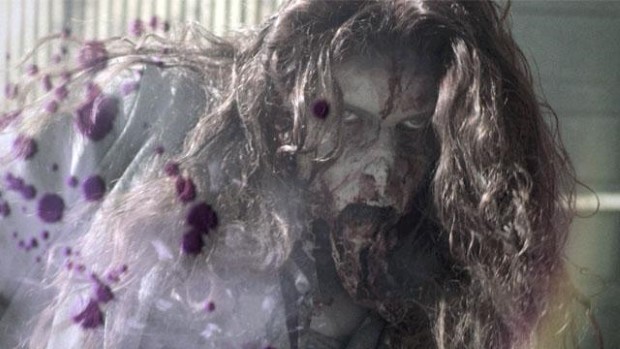 These technological shortcomings would be mitigated somewhat if Zombie Hunter had a unique and interesting story to push everything along but again the films fails in this regard, with the plodding opening and exposition scenes taking much too long to lead to the real meat of the film – The zombie attacks, which are filmed in the same slowed down/sped up style that Zack Snyder employed for 300.

Some of the action scenes are competently shot, but the poor effects used for the mostly CGI blood and the annoying digital spray that hits the camera lens serve to detract from even these meagre moments of enjoyment. 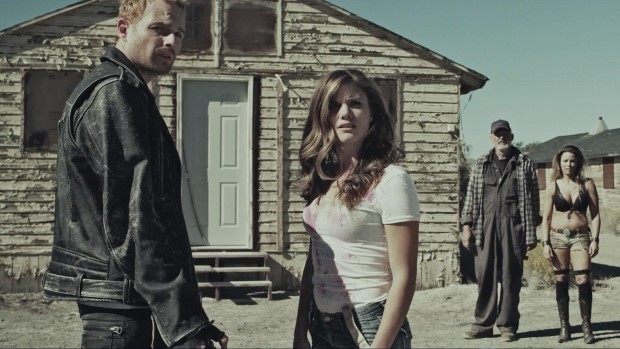 There’s also an annoyingly overused magenta filter that’s overlayed over many scenes and one entire sequence that is a prime example of dodgy digital darkening of daylight footage to evoke the effect of it being night, as well as what is quite possibly the least erotic lovemaking scene in the history of film, with the camera lingering on Hunter’s spasmodically kicking boots (Yep, our hero somehow manages to take off his pants over his boots when making whoopee) as he flails awkwardly atop of the coy virgin character before pushing her off the bed and passing out – It’d almost be funny if the film didn’t play it all so po-faced. 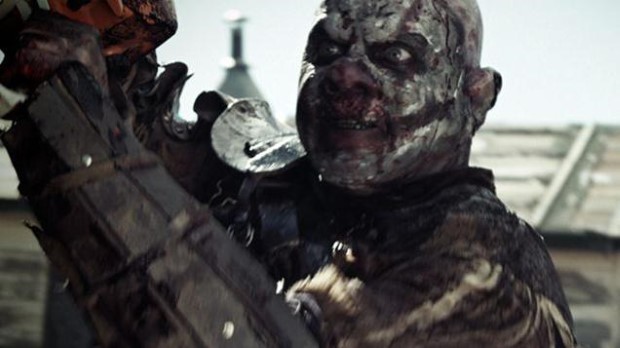 Zombie Hunter comes with a surprisingly sharp and detailed 1080p transfer that accentuates the glossy look of this digitally shot feature. The colour palette is kind of all over the place, with vivid splashes of pink and purple blood contrasting heavily against the washed out scenery, but this is more of a stylistic choice (And an admittedly effective one) rather than being a mark against the quality of the transfer. The area where the film definitely suffers the most visually is in any scene where the jerkily animated Hybrids appear, with the high definition transfer only serving to highlight the low res textures and overall cheap quality of the CGI.

In the audio department Zombie Hunter surprisingly shines for the most part; certain scenes, such as one featuring a major explosion, lack a certain “oomph” but overall the lossless DTS-HD Master Audio 5.1 mix handles the myriad of roaring engines, shotgun blasts and zombie moans quite well, with no discernible issues in regards to channel directionality or audible bleed through and wide dynamic range. Overall, an extremely competent transfer from Transmission that is arguably better than a film of this calibre deserves.

Zombie Hunter is the very definition of a bare bones release; there’s not even any other option on the title screen aside from ‘Play’, so good luck if you want to change the audio output or select a specific chapter.

It really pains me to be so harsh on Zombie Hunter, as many of my favourite films are low budget horrors and I had high expectations, particularly due to Trejo’s involvement and the obvious enthusiasm for the tropes of the genre displayed by Director/ Writer Kevin King and Editor Chris Le during their Kickstarter campaign video. Zombie Hunter ticks all of the requisite exploitation film boxes – A grizzly hero, buxom scantily clad ladies, hotted up cars and liberal geysers of claret – But for some reason I can’t quite put my finger on the entire exercise just fails to come together in a satisfying manner, feeling hollow and vapid for the most part.

The acing in particular is horrendously bad (Even Trejo seems to be phoning it in), the pacing is disjointed and the over stylised visuals quickly become annoying. The film’s obvious cult sensibilities can’t elevate it above the shamelessly derivative mess that is the final result and instead of being gleefully over the top like some of its contemporaries, Zombie Hunter’s low budget trappings merely serve to highlight just how cheap the overall affair really is. 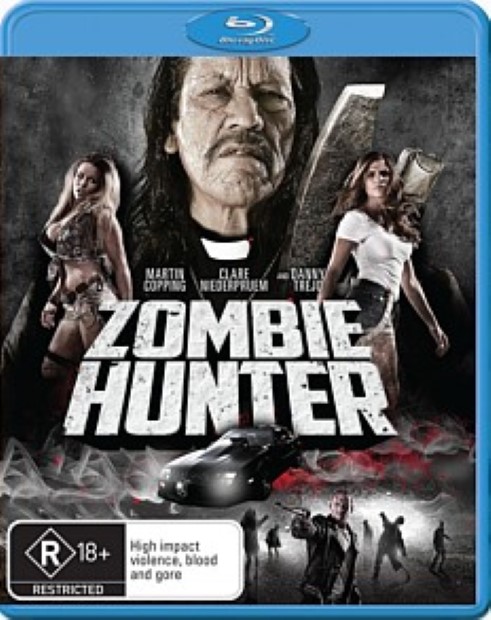