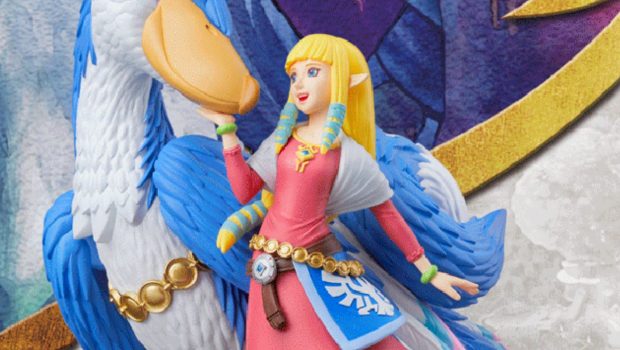 Every legend has an origin – and soon players can follow the earliest tale in The Legend of Zelda timeline when The Legend of Zelda: Skyward Sword HD launches on Nintendo Switch. The HD version of this classic adventure features enhanced performance, smoother motion controls, and newly-added button controls.

Alongside the game and a set of Joy-Con controllers themed after the Master Sword and Hylian Shield, an amiibo figure depicting Link’s childhood friend Zelda and her trusty blue Loftwing will be available on 16th July at select retailers for a suggested retail price of AU$34.95*. Australian and New Zealand consumers will also be able to purchase the amiibo figure from the My Nintendo Store for AU$34.95 / NZ$39.95. More information can be found in the The Legend of Zelda: Skyward Sword HD – amiibo (Nintendo Switch).

The Zelda & Loftwing amiibo can be used at any time while exploring the overworld or dungeons to create a checkpoint and return to the sky. Tapping the amiibo again while in the sky or visiting one of the many floating islands above the clouds lets the player return to the checkpoint previously created**.

The Zelda & Loftwing amiibo figure will be released on 16th July alongside The Legend of Zelda: Skyward Sword HD. Using the amiibo in the game will create a checkpoint to travel between the sky and the world below.