Summary: A deftly shot, delightfully self aware and amusing entry into the horror genre.

Directed by Adam Wingard (A Horrible Way to Die) and featuring performances by fellow mumblegore directors such as Joe Swanberg and Ti West (The House of the Devil), fans of indie horror, particularly the film V/H/S, will be delighted to see three of the major collaborators behind the film back together for another project, albeit with two of them firmly in front of the camera this time around. 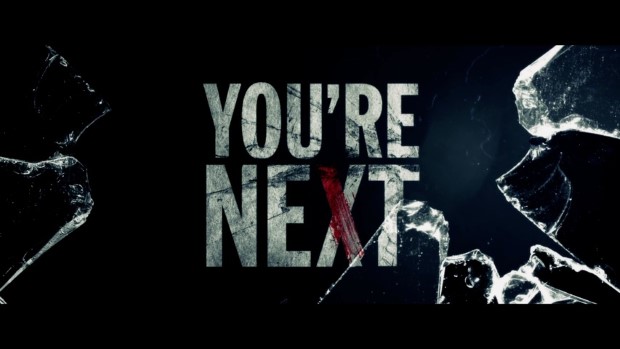 The film opens with a couple being slaughtered in their isolated country retreat, seemingly setting the tone of the film before shifting gears to focus on an acrimonious familial gathering for the parent’s wedding anniversary for the better part of the next half hour; these scenes perfectly capture the snarky retorts and muttered insults that are all so common when large families reunite, with simmering resentment and dormant sibling rivalries quickly coming to the fore.

The slow and steady build up to the inevitable carnage is primarily to focus on introducing and building the characters that make up the Davison family, which is to be commended in regards to messing with the expected narrative structure of this kind of film; any questions raised about the initial slaughter and the murderous home invaders with a penchant for wearing creepy animal masks and daubing “You’re Next!” on the walls with their victims blood take a backseat to allow the maladjusted dynamic of the Davison clan to take precedence. 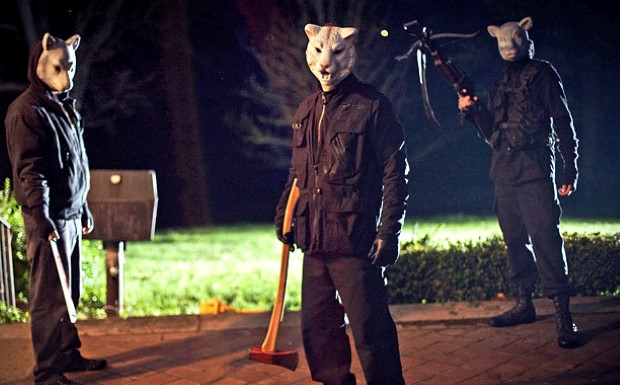 Once the family has all arrived at the country manor and have settled into their respective roles – The emotionally fragile mother, the antagonistic and smarmy older brother, the slightly shady younger sibling, the often overlooked only daughter, the definitive example of a middle child and their respective partners –  The film suddenly kicks into gear when a sit down dinner is suddenly interrupted by a flurry of arrows, effectively putting an end to the petty (But often quite amusing) bickering that has characterised the family up until this point.

Under siege by unknown assailants with murky motives, the family must put aside their differences and band together if they expect to have any chance of surviving the attack, with their luxurious family retreat quickly becoming a death trap due to some strategically placed traps and the seemingly meticulously planned assault by the masked attackers. 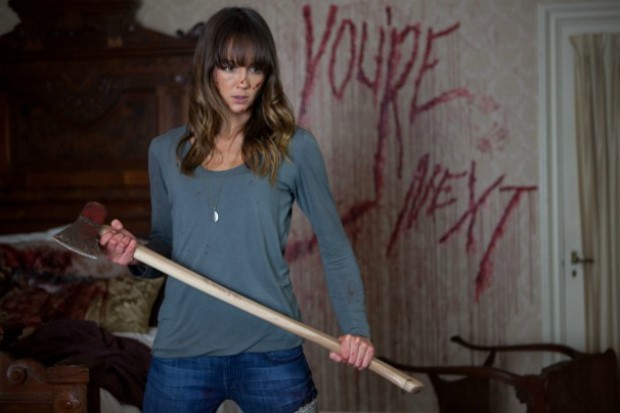 As the members of the family and their guests begin to be picked off, most of the survivors react in the manner expected of horror movie cannon fodder –  Screaming and running around in a panic, limbs flailing, with one major exception: Middle brother Crispian’s (A.J Bowen, A Horrible Way to Die) new girlfriend Erin (Sharni Vinson, Home and Away), an unassuming character who soon proves herself to be the ultimate subversion of the final girl trope due to her survivalist upbringing in the Australian outback, turning the tables on the assailants in a particularly vicious manner through both the ingenious use of hastily assembled traps and brute, physical force. 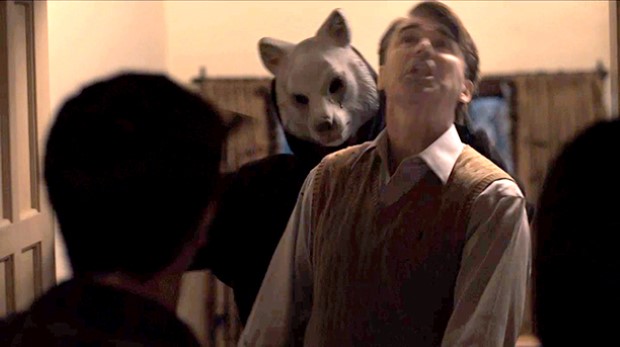 Despite not really being all that innovative or original when held up against other similar home invasion films, You’re Next is an entertaining and, above all, fun pitch black comedy with an equal amount of humourous moments and graphic violence to appeal to gorehounds.

Some of the performances can come off as a little stilted and the two major “big twists” are signposted pretty early on and, as a consequence, fail to be much of a revelation, but You’re Next makes up for these minor shortcomings with a tightly constructed script, some pretty neat dispatching of the characters and an exuberant atmosphere that permeates throughout the entire film. 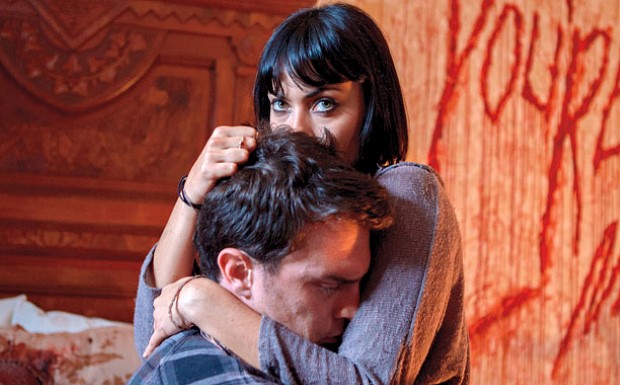 You’re Next comes with a solid 1080p HD transfer that shows fine detail and textures with exceptional clarity; aside from a few brief instances of burring due to movement, the film suffers from no major visual issues, with contrast and black levels finely tuned to take full advantage of the film’s creepy aesthetic, taking place in near darkness for a good portion of the film. These darker scenes show no evidence of crushing or compression and the image in brighter scenes are natural and crisp, albeit with an intentionally muted colour palette.

The audio is presented as a lossless DTS-HD 5.1 Master Audio track and sounds absolutely superb; the quality of the audio track often makes or breaks a horror film and You’re next comes with an immersive and robust mix that accentuates the jump scares and attack sequences. Dialogue is clearly delineated with no evidence of audible bleed through and nice directionality through the channels, and the music, particularly the recurring motif of a CD stuck on repeat and the moody score, is exemplary in its presentation. Overall, an extremely fine Blu-ray transfer from the people at Icon. 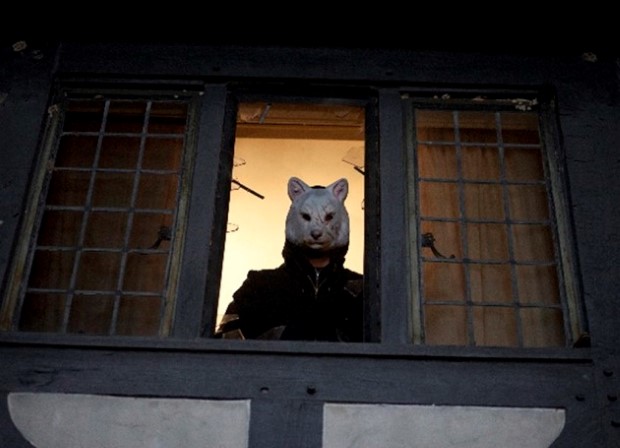 Disappointingly this release of You’re Next continues Icon’s confusing practise of excising any supplemental features that were included on the film’s international versions; it’s practically a prerequisite for most films to have additional features on their home releases these days and it’s even more frustrating for the viewer when they realise that they’re missing out on material available elsewhere solely due to the discretion of their region’s distributor.

You’re Next takes a handful of traditional tropes from the horror genre and playfully subverts them in an often fresh and amusing way. It’s abundantly clear that Wingard  and Co. were having a lot of fun making the film and this enthusiasm translates to the screen and, by proxy, the viewing experience.

A deftly shot, delightfully self aware and amusing entry into the horror genre, You’re Next won’t be to everyone’s tastes, particularly the slow burn of the first third of the narrative, but if watching a character suffer the inauspicious fate of wearing an operational blender as a hat sounds like your idea of fun then you’ll find a lot to enjoy with this charming little indie feature. Recommended. 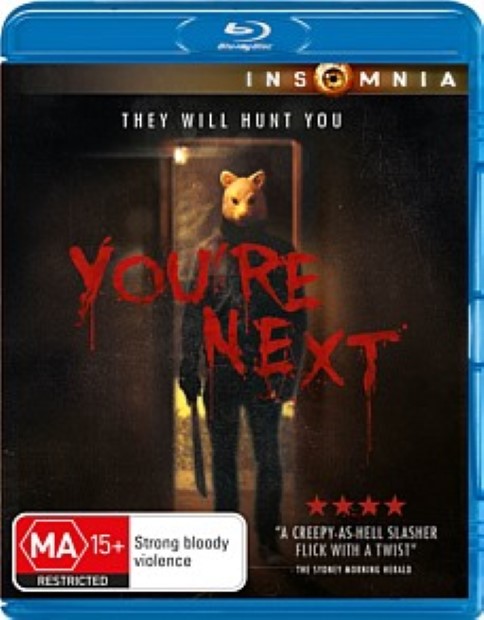