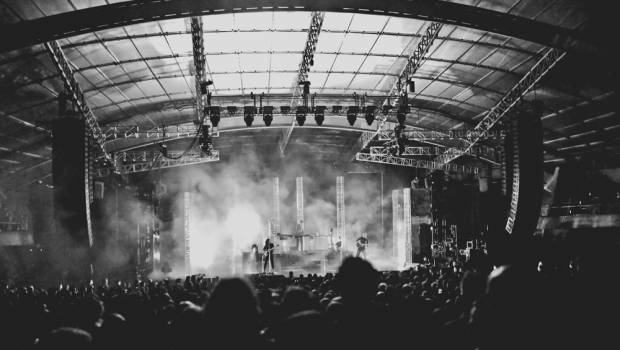 The extraordinary outdoor performance to more than 12,000 people on Saturday night at Sidney Myer Music Bowl, and their intimate encore Forum Melbourne show on Sunday night treated fans to hit singles such as ‘On Hold’ and ‘I Dare You’ from the band’s latest album I See You (out now through Young Turks), as well as fan favourites such as ‘Islands’ and ‘Crystalised’.
“The crowd were engaged for the whole set and hung on every word they sung.
The xx sounded phenomenal live and the 10,000 fans lapped up every song.”
– Beat Magazine

“The xx create so much more than just music. It’s sonic art and they’re
technically perfect, let’s face it.” – The Music

“As the beautiful ‘Angels’ began – just like a high school prom – all the couples
turned to each other and slow-danced. Love was in the air; arms linked across
the crowd for a mass sing-along of the fan favourite, while my newly-married friends
lost themselves in their wedding song, performed live this time. The feels – this band
is too pure for this world.” – STACK

Tune into triple j at 4.30pm this afternoon to hear Gen and Lewis discuss all things The xx with the band themselves.

The xx are performing in Brisbane on Wednesday night (17 Jan) and Sydney on Saturday night (20 Jan) and with both Melbourne shows selling out, fans are urged to buy tickets now!

Also joining The xx as special guest is Perth born KUČKA, whose addictively ethereal electronic-pop has taken her around the globe in a whirlwind 18 months, leading to collaborations with Flume and Fetty Wap, and live supports for Vince Staples, NAO, Mura Masa and Mount Kimbie.

The xx have partnered with PLUS1 so that $1 from every ticket purchased will go towards local LGBT+ programs in each city of the tour. Visit plus1.org for more information on the organisation.