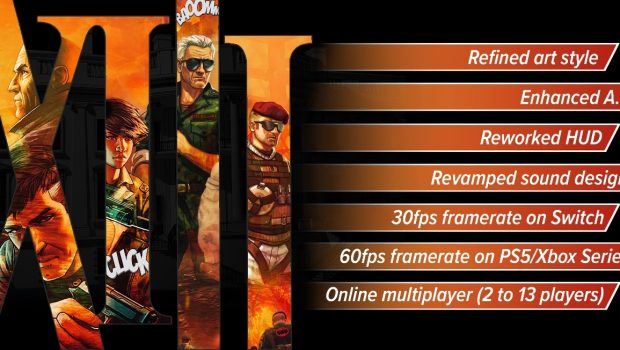 Microids is delighted to announce the release of XIII Remake on Nintendo Switch, PlayStation 5 and Xbox Series X|S. Owners of the PlayStation 4, Xbox One and PC versions can update their game free of charge to benefit from numerous upgrades and additional features.

As a reminder, this title is a remake of the cult classic cell-shaded FPS (First Person Shooter) released in 2003 adapted from the first five albums of the eponymous comic book illustrated by William Vance and written by Jean Van Hamme.

About the Story of XIII:

The country is still in shock after President Sheridan’s assassination.

You wake up injured and with amnesia on the shore of an east coast beach. The only clues about your identity are the number XIII tattooed on your collarbone and the key to a locker. Despite the memory loss, you realise not everything has been forgotten as you seem to have amazing reflexes comparable to a well-trained government agent. You will soon be on your way to uncover your past, discovering in the process your role in the murder of the US president and unveiling the most astonishing conspiracy in the country’s history.

Play as “XIII” – a man who has no memory about his identity – and try to find out the truth regarding the set-up of a major conspiracy. Follow XIII in his search for his identity through a thrilling solo campaign and brutal local multiplayer battles!