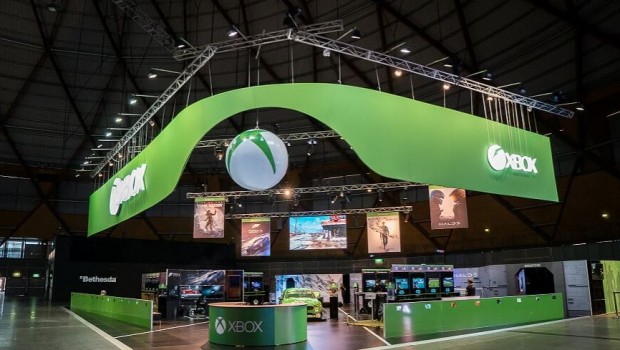 The greatest lineup in Xbox history on full display

This long weekend Xbox is bringing gamers closer to the action than ever before with an epic booth at EB Expo in Sydney. The booth spans over an incredible 700sqm+ and houses a staggering 148 gaming screens showcasing this year’s best titles including:

In addition to these blockbuster titles, we have an awesome selection of independent ID@Xbox titles including: Cuphead The Flame in the Flood Happy Dungeons Tumblestone Killer Instinct Season 2 Gamers can also get their hands on our upcoming Elite Controller to get a feel for how this incredible piece of hardware plays in the real world.

For a taste of the best games line-up in Xbox history and to see our award-winning booth, come down to Sydney Olympic Park, Homebush!

This month, both Xbox One and Xbox 360 Xbox Live Gold Members receive the entire first season of The Walking Dead – A Telltale Games Series, a terrifying and harrowing zombie adventure series, completely free. Additionally, Xbox One Gold Members get Valiant Hearts – The Great War, an adventure game set amongst the real-life horrors of World War I.

Xbox 360 Gold Members get Metal Gear Solid V: Ground Zeroes, the exciting prelude to the smash hit Metal Gear Solid V: The Phantom Pain, out now for Xbox One and Xbox 360. As usual, all games are available only for a limited time, as part of the ongoing Games with Gold program.

Set in the world of Robert Kirkman’s groundbreaking comic-book series, The Walking Dead is the perfect game to play to get yourself ready for the scariest night of the year, available from October 1-31. It’s about making choices – often selecting from a series of lesser evils – in a world where horror lurks around every corner. While the titular zombies are certainly a major threat, the truly scary element to.

For Xbox One Live Gold Members, Valiant Hearts – The Great War is scary in an entirely different way: What if a war you knew nothing about – and could do nothing to stop – completely overturned your world? What would you do? How would you confront it? That’s the challenge facing a group of disparate strangers in Valiant Hearts – The Great War, whose paths cross in unlikely ways through the horror and despair of World War I, across the entirety of Europe.

Finally, in October, Xbox 360 Live Gold Members get to experience Metal Gear Solid V in all its glory, with the exciting series prelude Ground Zeroes. Set in the same world as the recently released Metal Gear Solid V: The Phantom Pain, Ground Zeroes sets the stage for that game by introducing characters, key plot elements, and – most importantly – game mechanics. A tidy balance of stealth, action, and improvisation are at the core of Metal Gear Solid, and Ground Zeroes brilliantly puts that combination on display, tasking players with some critical rescue missions behind enemy lines.

Get ready for some good scares, some harrowing adventures, and a whole lot of deep and engaging gameplay in October and be sure to check out the Xbox Wire for further details.

Including a few of the favourites

We’re excited to unveil the Xbox One 1TB Bundle featuring a few of our favourites from the greatest games lineup in our history: Gears of War: Ultimate Edition, Rare Replay and a full-game download of Ori and the Blind Forest. With 1TB of storage, you can play and store more games than ever, including your Xbox 360 favourites thanks to Xbox One Backward Compatibility.

With the Xbox One 1TB Holiday Bundle, fans can look forward to:

This year we’ve also got an incredible roster of exclusives like Halo 5: Guardians, Rise of the Tomb Raider, and Forza Motorsport 6. With new features added all the time, and the fastest and most social Xbox experience ever coming this November, there’s never been a better time to jump ahead with Xbox One.

The Xbox One 1TB Holiday Bundle will be available starting in October, for more details please be sure to visit the Xbox Wire.

Xbox is offering unmatched value and choice for gamers with a diverse mix of bundles starting at $549 AUD RRP. We’re pleased to announce the Xbox One Rise of the Tomb Raider Bundle – the ultimate Tomb Raider experience that’s perfect for Tomb Raider fans around the world as well as gamers new to the critically acclaimed survival-action series. The bundle features:

Featuring epic, high-octane action moments set in the most beautiful and hostile environments on earth, Rise of the Tomb Raider delivers a cinematic survival action adventure where you will join Lara Croft on her first tomb raiding expedition as she seeks to discover the secret of immortality. The Tactical Survivor Pack, available exclusively in the Rise of the Tomb Raider Xbox One bundle, equips Lara with a new outfit, upgraded abilities and spec-ops tactical gear taken from enemy forces.

The Xbox One Rise of the Tomb Raider Bundle will be available starting in November, to find out more please visit the Xbox Wire.

A console bundle for everyone

This October get your hands on the ultimate LEGO building experience featuring an Xbox One 500GB console and Xbox One The LEGO® Movie Videogame where you can play with a delightful and surprising mix of over 90 characters from the film, including Batman, Superman, the Green Ninja, and Gandalf.

The Xbox One with Kinect Bundle featuring an Xbox One 500GB console, Kinect for Xbox One and full-game downloads of Dance Central Spotlight, Kinect Sports Rivals and Zoo Tycoon will be available this October. Experience the greatest games lineup in Xbox history, including Kinect favourites where you can jump right in.

We’re also thrilled to give fans the opportunity to “welcome home” the ultimate Fallout experience, with the Xbox One Fallout 4 Bundle, featuring a 1TB hard drive, the critically-acclaimed Fallout 4, and a full-game download of Fallout 3. Experience the next generation of open-world gaming from Bethesda Game Studios, the award-winning creators of Fallout 3 and Skyrim. Play and store more games than ever, including Fallout 3 and other Xbox 360 games, with the 1TB hard drive and Xbox One Backward Compatibility.

For further information, be sure to visit the Xbox Wire.

Interested in playing Call of Duty with fellow Game of Thrones fans?

Overdog is a social matching platform that connects like-minded gamers to create better online multiplayer experiences. The service is built to deliver these and an infinite amount of other unique online experiences and has announced that the company’s social matchmaking app for Xbox One will officially launch for gamers in Australia and New Zealand.

With the geographic expansion, users will be able to play their favourite games ­ Call of Duty, Destiny, and FIFA to name a few ­ with other people who share similar interests such as an affiliation to globally recognised musicians, movies, celebrities, and sports teams.

Celebrating the greatest AAA and indie titles this holiday

Xbox is pleased to announce today that we will be a part of PAX Aus 2015!

Running from October 30th to November 1st at the Melbourne Convention Centre, PAX Aus will be a celebration of our best lineup in Xbox history, featuring the ‘Warzone’ multiplayer mode from Halo 5: Guardians, and Rise of the Tomb Raider. In addition to this, we’ll play host to a huge selection of the hottest indie titles that are making their way soon to Xbox.

There are still tickets available on PAX site, so get in quick.