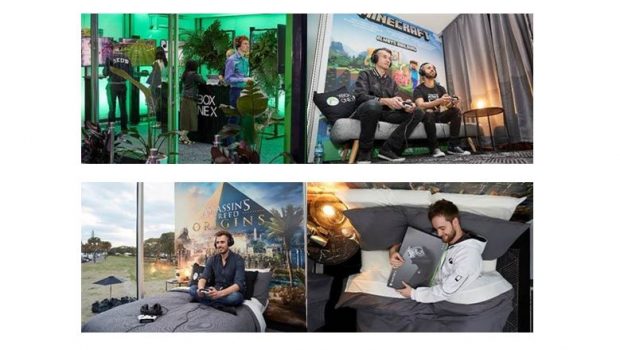 At 8am today, Xbox Australia opened the doors to the Xbox Stay N’ Play – a boutique, gaming-themed sleepover experience that gives fans unhindered access to the world’s most powerful videogame console Xbox One X, days before its official launch on November 7.

Following the initial announcement over a week ago, suites at the first-of-its-kind installation sold out within a matter of hours, with some of Australia’s biggest gamers booking rooms, alongside hundreds of Xbox and entertainment fans of all ages.

Situated in front of the iconic Sydney skyline in Pirrama Park, Pyrmont, the Xbox Stay N’ Play also features a lobby area for walk-in gameplay with the Xbox One X, which will be open 8am until 8pm from today until Sunday 5th November.

“The response to the Xbox Stay N’ Play has been incredible,” said Jeremy Hinton, Business Group Lead at Xbox Australia. “We’re looking forward to welcoming some of Australia’s biggest Xbox fans over the weekend to experience true 4K gaming in a genuinely unique environment, days before we launch the Xbox One X console.”

Xbox One X is available for pre-order now at the Microsoft Store and all good retailers, including JB Hi-Fi, EB Games and Harvey Norman. The Xbox One X will be available for purchase from November 7th.