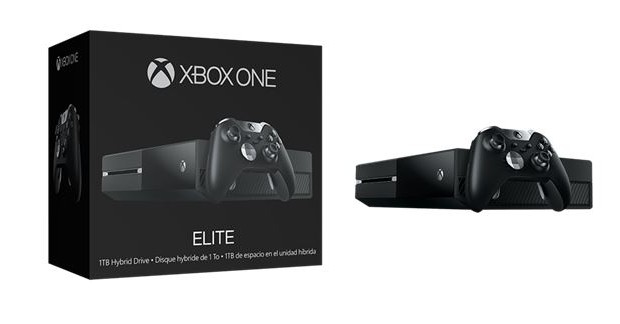 Games and gamers are at the centre of everything we do and we’re always looking for ways to offer the best ways to play on Xbox. Today we’re thrilled to unveil the Xbox One Elite Bundle, the ultimate gaming experience that comes fully loaded and jam packed with premium features to take your gaming to the next level. In addition to a matte finish, the Xbox One Elite Bundle includes a 1TB Solid State Hybrid Drive, which stores frequently-accessed files on a solid state partition and optimises system performance so you can get to the action up to 20 percent faster from energy-saving mode. This means you can spend more time this holiday playing the greatest games in Xbox history, including Halo 5: Guardians, Rise of the Tomb Raider and Forza Motorsport 6.

Even better, every Xbox One Elite Bundle comes with the Xbox Elite Wireless Controller, a new, performance-class controller to meet the needs of today’s competitive gamers on Xbox One and Windows 10. The Xbox Elite Wireless Controller offers fully customisable features, interchangeable paddles, further customisation with the Xbox Accessories app, Hair Trigger Locks and high-performance construction to provide an unparalleled experience every time you game.

For all the latest details and assets for the Xbox One Elite console and Lunar White controller, please visit the Xbox Wire.

The Halo 5: Guardians launch is right around the corner, and we’re excited to unveil the opening cinematic to the game, featuring Fireteam Osiris – the elite team comprised of:
• Spartan Jameson Locke – Before he was a Spartan, Locke was an ONI Acquisitions Specialist – an expert in tracking, asset recovery, and elimination of high value targets
• Spartan Olympia Vale – A child prodigy, Vale’s innate skill in languages led to a career as a Navy liaison with the Sangheili post-war
• Spartan Holly Tanaka – After surviving the glassing of her homeworld, Tanaka joined the Army, looking for a chance to save others from the same fate
• Spartan Edward Buck – During his service as an ODST, Buck’s personnel profile suggested “if he were any better he’d be a Spartan”
In the cinematic, the group receives UNSC orders to recover a high value target and deploy to take on Covenant and Promethean forces in a fierce action sequence – the start to the most ambitious, robust and epic Halo campaign experience yet.

To find out more about the stunning cinematic trailer, or for any other Halo 5: Guardians assets, check out the Xbox Wire.

And don’t forget – there are just mere days to go until the game becomes available to Forza Motorsport 6 Ultimate Edition owners via early access on Sept. 10, so head over to the Xbox Store to get your copy.

Forza fans can get their first taste of the biggest, most comprehensive and realistic game in the Forza franchise to date, with today’s release of the Forza Motorsport 6 demo for all Xbox One owners! The demo features a sample of the 460 cars and 26 tracks found in the game, as well as new features like night racing, genre-defining car handling and physics, cloud-powered Drivatar opponents, and Rivals events where players challenge one another in hot lap competitions.

Everyone who plays the Forza Motorsport 6 demo will automatically get the new Ford GT delivered to their Forza 6 garage at no additional cost.

We’re also announcing the car list for the Fast & Furious Car Pack for Forza Motorsport 6. These cars will be available to Ultimate Edition and Deluxe Edition owners of the game at no additional cost. All other players will be able to purchase this pack separately.

Look for more information on all of the cars in the Forza Motorsport 6 Fast & Furious Car Pack in the near future.

Stay tuned to ForzaMotorsport.net for more updates leading up to launch on Sept. 15.

Borderlands will be supported on Xbox One Backward Compatibility when it launches publicly this November and is available in Preview today, expanding the growing library of Xbox 360 titles available on Xbox One and joining the greatest games line-up in Xbox history.

If you own Borderlands, you’ll be able to play it on your Xbox One and you can carry over your previously-saved files, game add-ons and achievements. Developed by Gearbox Software and published by 2K, bringing Borderlands to Xbox One Backward Compatibility lets you dive back into the loot-filled world of Pandora and pick up your adventure right where you left off on Xbox 360. Battle your way through the world of Pandora with Claptrap, your ever-talkative robot companion, and your fellow Vault Hunters on Xbox Live, no matter which Xbox console they are playing on.

“We are proud to support Xbox One Backward Compatibility by bringing the complete, original Borderlands to Xbox One, including all downloadable content,” said 2K President Christoph Hartmann. “We know many of our fans have put in dozens, even hundreds, of hours exploring the world of Pandora on their Xbox 360, and now they can continue their adventures on Xbox One.”

For any further news regarding Backward Compatibility, stay tuned to the Xbox Wire.

Evolve was one of the most memorable games of the last year, offering a multiplayer experience unlike any other. That’s why we’re so excited to announce that all Xbox Live Gold members can enjoy Evolve for free this weekend as part of the Evolve Free Play Days. Beginning today, September 4th at 5:01 PM AEST, and ending on Monday September 7th at 4:59PM AEST, Gold members in Xbox One markets can join the hunt and play as either a powerful boss Monster or four unique Hunters for free. After the Evolve Free Play Days are over, you can buy the game for 50% off MSRP starting Tuesday, September 8 in Deals with Gold. Even cooler, if you decide to purchase the game, you will be able to start again right where you left off.

Developed by Turtle Rock Studios, creators of Left 4 Dead, Evolve is a 4-versus-1 multiplayer shooter where four Hunters face off against a single, player-controlled Monster. Using strength, size and powerful abilities, kill your human enemies as the Monster, or choose one of four unique Hunter classes (Assault, Trapper, Medic and Support) and team up to take down the evolving beast. It’s survival of the fittest, and any side can win. Choose your side. With multiple character and monster types to choose from, and perks to earn, Evolve suits an array of player styles.

During Free Play Days all players can also access the Predator Skin Mega Bundle, which includes camouflage weapon skins for sixteen Hunters. Players will also have the opportunity to experience add-on characters for free including the Behemoth Monster, the newly released Trapper, Jack, Lennox the Assault and more. Plus for the first time, Meteor Goliath – a fiery adaptation of the original Goliath monster – will be released and playable.

Best of all, the progress you make and every achievement you earn in Evolve will be saved when Free Play Days ends, and will be waiting for you when you return to the hunt. So, call all of your friends and form your hunting party and join the world’s premier gaming community for the monster hunt of a lifetime.