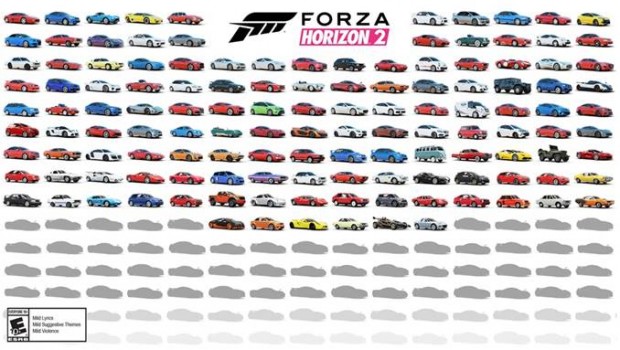 This week we are announcing another 15 radical rides, all specifically built for Xbox One,

Here we are at week three of our Forza Horizon 2 car reveals. In case you haven’t heard, Forza Horizon 2 will include more than 200 cars at launch. This week we are announcing another 15 radical rides, all specifically built for Xbox One, that are ready to tear up the countryside of southern Europe on October 2nd.

Nearly every production car from this week’s list has evolved from notable racing history. In 1992, Lancia took its sixth consecutive manufacturer’s title in World Rally competition. The homologated version of the 1992 Lancia Delta HF Integrale EVO found in the game absolutely screams to dust up the back roads. Mercedes needed to keep pace with the BMW M3 in the Group A Touring Car Championship and its efforts resulted in the 1990 Mercedes-Benz 190E 2.5-16 Evolution II; after one look, all you need to say is, “That wing.”  The Bugatti Veyron Super Sport and the Hennessey Venom GT have all your speed records covered. Looking to manage your throttle control? Either of these rides will challenge you to reel them in.

Where Dreams are Driven: The Inspiring Story of Mario Bonfante Jr.

Life doesn’t always work out the way we planned. Mario Bonfante Jr. found that out the hard way after his racing career was cut short in a tragic accident, but he refused to let it derail his dream. Fuelled by his passion for racing, a fiercely competitive nature, some pretty impressive engineering skills, and his love of Forza Motorsport, Mario has not only found a way back onto the race track, he’s proven to the world (and himself) that the resilient human spirit will always triumph over tragedy. Forza Motorsport is inspired by drivers like Mario, a born competitor who at a young age has already proven himself impossible to beat. Check out the first of a two-part video on Mario’s story below, then visit Complex.com to hear more about how he conquered life’s daunting adversities and what advice he has for other young people who aspire to achieve their most ambitious dreams.

A taste of what’s the come at Gamescom 2014, we can’t wait to share more with you

It’s officially August, and that means it’s nearly time for Gamescom, the world’s busiest gaming convention. This year, we’re kickstarting our week in Cologne, Germany, with a live special you can enjoy at home.

Join Xbox Live’s Aceybongos, and the creators of Call of Duty: Advanced Warfare for the world broadcast premiere of the next generation of Call of Duty multiplayer during a special live event streamed on Xbox Live.

Tune in on Tuesday morning, August 12th at 3:00AM to see Sledgehammer Games present the exclusive live reveal of Call of Duty: Advanced Warfare multiplayer, featuring exclusive interviews and the world premiere of the new multiplayer trailer.