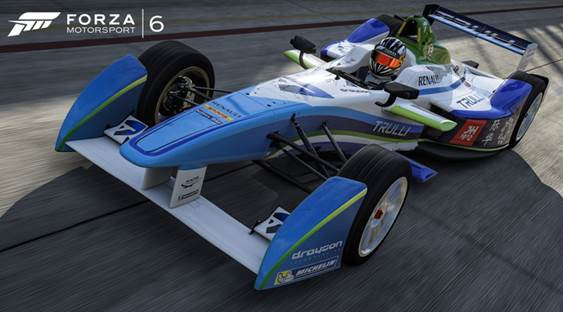 Starting now and leading up to the release of Forza Motorsport 6 on Sept. 15, we’ll be revealing more details each week on the full car list for the game, including additional information on the new tracks being brought to the racing world.

The Forza Garage announcement kicks off with a bang with ten FIA Formula E cars making their debut in Forza Motorsport 6. The original 2014 Renault Spark SRT_01E made its worldwide debut in Forza Motorsport 5 as a DLC car – this time, the entire field of the 2014/2015 FIA Formula E season will be represented for the first time in a console racing game.

Take a look at some of the cars below:

For all the latest Forza news and upcoming announcements around Forza Motorsport 6, please check the Xbox Wire.

New Xbox Features in Preview on Windows 10 and Xbox One

More fantastic features launching this month, have a look below.

Earlier this month, big announcements were made at E3 about bringing two highly-anticipated features to Xbox One preview program members—Xbox One Backward Compatibility and game streaming from your Xbox One to a Windows 10 PC. This month there are more new Xbox on Windows 10 features launching in preview this month.

First up, new features for the Xbox on Windows 10 app:

Please continue sending your feedback on the two new features we launched in Xbox One preview earlier this month – Xbox One Backward Compatibility and game streaming. In addition, the team is continuing to test the Miracast functionality in the Wireless Display app and appreciates your patience while we iron out the kinks.

Stay tuned to the Xbox Wire to stay up to date with all the latest Xbox features coming your way.

Details for the next big event!

In early August, the collective eyes of the gaming world will look toward Cologne, Germany for gamescom, the largest consumer gaming show on earth. Xbox will be there in full force for a variety of events, many of which you can watch online if you’re not able to make it to the show. It’s going to be a fun, exciting time in Cologne, so we really hope you can join us either in-person or online. See you in Germany!

During our E3 2015 Xbox Briefing, we shared the first part of our vision for the future of Xbox gaming. That will continue when the Xbox Team takes the stage the evening before gamescom officially kicks off to share the latest on the games coming to Xbox One, including highly anticipated titles like Scalebound, Quantum Break, and Crackdown. We’ll take a closer look at those and other upcoming games, as well as share some exciting announcements. So tune in to the gamescom 2015 Xbox Briefing on Xbox One, Xbox.com, Xbox 360, and Windows Phone to get the latest news and see some hot trailers and demos.

The Xbox booth at gamescom

gamescom is the world’s largest consumer video game show, giving fans who purchase tickets the chance to take a closer look at the future of gaming. Come join us in the Xbox booth on the show floor to go hands-on with the greatest line-up in Xbox history. From Halo 5: Guardians and Forza Motorsport 6 to Rise of the Tomb Raider, we’ve got some amazing titles for you to play in the booth and watch in our comfortable theatre. Get an early taste of the games you’ll be enjoying, both this holiday and in 2016.

If you’re in Cologne, come join us in the Xbox booth on the show floor to go hands-on with the greatest line-up in Xbox history.

We’ve got an amazing line-up planned for gamescom 2015 and can’t wait to share it with you. Stay tuned to the Xbox Wire for all the latest updates, and get ready for a year of awesome Xbox gaming!

Watch the MINECON livestream this weekend on Xbox with Twitch

MINECON will arrive this weekend and from July 4-5, players of all ages and all corners of the globe will gather in London to celebrate Minecraft and its community.

MINECON will host Minecraft-related discussion panels and gameplay sessions, as well as keynote speeches from members of the community, building contests, costume contests and exhibits, making this the biggest event yet.

The team at Mojang invites you to tune in to the show throughout the weekend through the official livestream, which will be hosted on Xbox One and Xbox 360 through the Twitch app and available on Twitch.tv.

In addition fans can see events as they happen on the Mojang YouTube Channel.

Three streams will be live at twitch.tv/minecon throughout the weekend:

The full viewing schedule is as follows, all times are in AEST:

For all the latest Minecraft news and everything out of MINECON 2015, check out the Xbox Wire.