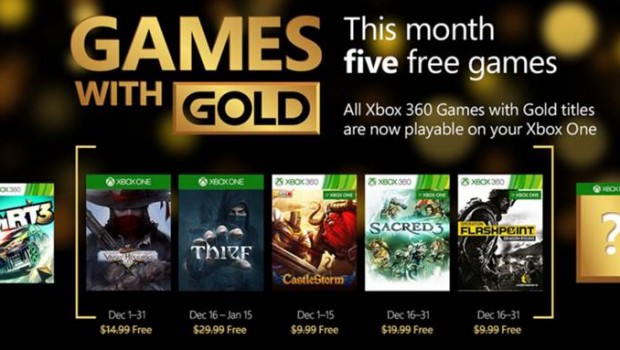 Close out an Awesome Year with December’s Games with Gold

Tis the season to be playing

If you’re into spending your holidays on grand adventures without spending a dime of your hard-earned cash, then Games with Gold has your back! In 2015 alone, Xbox Live Gold members have saved over $1000 with Games with Gold on Xbox One and Xbox 360. It’s only getting better in 2016 now that Xbox One members get double the free games every month with Backward Compatibility. With Xbox One Backward Compatibility play multiplayer with your friends no matter which console they’re on and enjoy Xbox 360 games with the advanced features of your Xbox One, including Game DVR, Screenshots, and in-home streaming to Windows 10. Xbox One owners can download their free Xbox 360 Games with Gold from Xbox.com/GameswithGold or from their Xbox 360 console.

In December on Xbox One, we kick things off with epic action-role-playing game The Incredible Adventures of Van Helsing. There’s plenty of gameplay at your fingertips from the get-go here, combining combat, character development, a deep story, and plenty of deadly action in a single package. Then we move on to Thief, the blockbuster reboot of the beloved action-stealth series – and it challenges your mind as much as your nerves as you take on tough traps and merciless guards.

On Xbox 360 and Xbox One with Backward Compatibility, Games with Gold offers up CastleStormto start the holiday season. A tower defence title with a twist, CastleStorm’s colourful graphics and charming aesthetic will keep any player engaged for hours on end. And when those hours are finished, Xbox 360 gamers still get another free title in Sacred 3, an exciting hack-and-slash medieval fantasy title with four-player cooperative modes both online and off – so you can, you know, chop bad guys up with your friends. And as an extra gift for the holidays Gold members can get Operation Flashpoint: Dragon Rising free the second half of the month. What’s not to like!

As usual, all games are available only for a limited time, as part of the ongoing Games with Gold program – so don’t let the holiday festivities slow you down. Get playing!

For a closer look at the games available, please visit the Xbox Wire.

Whether you’re looking to race, shoot or survive an apocalypse, there’s something here for everyone.

Backward Compatibility for Xbox One is here, and the list of supported games is a pretty long one. Here’s a look at some of our favourite Xbox Live Arcade games, ranging from ‘90s classics to modern masterpieces. Whether you’re looking to race, shoot or survive an apocalypse, there’s something here for everyone.

Banjo-Kazooie: Developer Rare’s famous bear and bird first made their debut in 1998, and this classic platformer still holds up. The game is split into nine levels, where you must gather musical notes and jigsaw pieces (called “Jiggies”) to progress. Stars Banjo and Kazooie are occasionally aided by their friend Mumbo Jumbo – a shaman who can use magical powers to transform them into several creatures like termites, pumpkins, bees, walruses and crocodiles.

Beyond Good & Evil HD: An HD remake of one of the original Xbox’s sleeper masterpieces, Beyond Good & Evil HD has you playing as Jade, a young investigative reporter in the midst of exposing a government conspiracy. Joined by your loyal pig friend Pey’j, you set out in this action-adventure to save your planet and its inhabitants. It’s a brilliant, surreal example of games at their finest.

Castle Crashers: One of the games that started it all on Xbox Live, Castle Crashers is a side-scrolling 2D beat-‘em- up that has you battle your way across frozen tundras, deadly lava fields and rival kingdoms with up to three other players. There’s a nicely varied arsenal of combos and magical attacks to choose from, and the art from Dan Paladin is the stuff that 2D dreams are made of.

Doom: This is the first-person shooter that (along with Wolfenstein 3D) started an FPS revolution! The plot is simple: You’re a Marine stationed on Mars when a military experiment goes horribly wrong… and your mission is to blast your way to freedom. You’ll go up against Hell’s army, which includes brutal cacodemons and undead Marines; fortunately, your arsenal of weapons includes the infamous BFG 9000, among others. Online deathmatch lets you battle your friends for dominance of the leaderboards, or team-up with a friend in co-op.

Earthworm Jim HD: Hold off on that de-worming for just a moment: Earthworm Jim is back, and this time he’s… still a worm. For the first time, this version of the game lets you grab friends and combine forces for four-player co-op, locally or online. Experience all of the original levels, zany gameplay and a remastered version of the cult classic soundtrack. You’ll get brand new enemies and locations to boot, making this one a no-brainer.

Ikaruga: This wild shooter is based on an elegantly executed concept: The enemies come in one of two polarities – black or white – and the player can flip their ship between either polarities at will. When the player ship is black, it may absorb black bullets, but it takes longer to shoot down black ships (and vice versa for white). The result is an intense, thumb-testing battle of brains and brawn – with five levels, cooperative multiplayer, leaderboards, achievements and the option to record and replay levels.

Metal Slug 3: Metal Slug 3 comes to Xbox One in all of its 2D glory. A Japanese cartoon interpretation of classic American action movies like “Rambo” and “Commando,” Metal Slug 3boasts some spectacularly detailed 2D pixel graphics, animation and pick-up-and-play arcade-style action. Lots of things will go boom, and you can team up with another player for some co-op blasting.

Monkey Island: Special Edition: Wannabe pirate Guybrush Threepwood stars in what is undoubtedly one of the finest point-and-click adventures ever devised. He’s on a quest to become the most infamous pirate in the Caribbean, and this remastered edition faithfully re-imagines the internationally acclaimed classic pirate adventure from LucasArts in gorgeous HD. With its new hand-drawn art style, a full voiceover by members of the original Monkey Island franchise cast, and a remastered musical score, you’ll be swashbuckling in your living room like never before.

N+: From Toronto-based developer Metanet Software, N+ is truly the action-platformer deconstructed. With more than 400 levels, a custom level editor that lets you build your own challenges and share them with friends, leaderboards, achievements, the ability to upload your high score runs, and several distinctive flavours of multiplayer, N+ is a supreme test of your gaming precision and mettle.

Perfect Dark: A spiritual successor to the classic GoldenEye 007, Perfect Dark is a spy thriller and action game rolled into one. You’ll uncover amazing gadgets and weapons as secret agent Joanna Dark, and everything in the game has a new coat of paint, thanks to this amazing remaster – not to mention multiplayer modes playable across the globe!

Plants vs. Zombies: Perhaps the most-played tower defence game ever created, Plants vs. Zombies turns you into a homeowner who must use a variety of different plants to prevent an army of zombies from entering your house and eating your brain for dinner.

R-Type Dimensions: Those looking for a side-scrolling space shooter fix need look no further. R-Type Dimensions includes coin-op classics R-Type and R-Type II together in one journey that has you piloting through all 14 alien-infested stages – in their original 2D form, or with all-new 3D graphics. Both Classic and Infinite modes can be played as single-player or multiplayer missions, either locally or online.

Super Meat Boy: Weak thumbs need not apply, as Super Meat Boy is as intense as platformers come. Taking the reins of an animated cube of meat, you’re trying to save your girlfriend (who is made of bandages) from an evil, tuxedo-clad foetus in a jar. Super Meat Boy brings the old-school challenge of classic retro titles we all know and love, and streamlines them down to straightforward twitch reflex platforming.

You can check out more information on all of these classics on the Xbox Wire.