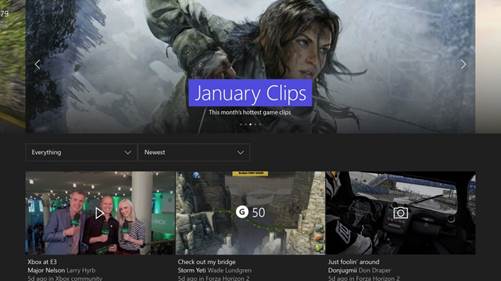 Coming in February for all users

In November, we transformed Xbox One to make it the fastest and most social Xbox experience ever. We continue to evolve the Xbox experience based on your feedback and I’m excited to announce the first of a set of new features releasing in 2016. Rolling out to the Xbox One Preview audience now, and to Windows 10 PC & mobile Xbox Beta app members next week, are a host of updates. This month, we’re focused on continuing to improve social features to help you stay connected to the Xbox Live community across console and PC, while bringing these experiences closer together.

Brand new experiences and updates which will start to rollout to Xbox One Preview:

To see the full list of new additions to Xbox One and the Xbox App, please visit the Xbox Wire.

Here’s What’s in Store for Xbox One Backward Compatibility

9 more titles added, including The Witcher 2: Assassins of Kings

Based on your feedback, the Xbox Engineering team will start to pilot a new way to launch Xbox One Backward Compatibility titles. Starting today, we’ll release titles as they become available, rather than a set monthly launch date. What this means for you is that you won’t have to wait to find out the latest titles; we’ll release whatever is available, when they’re available, once each title has received the engineering and publisher stamp of approval.

We hope these changes give you even more opportunity to relive some of your favourite Xbox 360 titles on Xbox One. As always, we look forward to hearing your feedback.

To view the list of new additions, please visit the Xbox Wire,

Includes a 1TB DD and a digital copy of The Division

Take back New York City with the Xbox One Tom Clancy’s The Division Bundle, available in Australia at participating retailers, including the Microsoft Store, on March 1 for $549 AUD RRP.

We’re committed to delivering gamers the experiences and value they can’t find on any other platform. With a 1TB hard drive coupled with the greatest games line-up in Xbox history, including Halo 5: Guardians, Tom Clancy’s Rainbow Six Siege, Quantum Break and ReCore, there’s something for everyone.

For any assets you may need, please visit the Xbox Wire.

Free skins and maps for all!

Following on the heels of two free content releases, Halo 5: Guardians is kicking off the New Year with a bang. Infinity’s Armoury delivers REQs straight from the arsenal of the most powerful space vessel in the UNSC fleet, along with new battlegrounds for both Arena and Warzone Assault. Equip weapons with intimate familiarity, as well as those completely alien. Outfit your Spartans with all-new armour sets and unlock weapon skins from worlds beyond the Halo Universe. Highlights include:

To see the new trailer and find out about everything the new update brings, please visit the Xbox Wire

Authority power through to the regional finals

After Citadel Gaming and Team Immunity’s recent qualification, Qualifier Cup #3 hosted yet another opportunity for a team to pave their way to the ANZ Regional Finals in February. 24 teams signed up for this week’s qualifier including notable favourites, Exile 5 (formerly Team Sidewinder) and Team 4NOT. In similar fashion to the first Qualifier Cup, underdogs emerged at the top, with new-faces Authority advancing to the finals. Authority’s first appearance on stream came after they upset Exile5 in the Quarterfinals ensuring their Semifinals berth against Grudge Gaming. Making their strength known from the beginning, Authority dominated Plaza – Strongholds, 100-11. Two more convincing games followed, taking out Regret – Slayer 50-23 and Breakout on Gambol 5-1. In one of the shortest and most one-sided series’ of the cup, Authority were immediately off to face Nuke and Pave in the Grand Final.

Carrying on the momentum from the previous series, Authority took Capture the Flag on Coliseum by storm, with a perfect 3-0 scoreline. Nuke and Pave weren’t going down without a fight though, having a much closer game with Slayer on Empire. Both teams were desperately looking to create a gap on the scoreboard but it wasn’t until after the halfway mark that Authority were able to pull away, netting their second map win in the series. Pinned against the wall, Nuke and Pave had to secure a win in Strongholds on The Rig in order to keep their qualification hopes alive.

However, Authority’s in-your-face style and flawless rotations allowed them to cleanly claim victory in the third map, forging their place at the ANZ Regional Finals. Congratulations to Authority, who along with Citadel Gaming and Team Immunity, will be battling it out with the best ANZ Halo teams at the Regional Finals. Still looking for your chance to reach the Regional Finals? Qualifier #4 is only a week away and with two regional final spots up for grabs, it’s going to be the most important one yet! Join today!