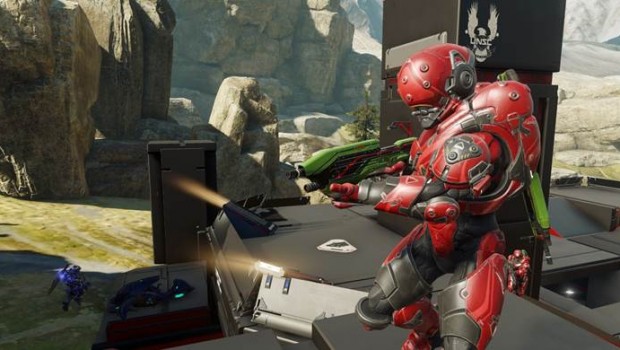 While the Big Team Battle playlist is now available to play, the new REQ content will take a bit of time to make their way into the Requisition System (REQ System), so expect to see them in 24 hours or less.

Visit Halo Waypoint for more details about all the new items that Battle of Shadow and Light includes, such as the Ultra Rare Shinobi armour, the Legendary Dying Star Light Rifle, the Shove-It assassination and much more.

343 Industries is hard at work creating more multiplayer content to keep players immersed in the action. Battle of Shadow and Light is just the first of many free updates being developed for Halo 5: Guardians; the highly-anticipated Forge mode drops next month, so stay tuned to Xbox Wire and Halo Waypoint for more information.

Compete against the very best around the world!

Earlier this year at gamescom, 343 Industries and Xbox announced the Halo World Championship (HaloWC), the biggest Halo esports competition in franchise history that is centred on the ultra-competitive Arena multiplayer mode of Halo 5: Guardians. We’re excited to unveil new details, including when and where the tournament will take place, and an update on the crowd-fund assisted prize-pool.

Xbox and 343 Industries originally announced a starting prize pool of $1 million for the Halo World Championship, with the potential to grow through crowd-funding via the all-new Requisition System (REQ System) of Halo 5: Guardians. Since launch, the prize pool has grown tremendously because of the Halo community, bringing the prize pool to $1.7 million and is growing daily!

Partnering with MLG, ESL and Gfinity, the Halo World Championship consists of online and in-person live events that will take place in U.S. and Canada, Europe along with the Middle East and Africa, Greater Asia, Latin America, and Australia and New Zealand. Key dates include:

Anyone who wants to learn more or register in the Halo World Championship should head over to the new Halo esports portal, Halo.gg. For esports fans, we’ll be livestreaming everything from ladders, qualifiers, regionals and finals – be sure to tune-in to the Halo and Xbox Twitch channels! The stakes have never been higher in the world of Halo esports – maybe it’s time to start practicing?

Check out the Xbox Wire for the full article from Mike Ybarra.

See you on Xbox Live!

Those of you running Windows 10 on your PC or tablet may have noticed some exciting updates in the Xbox app over the past few days. Just like on Xbox One, regular updates inspired by fan feedback have been a cornerstone for the Xbox app on Windows 10. Your feedback through the Xbox beta app has been extremely valuable, and we’ve been listening. Today, you’ll notice an upgraded social experience in the Xbox app as we’re unifying your Xbox Live and Facebook communities with the release of the Facebook friend finder. This feature joins the recently launched Game DVR voice recording feature and improvements to the Xbox Store accessible through the Xbox app.

Here’s an overview of the new experiences that you can now enjoy:

When your friends see your shared “I’m on Xbox” post on Facebook, they can click through and access the Facebook friend finder on Xbox.com, which also becomes available this week. In this way, web users on any platform and device can grow their Xbox Live network with Facebook friends as well.

Share your Windows Store game clips with your voiceover commentary with your friends on Xbox Live through the Xbox app, or share any of your game clips on the social network of your choice through your PC.

Record ANY game on your Windows 10 PC: The recent Windows 10 update also enables you to record game clips and capture screenshots for ALL games, including PC games where Game bar and Game DVR hotkeys didn’t work earlier.

Xbox Store section: The Store section in the Xbox app will now bring you into the Xbox Store – a launching point for browsing and searching for both Windows 10 and Xbox One games. The new interface allows you to see more content in the Store at a glance and brings you the latest crop of the most popular Windows 10 and Xbox One games, plus you can redeem Games with Gold games or get discounted games through Deals with Gold. Additional details on Xbox Store improvements that we tested recently in the Xbox beta app and have now officially released to the Xbox app can be found here.

We’re grateful to our dedicated Xbox beta app and Windows Insider Program participants for taking the time to share valuable feedback on the Xbox app’s new features before we implement them.

For more information be sure to visit the Xbox Wire.

The Planets of Star Wars Battlefront (…That Aren’t Hoth)

May the Force be with you!

If you’re a “Star Wars” fan, then you’re likely excited for Star Wars Battlefront, EA and DICE’s all-new multiplayer shooter based on the beloved film franchise. Most of the game’s early footage and beta content has been focused on Hoth – the snowy, trench-lined planet that played a pivotal role in “The Empire Strikes Back.” But there’s a lot more to Battlefront than just snow: Check out some of the other planets you can explore in the fight between the Rebels and the Empire.

The forest moon of Endor is a lush, foliage-heavy environment, made iconic in “Return of the Jedi.” And while you won’t be playing as the cuddly, fuzzy Ewoks, you can recreate epic fights between the Rebels and Empire in their home. The Ewok presence is felt in the treetop village, which offers snipers some pretty perfect vantage points. One of the coolest things about Endor is the lightning-fast speeder bikes: You can hop onto one and weave through the legs of an AT-ST walker as you shoot down enemy riders who are speeding through the forest. Many iconic locations from “Return of the Jedi” become the stages for your battles, like the shield generator that Han and Leia blew up in the film.

Sullust is a harsh, volcanic planet that “Star Wars” super-fans may be familiar with, but it’s likely new to many of you out there. For reference, the planet’s inhabitants – Sullustans, naturally – are those frog-faced aliens, most prominently seen as Lando’s co-pilot Nien Nunb in the end of “Return of the Jedi.” Home to an Imperial weapons factory, Sullust is the stage for Battlefront’s aerial X-Wing vs TIE Fighter dogfights. But the battle doesn’t stay in the air; players can drop down to the rocky, unforgiving surface to battle it out in different modes, inside and around the factory. Deadly Magma Troopers, Shadow Troopers, and heavy firepower make Sullust one ofBattlefront’s more explosive planets.

The home of Luke Skywalker, podracing, and Jabba the Hutt – not to mention one of the most iconic planets in the “Star Wars” universe – Tatooine has been featured in nearly every film of the saga. Heroes and Villains mode is a perfect opportunity to don the armour of Boba Fett, and hopefully not fall into a Sarlaac pit (although you can totally do that, and it’s awesome). Massive Jawa sandcrawlers, harsh open deserts, Tusken raider villages, and rocky canyons make up the set pieces for Tatooine.

Another planet that may be unfamiliar to some, Jakku is actually the desert planet seen in the trailers for the upcoming film “Star Wars: The Force Awakens.” Jakku marks the first downloadable content pack for Battlefront, available free for all players on December 8 – just a few short days before the film comes out. The Battle of Jakku offer glimpses into what happens between “Return of the Jedi” and “The Force Awakens.” Beyond that, it’s still pretty mysterious… but keep your eyes on Xbox Wire for more on Jakku in the coming weeks.

Star Wars Battlefront is out now on Xbox One and Windows PC. Step into the shoes of your favourite heroes and villains – or join the Rebels or Empire to battle it out in game modes from eight to 40 players.

Now that hoops season is well underway it’s the perfect time to play some virtual ball.

We’re excited to announce that all Xbox Live Gold members can enjoy the critically acclaimed NBA 2K16 for free this entire upcoming weekend with Xbox Live Gold’s Free Play Days. Running from 4:00 AM AEDT Saturday, November 20 through 18:59 PM AEDT Monday, November 23, this allows Gold members in Xbox One markets to experience the excitement, drama and skills on display in NBA 2K16, including the new 2K Pro-Am game mode with fully customizable tournaments, in its entirety and for free. The game will also be on sale all week, so if you decide to purchase the game, you will be able to start again right where you left off.

NBA 2K16 does more than let you experience the modern NBA. It also lets you step onto the court with 12 new legendary teams, including some of the most epic squads from the past 15 years, including the ’00-’01 Lakers or the ’07-’08 Boston Celtics.

Demonstrating NBA 2K series’ commitment to authenticity and innovation, 2K invited legendary filmmaker and master storyteller Spike Lee to direct, write and co-produce the NBA 2K16 MyCAREER experience. The result is NBA 2K16’s most intense first-person narrative to date. Additionally, you will have the opportunity to manage your off days and earn bonus content through connections, endorsements and a live practice environment.

Take your MyPLAYER online in MyPARK, a massive multi-player playground where you can show off your game to the world in new live-streamed competitive events. Break ankles, drop dimes and create a street legacy at one of three newly enhanced parks.

During the week, you’ll have the option to purchase the game online from the Xbox Store at a discount and continue playing. You will also get to keep your Gamerscore and achievements earned while playing, so draft your Xbox Live friends and practice that jump shot.

You can download NBA 2K16 by clicking on the Gold Member area on the home dashboard or downloading directly from the Xbox store, for more information please visit the Xbox Wire.

For more information, be sure to visit the Xbox Wire.