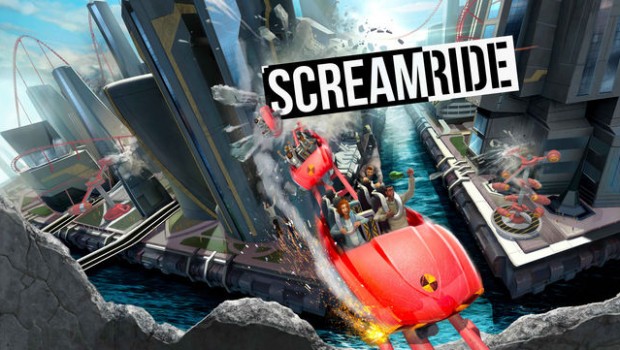 Create, Ride and Destroy in the ScreamRide Demo

The perfect way to practice and start your way to becoming a five-star-earning ScreamRider, Engineer and Demolition Expert

ScreamRide crashes onto Xbox in two weeks and if the launch trailer has you curious to see just what happens when you hurl pods full of explosives at buildings or build terrifying coasters, you can now start creating and destroying on the ScreamRide demo, which launched on Xbox Live earlier this week.

Available on both Xbox One and Xbox 360, you can try out each of the three career modes in the free demo (the full game features over 50 levels in the campaign plus a robust level creation editor). Want to test your awesome twitch action gameplay skills by steering a coaster car directly through crazy mazes? Then strap yourself in the cockpit as a ScreamRider and ride a coaster through the labyrinth of twists and turns. For a change of pace, you can play as the engineer and strategically plan how to build the best coasters with the provided tools. Finally, once you’ve mastered riding and creating, tear it all down by playing as the demolition expert, where you skilfully fling pods for maximum screams and destruction. Screamride is currently available for pre-order in stores, digital pre-order and pre-download. As you prepare for launch beginning March 5th, use the demo to practice and start your way to becoming a five-star-earning ScreamRider, Engineer and Demolition Expert, earning as many screams as you can!

For more information on Screamride and to view the trailer please visit the Xbox Wire.

Earlier this month, Xbox added a host of new features and improvements on Xbox One. As of today, members of the Xbox One preview program will get to check out even more new features – some of which are planned for the March system update.

To check out more on the list of features in the March system update preview please visit the Xbox Wire.

Automatic updates to the February version of Xbox apps

The Xbox app on Windows 10 has an updated version now available. The goal is to continue to provide monthly updates of the Xbox app and to collect feedback and ideas from the Xbox community. There are a few small updates this month with more to come going forward.

You will automatically get updated to the February version of the Xbox app, when it becomes available in the Store (Beta). Once you receive the update, your version number should be 2.2.1502.02017 or higher. You can verify the version number of the Xbox app under Settings. The following features have been updated this month:

For all the latest Xbox update news, please visit the Xbox Wire.

6 Survival Tips to Succeed in Evolve

Key bits of advice to get yourself up to speed

The four-on-one multiplayer of Evolve looks deceptively simple. Jump into the shoes of a Hunter, and it’ll feel like a first-person shooter. Even playing as the Monster can initially feel like an action-focused roaming brawler. But this is a game with a great deal more depth than it appears at first glance. No, don’t shy away, we’re here to help: follow these key bits of advice to get yourself up to speed. Know Your Role

In Evolve, every character is unique. And every Hunter is vital. Since you’re never entirely sure which character you’re going to spawn as, you need to get familiar with them all. But, more importantly, you need to operate within that character’s given role. For example, if your Medic spends more time trying to damage the Monster than healing your team, you’re going to have a bad time. Learn the roles, and play the role you’re given. You’ll have plenty of opportunities to play other roles in the future. It’s Dangerous to Go Alone

Because each Hunter class supports every other, it’s absolutely crucial to stick together as much as possible. The last thing you want is to have your Assault Hunter halfway across the map when you’ve trapped the Monster. And being low on health without a Medic around is nothing short of infuriating. So keep tabs on your teammates… and at the very, very least, stay in constant communication with each other. For Monsters, a Little Stealth Goes a Long Way

Let’s review the basics of Evolve: One player controls a Monster. Four players do everything in their power to destroy the Monster. As powerful as the Monster can be, it’s hard to escape the fact that it’s four against one. One way to gain an edge as the Monster is to be as stealthy as possible. At the start of the match, of course, you’ll want to run like hell. But as soon as you’ve got some distance between you and the Hunters, take it slow and careful. The quieter you are, the harder it’ll be for them to find you. And for the love of all that is holy, avoid the groups of roosting birds. They’ll put the Hunters on your trail immediately. Don’t Get Tunnel Vision

No matter your role, it’s easy to get too focused on the ultimate goal of the match, whether it be taking down a Monster or simply surviving as one. But remember that some side-tracks are worth it. Most especially, hunting albino creatures can result in seriously beneficial buffs for you or your team. You can harvest bonuses that slash your special-ability cool-down times, boost your armour, or even expand your clip size. Just don’t get too distracted, or you might find your enemy creeping up behind you. Mix it Up

When you look at the progression path for both Hunters and Monsters, you’ll notice that each item or ability has its own individual challenge. For example, the Medic needs to heal a certain amount of teammate damage, tranquilise the Monster a certain number of times, and place a certain number of targets on the Monster with the sniper rifle. Each class has similar challenges, and so does the Monster. Only after completing all of these objectives can you level up and unlock a new character. It can feel like a bit of a grind, but it serves two important purposes: first, it forces you to get comfortable with all of your role’s abilities; and second, it gets you access to upgraded characters, who are dramatically better than the base model. …But Not All at Once

Here’s the trouble: if you try to focus on all these objectives in a single game, you’ll find yourself overwhelmed. Monsters really need to specialise; you only get a handful of upgrade points when you evolve to Tier 2 and Tier 3, and trying to spread those points to all your abilities is going to leave you underpowered and vulnerable. So whether you’re playing as Monster or Hunter, pick just one or two abilities to focus on each round. The most important thing to remember about Evolve is that it’s a much more complex and strategic game than it appears. Pay attention to your roles and your goals, though, and you’ll survive. Well, some of the time.

You can test your monster-hunting abilities immediately; Evolve is available right now on Xbox One.

For more on survival tips and all the latest Xbox news please visit the Xbox Wire.