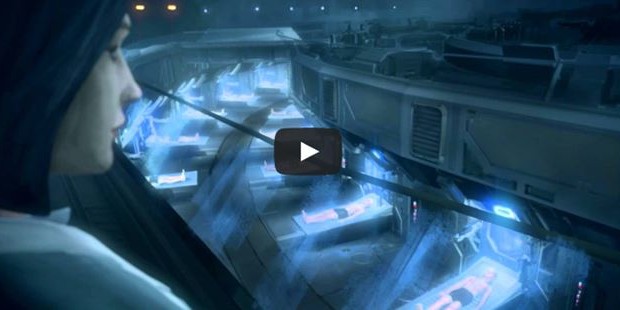 What goes into the creation of one of the year’s biggest and most highly-anticipated video games?

Following the world premiere of Halo 5: Guardians gameplay at E3 2015, developer 343 Industries today elaborated on the story of the hotly-anticipated Xbox One exclusive. During a jam-packed panel at San Diego Comic-Con, 343 Industries expanded on their bold and ambitious vision for Halo 5: Guardians.  They also detailed how the game’s epic narrative is being enriched by interconnected stories told through other parts of the franchise, including the Halo: The Fall of Reach animated series, and a second season of the critically-acclaimed Hunt the Truth audio series.

343 Industries takes you behind the scenes in a new video documentary (ViDoc) that provides an in-depth look at the development of Halo 5: Guardians and the team’s creative vision. Built from the ground up to take advantage of the Xbox One and Xbox Live, Halo 5: Guardians features the franchise’s most ambitious campaign and multiplayer experiences yet, all running at 60 frames per second.

The entire ViDoc is available on the Halo Channel, which for the first time can now be downloaded on iOS and Android devices. The Halo Channel is also available on Xbox One, Windows 8.1 PCs and tablets, and a version for Windows Phone is currently in development and will be available at the launch of Windows 10 Mobile.

Halo: The Fall of Reach Animated Series Explores the Origins of the Master Chief and Blue Team

343 Industries revealed the teaser trailer for Halo: The Fall of Reach, an animated adaptation of the beloved Eric Nylund novel of the same name. Told in three connected acts, the high-quality animated production is included with the Digital Deluxe Edition, Limited Edition and Limited Collector’s Edition of Halo 5: Guardians and can be viewed via the Halo Channel with the launch of the game on Oct. 27.

The animation is produced and directed by SEQUENCE, the award-winning Vancouver-based animation studio responsible for the “Terminals” featured in Halo 4 and Halo 2: Anniversary, and this marks their most ambitious and high-fidelity Halo animation yet.

Halo: The Fall of Reach tells the dramatic tale of the origin and intrigue behind the SPARTAN program that propelled characters like the Master Chief and Dr. Catherine Halsey into the pantheon of Halo lore. The story reveals the events that brought Master Chief and Blue Team together, including their Spartan training and their daring mission to strike back at the Covenant during the first days of the deadly alien invasion.

Season two of Halo’s popular Hunt the Truth audio series will launch this Spring. When Hunt the Truth launched in March 2015, it took the Halo community by storm, generating more than 5.5 million podcast listens across its 13 episodes while garnering massive critical-acclaim from fans and media worldwide.

For those that haven’t tuned in yet, season one of Hunt the Truth was hosted by Benjamin Giraud (Keegan-Michael Key) and focused on his investigation into the Master Chief, humanity’s greatest and most mysterious hero. As inconsistencies in the story emerged, Ben was faced with a choice to toe the government line or cut rank and break the conspiracy wide open.

For additional information about Halo 5: Guardians, be sure to visit the Xbox Wire.

“Raid on Apex 7” is the largest Warzone level to date and a spiritual successor to the Halo: Combat Evolved , “The Silent Cartographer”. Clearing out the initial Covenant threats and controlling the Forerunner Spire in the center of the island is paramount to a team’s success and provides a central base of operations. If your team loses the Spire, don’t despair; players can use a system of caves or take to the beach to flank the base. Beware of the Covenant though, for they will not let you take this island so easily. They will counterattack and fight to retake their territory. Continue the push for control of the island and take out the opposition’s core… before you awaken something much worse.

To see a video of how it all came together, or for any Halo 5: Guardians assets, please visit the Xbox Wire.

Do yourself a favour and download Forza Hub before it’s too late!

Forza fans – if you love Porsche, we’ve got fantastic news for you: starting today, we are bringing two additional Porsche models to “Forza Horizon 2,” in celebration of the just-released “Forza Horizon 2” Porsche Bonus Pack.

The free Porsche models are being offered exclusively through the Forza Hub app on Xbox One, which can be downloaded for free. Once you’ve got it installed and loaded up on your Xbox, look for the “Two Free Porsches!” story on the front page of Forza Hub. Simply click the button in the story to head to the Xbox Store where you can grab your pair of free Porsches and get a taste for what makes Porsche such an amazing addition to “Forza Horizon 2.”

Looking for Xbox Live achievements? The two models in the Porsche Bonus Pack will also allow you to unlock three achievements from the Porsche Expansion, including the “Porsche Owners Club,” “Horse Power” and “This is My Porsche.”

The Porsche Bonus Pack will only be available until Friday, July 24 and include 2012 Porsche 911 GT2 RS and 2012 Porsche Cayenne Turbo.

For a closer look at the two Porsche models in the pack, and for media assets, please visit the Xbox Wire.

Get Ready to Race, Collect and Customize the New Additions to the Forza Motorsport 6 Garage

Following our weekly Forza Motorsport 6 car announcements, we are revealing more of the cars that will be available to race, collect and customize when the game launches on Sept. 15. If you missed our huge 100+ car announcement at E3 or last week’s list of 39 cars, you can check out the full list of cars announced so far at ForzaMotorsport.net.

This week, we throw the spotlight on a couple of vintage race cars that you’ve never seen in a Forza game before. The McLaren M8B Can-Am car represented the best of the best in an incredible era of racing that was dominated by the cars of Bruce McLaren. The M2B Formula One car, which got McLaren started in Formula One, features one of the most raucous sounds coming from the classic open-wheel F1 cars of the era.

Let’s take a closer look at these legendary rides:

The Can-Am series expanded in the late sixties, intending to open up the podium to more competition. However, Bruce McLaren in the # 4 and Denny Hulme in the #5 McLaren M8B had other plans, winning all eleven Can-Am races in 1969. The series became known as “The Bruce and Denny Show” that year, with the McLaren duo winning every race over legendary drivers like Chris Amon, Mario Andretti and Jo Siffert. The #4 M8B was driven by Bruce McLaren himself, grounded by a high-mounted airfoil and powered by a bulletproof seven-liter V8. Bruce McLaren earned six of the eleven wins that year and the M8B’s finished both first and second in eight of the races. The now-legendary M8B’s became known as the “Orange Elephants,” a fitting name for their dayglow paint and hard-charging nature. The M8B made a mark that racing history will never forget – and now you can experience the pavement-pounding performance of the Orange Elephant for yourself.

In the hard and unforgiving world of Formula One, no quarter is given and none taken without monumental will, bolstered by a little luck. The McLaren M2B represents the legendary racer’s first efforts in the highest level of racing. The Robin Herd-designed “Mallite” monocoque car debuted at Monaco in 1966 with an Indy Ford four-cam V8 (reduced from 4.2 to 3.0 liters) in the back. With its Hillborn fuel injection intake trumpets sticking out like gun turrets and “snake-pit” exhausts trailing out the rear, it had the look and sound of a winner. However, after nine laps, McLaren realized the motor was ill-suited for F1 racing, despite its ability to rattle the windows of Monte Carlo’s residents. Later versions of the car were powered by a Serenissima V8 designed by Count Volpi, taking McLaren to race finishes that earned the team their first F1 Constructors’ points.

Take a look at the rest of the cars we are announcing this week at the Xbox Wire.