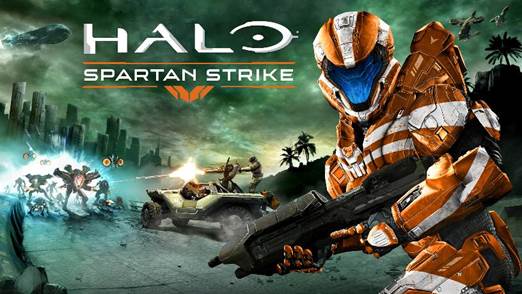 The newest mobile top-down shooter from the “Halo” universe has officially arrived!

“Halo: Spartan Strike” tells a compelling new story in the “Halo” universe set during the events of “Halo 2” on New Mombasa in 2552. As a Spartan supersoldier in a classified ONI simulation, delve into 30 challenging missions while leading UNSC troops through cities and jungles with an all new arsenal of weapons, abilities and vehicles.

No matter where you are, “Halo: Spartan Strike” provides fans a piece of the Halo universe with improved touch controls and updated graphics for an enhanced pick-up-and-play experience.

In addition to the campaign, players on Windows 8 devices can compare performance against friends in weekly challenges and attempt to take the top spot on the leaderboard. Earn Achievements that unlock an exclusive emblem, nameplate and avatar in “Halo: The Master Chief Collection” on Xbox One2.

Also available on iPad, iPhone, and Steam is the “Halo: Spartan Bundle.” The bundle includes both “Halo: Spartan Assault” – the original Halo top-down shooter that plays through the historic first missions of the Spartan Ops program as Commander Palmer – and “Halo: Spartan Strike” for AU$9.99 ERP1.

Be sure to check Halo Waypoint for updated “Halo” information and keep tuning into Xbox Wire for the latest on “Halo: Spartan Strike,” Xbox and more.

Split-screen multiplayer was a huge part of our gaming experiences growing up, especially first-person shooters. And the singular element that tied together every split-screen shooter game was that moment when you totally called out your buddy for cheating and looking at your corner of screen. We all did it; it was too hard to resist sneaking a peek. And this is why Screencheat is such a brilliant game: It encourages you to look at your opponents’ screens, because that’s the only way to win.

Screencheat comes to us from developer Samurai Punk in Australia. The premise is simple enough: It’s a first-person shooter where every character is invisible. So in order to score, you have to look at your opponents’ screens and deduce where they are, based on the brightly coloured and iconic areas of the level. Aesthetically, Screencheat is bright, humorous, and light-hearted. Candelabras and hobby horses go up against grenade launchers and pulse cannons in a zany mix of silly, over-the-top weaponry.

The level we played was a museum that felt like a technicolour layer cake, and in a place like this, the different coloured zones are the biggest hint of where your opponents are. We ran through the multi-tiered environment, rapidly glancing at the other three screens so we could fire blindly. You’d be surprised how quickly you adapt, and many of the weapons in the game have a fairly generous range – so even blind-firing manages to score a few kills.

There are numerous modes in Screencheat, including a traditional deathmatch, as well as a mode where each player only gets one shot… and can’t fire again until everyone has fired their weapon. While it’s certainly more of a party game than a tournament-level shooter, Screencheat does test your skills, and it creates a great competitive experience.

More importantly, it evokes that ultimate party game experience of making you want to punch your friend in the shoulder every time they score on you. Screencheat feels like a nostalgic throwback while simultaneously twisting well-known game mechanics on their heads. It’s a refreshing mix of old and new, and it’s a great choice for spicing up game nights with friends. Screencheat hits Xbox One later this year via ID@Xbox.

For the full trailer for this great new ID@Xbox title and other Xbox news, please visit the Xbox Wire.

The second downloadable content pack for Call of Duty: Advanced Warfare – titled Ascendance – hit Xbox One recently, and added a slew of new content for your Exo soldiers.

Master New Maps Ascendance features four new maps for multiplayer, ranging from small to large – and like all the Advanced Warfare maps, they feature their own unique gameplay twists.

Ascendance continues the story of Exo Zombies after the first episode from the previous Call of Duty: Advanced Warfare DLC pack, Havoc. The four survivors have made it to the edge of the Atlas Corporation’s facility, fighting mutants the whole way. But now, they face newer, deadlier enemies. Featured in this episode: the return of Burgertown, the preferred fast food chain of Call of Duty zombies everywhere.

The DLC packs for Call of Duty: Advanced Warfare each feature a new weapon. For Ascendance, it’s the OHM Directed Energy Hybrid Weapon. What the heck does that mean? Well it’s an energy-based weapon that gives you two gun styles at once: There’s a SMG mode for crowd control and suppression fire, and a shotgun mode for those glorious finishing shots. It’s seriously one of the coolest weapons in this game… or any other Call of Duty game.

The Ascendance DLC pack is available now on Xbox One and Xbox 360, to find out more please visit the Xbox Wire.