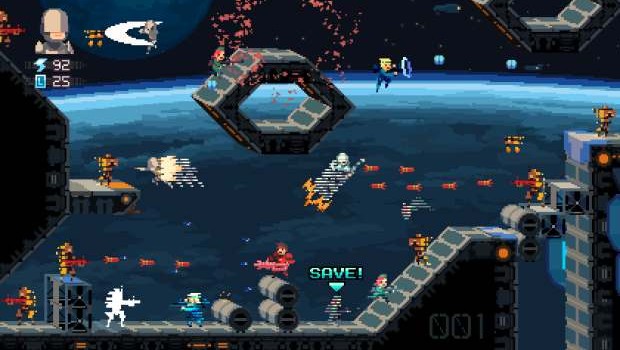 Established in 2003 by a group of recent graduates with varied backgrounds like film and chemical engineering, independent studio Capybara Games—Capy, for short—sits near the centre of Toronto’s burgeoning game development scene. Capy got its start in various work-for-hire roles, eventually branching out into developing their own titles with puzzler “Critter Crunch,” the puzzle-strategy game “Might & Magic: Clash of Heroes,” and its biggest hit to date, “Superbrothers: Sword & Sworcery EP.”

Now, the studio is releasing its first true action title, “Super Time Force,” which launches for Xbox One and Xbox 360 on May 14. “We’ve never done anything this… ‘splodey before, but in some ways, it feels like the most ‘Capy’ game to me,” says Dan Vader, “Super Time Force’s” co-designer, level designer, and writer. “It certainly bears our hallmarks: familiar mechanics taken in a far-out direction, beautifully stylised art, jokes, and barf.”

The game is a classic-styled sidescrolling shooter, in which players have 30 lives to run and blast their way through levels of sheer bullet hell. It’s been called “a ‘Contra’ game where you can go back in time.” Upon every death, the player enters TIME OUT mode, where they can rewind back through their play through and choose a moment and a new character to hop back into the action. Players can also TIME OUT whenever they choose by hitting a button. It’s a trip, to say the least.

“I think most people have an idea of how you play ‘Super Time Force,’ and mostly, they’re right… but the time-travel mechanic also reveals little nuances, the further in you get,” says Vader. “It’s the sort of stuff that… if we even try to explain it, it will just leave you going ‘huh?’ — but when you discover it on your own, it leads to some great ‘aha!’ moments.”

“Super Time Force” began as a side project, which grew out of a game jam and which the studio limited to Friday development sessions for some time. It eventually proved itself worthy of more intensive pursuit, however, once the team realised how solid the concept was.

“The hardest part of the game was moving from an amazingly fun prototype to a game we felt was complete,” says Vader. “We went from a 15-minute demo to a game that’s easily over five hours long, and potentially way more. We went from a couple short levels to 27 levels. We went from three characters to 16. We went from a ‘kinda crazy’ idea to a ‘totally bonkers’ video game.”

With its fantastic pixel art, “Super Time Force” stands out in a rather crowded field, as even a cursory look at the lovingly cobbled-together characters can attest. “The style really originated from just trusting our incredible art team,” says Vader. Twin brothers Mike and Vic Nguyen were the co-creators of the game jam demo that became the launch pad for the game itself, and defined the look very early on. Kelly Smith later joined the team, and three of them fleshed out the world together.

“I think the key to the way they approach things is that they use pixel art without any kind of orthodoxy or nostalgia,” says Vader. “They aren’t trying to replicate how games used to look or anything—they’re just really crazy talented artists and they are filtering their perspectives and humor through pixel art.”

This style is reinforced by the music of Jason “6955” DeGroot. “Jason’s a very good friend of the studio, and we’ve always really dug his music,” says Vader. So when “Super Time Force” suddenly went from studio pet project to full-fledged game, DeGroot was their first and only choice to handle the music. “We could practically hear his tunes in our heads when we played the demo—it was just the ideal stylistic marriage,” he says. “Much like the game, it feels at once familiar and yet goes to some really unexpected places.” Vader points out that DeGroot’s music, layered on top of the game’s “totally nutso” audio design, really puts an exclamation mark on the style they were shooting for.

So, is time really on your side? Find out May 14 on Xbox One and Xbox 360, when you’ll be able to download “Super Time Force,” the latest game from the ID@Xbox self-publishing program for Xbox One.