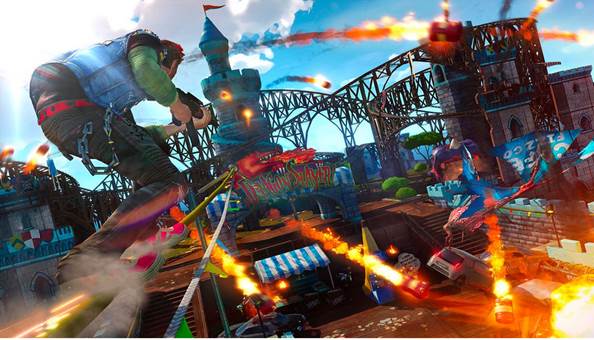 The Awesomepocalypse is Nigh! Sunset Overdrive Goes Gold and is Available for Pre-Order and Pre-Download Starting Today

A vibrant and insane end of days starting Oct. 30

Set your countdown clocks and brace yourself for the Awesomepocalypse – Sunset Overdrive has officially gone gold! Insomniac Games and Microsoft Studios are excited to usher in a vibrant and insane end of days starting Oct. 30.

Acordes de la Muerte – Give me a “K!” Give me an “I!” Give me a “Guitar-with-melting-candles-on-it melee weapon that can bash in the skulls of my vilified enemies!” What’s that spell? Errr…

Fans can also choose to pre-order the Day One Digital Deluxe Edition ($116.70 AUD RRP) of Sunset Overdrive, which includes the game’s Season Pass. Also available separately for $26.95, the Season Pass guarantees lots of OD wrecking fun with three additional post-launch Game Add-ons and some great added bonuses you can use at launch, including:

For more information on all that is Sunset Overdrive and everything Xbox, please visit the Xbox Wire.

What will you create?

After a six-month beta, Project Spark has now launched with a host of new content and a retail disc offering. More than 1 million Project Spark creators have already logged 4 million hours making 70,000 game levels that fans can dive into on day one. New content comes online every day so there’s is always fresh content to check out regardless of your genre preference or skill level. Project Spark is an experience like no other that aims to democratize game making by giving everyone easy-to-use tools to create, play and share their own creations with others. You can instantly play tens of thousands of user-made games, remix a pre-made game, or hop right in and make your own game with tools including 3D sculpting and a visual programming language similar to what the pros use, made accessible to all. Project Spark is free-to-play and is available for download now via the Xbox One and Windows 8.1 stores. Add-on content can be unlocked by using in-game credits earned during play, or by purchasing tokens to buy add-ons immediately. Fans will see a host of new content available on launch day including sci-fi skin, adventure mode, champion features, creation enhancements, and multiplayer mode to inspire all new gameplay. Those brand new to Project Spark might want to check out the Starter Pack retail disc that includes over $85 worth of downloadable content for $49.95. The package includes the Project Spark base game download, “Champions Quest: Void Storm” adventure,” First Contact” sci-fi theme pack, Sir Haakon the Knight playable champion, “Arctic Glaciers” winter landscape, “Massive World Builders Pack” expansion, “Yeti’s Rage” content pack, and a one month “Spark Premium” membership. Project Spark isn’t “finished” at launch — it’s an ever-evolving service shaped by the community. Several features and changes were applied during beta due to direct responses from fans, and post-release the community will be even more involved in shaping the future of Project Spark. We can’t wait to hear what you think, and play what you create.

For more information and everything you need to know about Project Spark, please visit the Xbox Wire.

Featuring six amazing cars to race, customize, and collect in the game

For more information and the full list of cars being announced, please visit the Xbox Wire.

Warlock Revealed as the Final Halo 2 Map Being Re-Imagined for Halo: The Master Chief Collection

Now, the fan favourite arena will find a home in Halo: The Master Chief Collection

First it was Wizard in Halo: Combat Evolved. Then it was remade in Halo 2 as Warlock, and again as Magus in Halo: Reach. Now, the fan favourite arena will find a home in Halo: The Master Chief Collection as Warlord – the last of the six classic Halo 2: Anniversary multiplayer maps being re-imagined for the game, joining Ascension, Coagulation, Zanzibar, Sanctuary and Lockout. Set amid the ruins of an ancient Forerunner dungeon on Delta Halo, Warlock was renowned for hosting close-quarters firefights across its stony ramps and platforms, as well as teleporters that allowed players to instantly warp back and forth across the map to escape gunfights or launch deadly ambushes. “Warlock was my pet project due to fond memories of internal Bungie playtests where we had intense, epic shotgun CTF matches,” said Max Hoberman, president of Certain Affinity and the multiplayer lead designer on the original Halo 2. “There’s really nothing else quite like this map in the Halo sandbox – a small arena 4-way symmetric base map – and we felt that it would be a great complement to the other re-imagined maps.” Of course, Halo 2: Anniversary’s Warlord also includes a few new updates.

Season Two set to hit Xbox One on October 15

o Eight fighters, starting with TJ Combo and Maya, and adding a new fighter each month

o Eight fighters, starting with TJ Combo and Maya, and adding a new fighter each month

o Players can also purchase Season 2 fighters individually as they are made available for AUD$6.65

For fans who want to get TJ Combo early, they can purchase the Killer Instinct: Season 2 – Ultra Edition between September 23rd and October 14th. This offer not only includes instantly adding TJ Combo to the roster, but also gives fans early access to Killer Instinct 2 Classic.

For the latest Xbox news and information check out the Xbox Wire.

Today, one of the most anticipated titles of the year is available for pre-order and pre-download on Xbox One. You can be among the first to use cutting-edge exoskeleton abilities and an advanced arsenal of weapons by pre-ordering and pre-downloading Call of Duty: Advanced Warfare and powering up your exoskeleton early, starting on Nov. 3. To celebrate the launch of the game, the following Call of Duty: Advanced Warfare game bundles are available for pre-order globally, starting today, through the Xbox Store on the console or online at store.xbox.com:

Call of Duty: Advanced Warfare is set to deliver a new era of Call of Duty and brings a new vision to the blockbuster franchise. Developed by Sledgehammer Games and published by Activision Publishing Inc., Call of Duty: Advanced Warfare boasts true next generation visuals and jolts players forward in a ground breaking experience that’s ripped-from-the-headline-of-tomorrow, envisioning a future where both technology and tactics have evolved to create a new era of combat for the franchise. Based on plausible tech and extensive research, the narrative begins in the year 2054. The Atlas Corporation, a private military corporation (PMC), has emerged with the power to rescue humanity after a global attack on its military and infrastructure. Empowering players with an advanced arsenal with new weaponry, vehicles and high-tech gear, players can join the ranks of a highly-trained, specialized unit committed to restoring order.

For information on how to pre-order and pre-download check out the Xbox Wire.