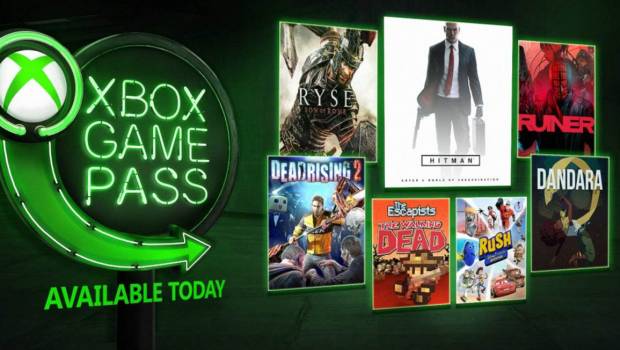 Game Pass members, get ready for action as a variety of new titles for gamers of all ages are on their way. In addition to the more than 100 great games already included in your membership, starting today journey to the ancient Roman Empire with Ryse: Son of Rome; stop a cyberpunk conspiracy in Ruiner; fight two distinct flavours of zombie from the gory hordes in Dead Rising 2 to the 8-bit walkers in The Escapists: The Walking Dead; take an assassination contract in Hitman: Season 1, or leap into metroidvania-style action in Dandara. Finally, enjoy a game with the whole family in Kinect Rush: A Disney Pixar Adventure, the remastered Xbox 360 Kinect-supported classic.

Welcome to the World of Assassination. You are Agent 47, the world’s best assassin.

As an agent of the International Contract Agency (ICA), you are tasked with taking out hard-to-reach, high-profile targets in exotic locations all around the world. You’ll need to use your wits and creativity to find ways in eliminating your targets in densely detailed and intricate sandbox levels with complete freedom of approach. Where to go, when to strike, what to use, and how to kill is all up to you.

It‘s the brutal world of 2091. Ruiner immerses you in a cyberpunk dystopia, where you take on the role of a wired sociopath out to uncover the truth about the corrupt system and to retrieve his kidnapped brother. This brutal action shooter immerses you in Rengkok City, from its shady back-alleys to its towering corporate titans. Get ready to experience a game carved from the mold of the best cyberpunk anime.

Ave! Join the legions of ancient Rome as Marius Titus, a centurion on the rise. Sword-and-sandals meets action combat as you battle with the unique flow system, allowing you to seamlessly weave your battle between enemies. Prepare to immerse yourself in this alternate history, where the battles you fight will determine the fate of an empire.

The sequel to the smash hit features Chuck Greene, a motorcycle stuntman truly racing against time as he fights through hordes of zombies to keep his daughter alive. With loads of customised and constructible weapons, 2-player co-op, 4-player gladiator battles, and all DLC costumes included, players can rip through the undead horde in gory-ous 1080p at 60fps.

Dandara is an exciting evolution to the metroidvania platformer genre. Take control of the mystical heroine Dandara as she leaps from the floor to walls to the ceiling, unhindered by gravity. Discover allies and mysteries hidden throughout as she fights to free the land of Salt from the oppression of the Eldarian Army.

The Escapists: The Walking Dead

8-bit pixels meet biting zombies in The Escapists: The Walking Dead. The pixel art style familiar to fans of The Escapists brings the world of “The Walking Dead” to glorious un-life as you take on the role of Rick Grimes as he fights an endless horde of walkers let loose upon the world. Lead characters to safety while avoiding (and destroying) the undead.

This Xbox 360 title, newly remastered for the Xbox One, now features controller support as well as support for the Kinect Sensor. Create your avatar and jump between the worlds of Pixar films like “Up,” “Cars,” “Ratatouille,” “Toy Story,” and “The Incredibles.” The remastered version features an all-new level based on “Finding Dory.” Unlock secret areas, new characters, and more as you master more than 15 fully-voice-acted levels!

With over 100 great games available for one low monthly price, including highly-anticipated new Xbox One exclusives the day they’re released, plus more games added all the time, Xbox Game Pass gives you the ultimate freedom to play. If you haven’t tried Xbox Game Pass yet, you can start your 14-day free trial now.