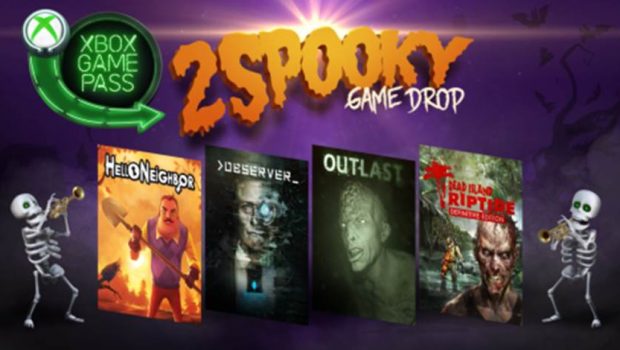 Halloween is one of our favourite holidays here at Xbox Game Pass, it’s all about having some gourd honest skele-fun. This year we’re creepin’ it real and as part of our 2Spooky for Halloween event, we’re adding a bonus four games to your Xbox Game Pass catalogue today. Getting this Halloween party startled will involve the apocalypse of Dead Island: Riptide DE, surviving the horror of Outlast, experiencing a digital plague in >observer_, and uncovering the horrific secrets in Hello Neighbor. If these games are your (blood) type, you’re all set for a Spooktacular (you can tell we’re having too much fun here) Halloween on Xbox Game Pass.

And don’t forget, you can lift your spirits with over 100 more great games on Xbox Game Pass – you’ll find them on the Game Pass tab on your home console. Keep it tuned to @XboxGamePass on Twitter and Instagram for upcoming news and titles joining Xbox Game Pass, too.

The rules of survival within the walls of the remote Mount Massive asylum are very simple: run, hide, or die. The nearly forgotten home for the criminally insane was recently re-opened by the transnational Murkoff Corporation whose activities have been hidden away under a strict code of secrecy. Miles Upshur, an independent journalist, decides to investigate into an anonymous tip, but quickly finds himself swallowed up by the deranged horrors that have taken over the asylum. Outlast is a first-person survival horror game that takes you on a journey through a nightmare that you may never wake from.

Featuring an advanced AI that learns from your every move, Hello Neighbor puts you in the shoes of a curious resident who endeavours to figure out what horrible secrets their neighbour is hiding in the basement. With sandbox-style gameplay with plenty of environmental interaction and physics and a constantly evolving experience where the Neighbor’s AI counters your moves (and learns from what you do), this stealth horror game is sure to keep you on your toes.

At its heart, >observer_ is a game about technology, culture, and the horror that can result from the convergence of humanity and tech. What would you do if your fears were hacked? Taking place in a cyberpunk version of Poland in 2084 where robotics, augmentations, and screens litter the landscape, >observer_ puts players in the shoes of a detective who must invade his suspect’s minds to gather evidence, reliving their fears in order to discover the truth.

With over 100 great games for one low monthly price, including highly anticipated new Xbox One exclusives the day they’re released, plus more games added all the time, Xbox Game Pass gives you the ultimate freedom to play.