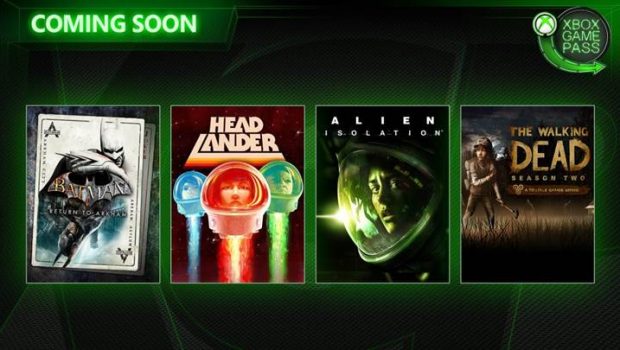 It’s true, constantly bringing more games to you is kind of our schtick at Xbox Game Pass, so let’s talk about the journey these latest additions took to get from us to you! We started with the customary good luck ceremony, during which we wrote heartfelt haikus in tribute to each game, and the social media team sang their rehearsal solos for the Xbox Game Pass: The Musical. Then we packaged up Disney Epic Mickey 2: The Power of Two, The Walking Dead: Season 2, Headlander, Alien: Isolation, and Batman: Return to Arkham using laser-guided robots and emotional support tortoises to transport them to our super-secret Xbox Game Pass bunker. The robots and tortoises looked knowingly at Crackdown 3, with that “We’re following your lead” sort of look that only robots and tortoises can give. You know the one.

From there, the power of the internet and memes and cat pictures brought this announcement to you, my dear Xbox Game Pass friend! They’ve come a long way, so let’s gaze lovingly at our latest games:

Batman: Arkham Asylum and Batman: Arkham City, the first two games in the iconic Batman Arkham series, are coming to Xbox Game Pass in this comprehensive compilation that includes the definitive edition of each game, complete with all post-launch downloadable content. In Batman: Arkham Asylum, journey into the depths of Gotham City’s high security psychiatric hospital and battle supervillain inmates who have taken over the Asylum. Then go soaring into Arkham City, a super-prison built to contain Gotham’s worst criminals in Batman: Arkham City, one of the most critically-acclaimed games of all time.

Have you ever looked at the glass head in a jar on those retro-futuristic TV shows and thought, “What would that be like?” Look no further my friends. In this 2.5D metroidvania-style game, you are the last known human (well, human head) in the universe. You’re suffering from amnesia like anyone might do if their head was stuck in a jar I suppose, but you do have lasers and beams to attack and yoink the noggins off of robots and put your own there to take over the body. Explore rooms, solve puzzles, defeat hostile machines, and discover what has happened since humanity uploaded their minds into the cloud…

Unleash the power of the brush in this co-op adventure with Mickey Mouse and Oswald in Disney’s Epic Mickey 2: The Power of Two! With paint brush and remote control, Mickey and Oswald visit the alternate magical world filled with music, forgotten Disney characters, and attractions. Forever change the Wasteland in this heroic adventure where your “PlayStyle Matters”, and you can conduct your own unique soundtrack to this magical world, and truly save the Wasteland.

A horror-themed adventure game where your every choice could determine the fate of young survivor Clementine. Following the harrowing events of The Walking Dead: Season 1 (available now with Xbox Game Pass), Clementine is now alone in a world ruled by the undead. Experience the unique perspective of playing as a child in the apocalypse, where you’ll have to outsmart what you can’t fight. Explore gorgeous comic book style environments, survive harrowing action scenes, crack puzzles, and decide who is friend or foe. Every choice is on the clock, every call is yours, and the consequences will follow you to the very end. With control over her story, what horrors will you let Clementine witness, and what kind of person will she be in the end? In anticipation of the Walking Dead series finale, download and play with Xbox Game Pass the second season of Clementine’s journey in the undead apocalypse.

Experience the modern horror classic that captured the core of the Alien movies and won over 50 Game of The Year awards. Ellen Ripley’s daughter, Amanda, is trapped aboard Sevastopol space station while an unseen threat lurks, stalking and killing the remaining survivors from deep in the shadows. Hunted by this terrifying creature, Ripley must find some way to escape the station where every breath and movement could be her last. Developed by Creative Assembly in partnership with 20th Century Fox, Alien: Isolation is the perfect distillation of gut-wrenching fear and survival horror.

If you’re still with us down here below the fold, this is our chance to remind you that if you want memes and jokes and possible hints to the games coming your way, follow us on Twitter and Instagram. Earn extra totally (not) real brownie points if you write us a haiku describing your biggest explosion in Crackdown 3. And earn double-extra definitively (not) real points plus a reply with one of our favourite gifs for a tweet showing us you are playing these games! Seriously, you’re going to need to get the game time in now, because we’re going to have even more games dropping before you know it. To stay on top of all these drops with mobile notifications, and to discover and remote install your next favourite game to your console from your phone, get the Xbox Game Pass mobile app for Android or iOS.

With over 100 great games for one low monthly price, plus more games added all the time, including highly-anticipated new Xbox One exclusives the day they’re released, Xbox Game Pass is the new way for you to discover and play your next favourite game. If you haven’t tried Xbox Game Pass, join today and get your first 2 months for $2.