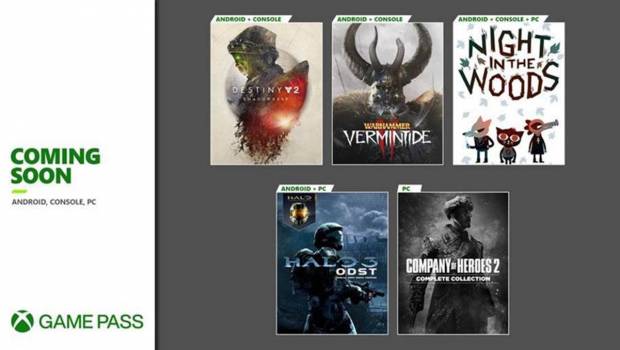 In case you missed it, we also made a few surprise announcements and additions to the service. Check them out below:

You might have noticed a couple extra words in the title of this post: Cloud Gaming! Today, we announced the initial launch line-up of more than 100 games that Xbox Game Pass Ultimate members can play on Android mobile phones and tablets from the cloud (Beta) in 22 countries starting September 15. And did we mention there is no additional cost? So keep an eye on our Twitter and Instagram, where we’ll let you know all the games coming soon to play on PC, console, and Android mobile devices!

And if you didn’t catch the rest of our news from last week, may I recommend a little bit of light reading for you?

Company of Heroes 2 (PC) – September 17
The follow-up to the highest rated RTS of all time, Company of Heroes 2 is an acclaimed blend of strategy and tactics will test players’ knowledge of real-world combat. Now with five armies included to play with in multiplayer and two single-player campaigns. Cover, line of sight, armour, and fully destructible environments all must be considered to lead your troops to victory

Destiny 2: Shadowkeep & Forsaken (Android & Console) – September 22
Dive into the world of Destiny 2 to experience responsive first-person shooter combat filled with stylish finishers and devastating Super abilities. Create your Guardian and explore the mysteries of the solar system while collecting powerful gear to customize your look and playstyle. Brave challenging co-op missions, compete with other Guardians in a variety of PvP modes, and experience a cinematic sci-fi story throughout both the Forsaken and Shadowkeep expansions. You decide your legend.

Halo 3: ODST (Android & PC) – September 22
Play as an Orbital Drop Shock Trooper (ODST) and explore the war-ravaged streets of New Mombasa as you attempt to piece together the Covenant’s motivations for invading the city. As an ODST, you don’t have the firepower or the overshields to go head-to-head with Elites, Brutes, and Hunters – so use stealth and hit-and-run tactics to eliminate threats and sneak behind enemy lines.

That’s not all though, as ODST Firefight is joining The Master Chief Collection on console and PC for the first time, with online matchmaking, dedicated servers, and new custom game modes! Grab some friends and hop into the fan-favorite mode as you take out wave after wave of Covenant invaders across 10 legacy maps.

Night in the Woods (Android, Console, PC) ID@Xbox – September 24
Join college dropout Mae Borowski as she returns home to the crumbling former mining town of Possum Springs, seeking to resume her aimless former life and reconnect with the friends she left behind. But things aren’t the same. Home seems different now and her friends have grown and changed. Leaves are falling and the wind is growing colder. Strange things are happening as the light fades.

We snuck in a few more games between the last time we talked here and now. Check these games out, they’re available for you to play now!

Black Desert (Android & Console) ID@Xbox
Welcome back to Xbox Game Pass! Experience fast-paced combat and an immersive story, within an expansive world just waiting to be explored. The game chronicles a conflict between two rival nations, the Republic of Calpheon and the Kingdom of Valencia. During your action-packed journey, you are accompanied by a Black Spirit – a companion whose destiny is intertwined with your own – as you discover the secret of the Black Stones and the history of their corrupting effects.

Stranger Things 3: The Game (Android & Console) ID@Xbox
The official companion game to Season 3 of the hit original series! Play through familiar events from the series while also uncovering never-before-seen quests, character interactions, and secrets! This adventure game blends a distinctively retro art style with modern gameplay mechanics to deliver nostalgic fun with a fresh new twist. Just like in the show, teamwork is at the heart of Stranger Things 3: The Game. Fans can team up in two player local co-op to explore the world of Hawkins, solve puzzles, and battle the emerging evils of The Upside Down as one of twelve beloved characters from the show.

The Dark Crystal: Age of Resistance Tactics (Android & Console) ID@Xbox
In The Dark Crystal: Age of Resistance Tactics, you will lead a fledgling resistance of Gelfling against their oppressive overlords, the Skeksis, across more than 50 unique turn-based tactics RPG battles. Along the way, you will recruit and customize new allies by assigning them jobs, modifying their abilities, and outfitting them with equipment to ensure victory. With 14 playable characters, including familiar faces from the classic film and the new Netflix Original series, build your own teams and devise winning strategies to overthrow the rule of the Skeksis and restore light to the Gelfling homeworld of Thra!

Last week we announced that Xbox Game Pass for PC and the Xbox App will become exit beta on September 17. We’ve built experiences with the help of the PC gaming community and PC game developers and can’t wait to keep that momentum going. We’ll continue to address your feedback and keep the library fresh – especially with EA Play coming this holiday.

Minecraft Dungeons: Creeping Winter DLC
Xbox Game Pass members save 10% off! A creeping winter spreads across the land, consuming everything it touches – and at the centre of the storm is the Wretched Wraith. The only chance to stop the biting frost is for a hero to face new missions and relentless enemies. Hunt down the source of corruption and discover new armour, weapons, and artifacts!

The Outer Worlds: Peril on Gorgon & Expansion Pass – Available now!
Use your Xbox Game Pass membership discount to save 10% off! Continue your employment in the Halcyon colony with the first of two story-based expansions for The Outer Worlds. Mystery and intrigue abound on the Gorgon Asteroid, formerly the site of one of Halcyon’s most ambitious (and disastrous!) scientific experiments that has led to the asteroid becoming a den of monsters and marauders. Check out new locations, science weapons, customization, and lore on Gorgon!

Sea of Thieves: Talk Like a Pirate Day
Talk Like A Pirate Day is upon us, and there are antics aplenty for players venturing into Rare’s shared world pirate adventure Sea of Thieves this weekend. With a special Gold & Glory Weekend also offering double gold and reputation for savvy sailors playing between September 18 and 21, there are some glorious gains to be made – and the swashbuckling shenanigans don’t stop there! The in-game Storytelling emote will also be given to Game Pass members playing during September 17 and 20, just to make sure our pirates have the right tools to regale others with their tales from the seas. The Summer of Sea of Thieves event is ongoing until September 30, also offering opportunities to snag a fine stash of player titles and cosmetics. There’s never been a better time to be a pirate!

Save 25% on Disgaea 4 Complete+ for PC until September 17
If you’re enjoying Disgaea 4 Complete+, you can buy it between now and September 17 and enjoy a discount of up to 25%! Dive into a tale of revolution and redemption, woven throughout a dark and hilarious realm of vampires, werewolves, and other devilish denizens. Engage in immersive and in-depth tactics-based gameplay brimming with over-the-top destructive action and unload a horde of special features to take your Netherworldly adventures to another level. Brace your belt pouches and grab your sardines; the ultimate HD Disgaea game has arrived, dood!

Even more September Quests are going live this week!  There are dozens available, but here’s a couple to check out:

Check back for daily, weekly, and monthly Quests on your console or see all your Quests in the Xbox Game Pass mobile app!  Redeem points for more Xbox Game Pass, Xbox gift cards and giveaway entries.

I know we haven’t been doing many favors for your hard drives with our recent announcements, but let’s save some room for the games that are leaving soon and give them a proper send-off! Remember to use your Xbox Game Pass membership discount to save up to 20% if you want to keep these games for good.

Lastly, you don’t have to score your last goal just yet. While Rocket League (Console) is leaving soon, keep an eye on their Twitter for more information soon on when they are going free to play.