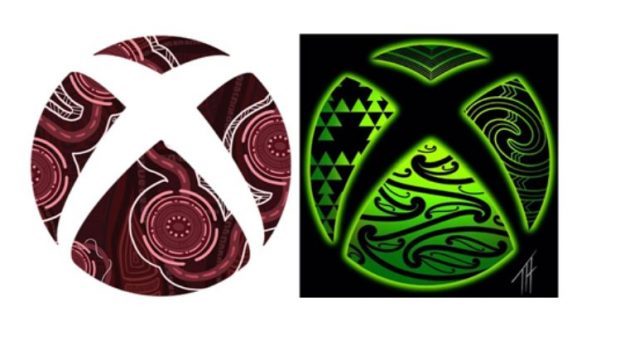 Today, and throughout the year, Xbox is celebrating the rich histories of Indigenous peoples all over the world for International Day of the World’s Indigenous Peoples.

Representation is important. We say this throughout the year for all underrepresented communities, but it’s particularly important for the Indigenous community. Each tribe has a unique style to their artwork as well as medium (e.g. basketry).

We worked with Indigenous artists across the world to redesign the Xbox logo in a way that was authentic to them and their tribes. In Australia and New Zealand, Xbox ANZ partnered up with Rubii Red, and Haimona Maruera and Dillon King respectively.

“The work is my interpretation of connection, community, and journey. A lot of my work reflects those themes, because as a First Nations woman, they are important to me and have helped shape me into the person I am today. I’m on a journey, learning about who I am by connecting to the community and learning more about my culture from my Elders,” said Rubii, who produced a stylized logo in the traditional Lama Lama style.

Haimona and Dillon created an Xbox Sphere that followed traditional Māori styling. “As proud descendants of Ngāti Ruanui, Te Āti Haunui-ā-Pāpārangi, Tūwharetoa, Ngāti Kahungunu ki Heretaunga and Ngāti Kahungunu ki Te Wairoa, this design derives from the Māori atua (god) named Māui. Māui was the infamous atua known by several names such as Māui- Pōtiki (the last born), Māui-Tinihanga (the mischief), Māui-Tikitiki-a-Taranga (the topknot o Taranga), and Māui-te-whare-kino (the house of trouble). This infamous atua brought the inquisitive and the intellectual attributes to our world. This Xbox logo represents the key art functions of Te Ao Māori, which we practice as guardians of our culture and identity,” says Haimona.

“This sphere design depicts multiple art forms that the indigenous people of Aotearoa uphold and practice as carriers and guardians of our culture and identity.”

Xbox will be taking additional initiatives to celebrate Indigenous peoples around the world throughout the rest of the year. To learn more about these initiatives, or to see all of the designs from our talented Indigenous partners, head over to Xbox Wire.