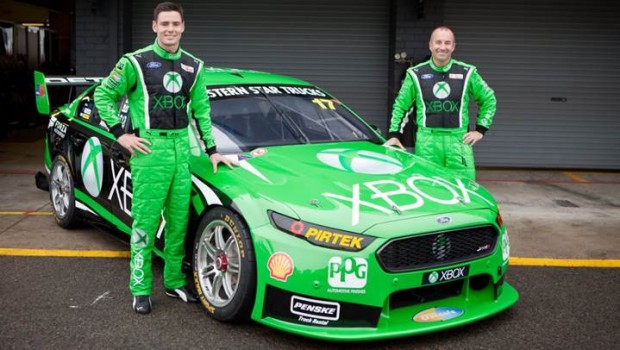 The Supercheap Auto Bathurst 1000 race weekend is one of the most iconic events in the motorsport calendar globally, and this weekend Xbox teamed up with DJR Team Penske for the 2015 event to celebrate being the home of racing at Australia’s world renowned circuit, Mount Panorama.

Continuing its long-standing involvement in V8 Supercars in Australia, Xbox brought legends from both the gaming and racing world to the track, including Xbox Racing drivers Scott Pye and Marcos Ambrose, Master Chief and Agent Locke from the upcoming and highly-anticipated Halo 5: Guardians, and Top Gear’s The Stig, who performed a hot lap of the iconic track for the first time ever, much to fans delight.

In addition to Craig Lowndes’ and Steven Richards’ celebrations in the Xbox One victory lane and the many thrills from the Xbox One corner, the weekend also saw the culmination of the Forza Motorsport 6 ‘Drive to Win’ initiative, pitting racing fans from around the world against one another in an in-game time-trial to register the fastest lap around the Mount Panorama circuit.

Australia’s own Brendan Christie from Melbourne was eventually crowned the overall winner, claiming the title of King of the Mountain, scoring USD$5,000, a private hot lap with Top Gear’s The Stig, and having his Gamertag emblazoned on the car, circuit and the race suit worn by Marcos Ambrose throughout the weekend.

The Xbox #17 Ford FGX Falcon, driven by Pye and Ambrose, had mixed fortunes, getting off to a great start to begin the race in 7th position on the starting grid, following a highly successful practice and qualifying. After an exciting, nail-biting race that saw the Xbox Racing car in the top 10 for much of the day, an unfortunate crash on lap 137 rendered the car unable to finish.
Jeremy Hinton, Head of Interactive Entertainment Business at Microsoft Australia, said: “We were so pleased to be able to share the biggest weekend in Australian motorsport with some of the most avid Xbox and Forza Motorsport fans from around the world. This year’s partnership with the DJR Team Penske race team has been such a resounding success and further cemented that Xbox truly is the home of racing in Australia.”

The DJR Team Penske crew were pleased with the strong showing from the moment the car took to the track on Thursday, with the team’s hard work transforming the Xbox Falcon into a genuine top contender in the field. The Xbox #17 Ford has its final outing at the Gold Coast 600 in two weeks’ time with a strong race expected.

Xbox and DJR Team Penske partnered for the Endurance series of the V8 Supercar calendar which includes the iconic Mount Panorama Bathurst track as well as Sandown 500 in Melbourne and upcoming Gold Coast 600 on October 23-25.