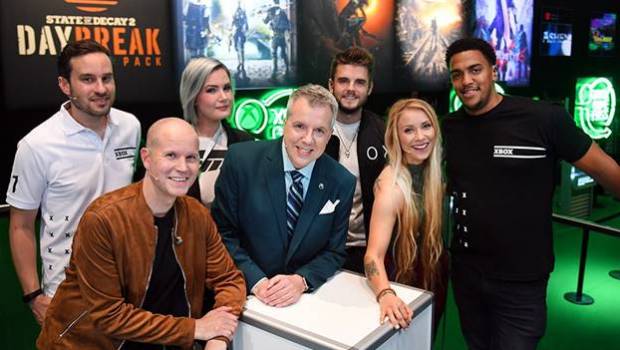 Here at Xbox, we love gamescom because it allows us to connect more directly with our fans, both here in Germany and across Europe. Our European audience has always been important to us, and we’re continuing our ongoing commitment to talent and great studios in Europe, including Playground Games, Ninja Theory, Rare, and Mojang. We could not be more excited to be here in Cologne, where our fans are enjoying one of the most diverse selection of games in recent years with 25 playable titles in our booth. From fast-paced action games to thrilling driving games to fun platformers, games play best on Xbox One.

Today, via a special episode of Inside Xbox broadcast directly from our booth at gamescom, we gave fans here in Germany and around the world a closer look at some of the exciting games coming to Xbox One over the next year, unveiled new Xbox One bundles and accessories, revealed new Xbox Game Pass titles, and much more.

As Forza Horizon 4 races towards launch, we got more information about Team Adventure, the new competitive multiplayer mode that allows players to team up and take on the world in races, games and frantic Freeroam Rushes. With brand new Leagues to rise through, unique rewards to be won and prestigious Grandmaster titles to aim for, start picking your teammates now and be ready when the first four-week series begins on Oct. 2 when Forza Horizon 4 launches worldwide on Xbox One, Windows 10 and included with Xbox Game Pass.

We announced that PlayerUnknown’s Battlegrounds (PUBG) will exit the Xbox Game Preview program on September 4, 2018 to Full Product Release (1.0). While PUBG Corp. will continue to enhance the game and deliver new content to Xbox players, the Full Product Release marks the culmination of our combined efforts in Xbox Game Preview, where we worked closely with the passionate and engaged Xbox community to regularly update, tune, stabilize and enhance the PUBG experience for Xbox One. For more on today’s PUBG news, read the Xbox Wire post here.

Xbox Game Pass provides gamers the ultimate value and freedom to play over 100 great games for one low monthly price. It is also continuously evolving based on valuable feedback from our members and has new games added every single month, including popular releases this summer such as Fallout 4 and Rocket League. Building on this, today, we announced the latest addition to the service with Halo: The Master Chief Collection on September 1, which has been a top requested game by fans.

Ori and the Will of the Wisps Reveals New Gameplay

We got a closer look at the highly anticipated sequel Ori and the Will of the Wisps, with a focus on the new Spirit Trials feature. These fast paced, highly repayable race sequences spread throughout the game allow Ori players to compete asynchronously with other members of the community for in-game rewards and placement on the Spirit Trials leaderboards. Fans at gamescom will get a chance to check out Ori’s immersive world, dynamic combat mechanics, gripping enemy encounters and challenging puzzles for themselves. Ori and the Will of the Wisps releases on Xbox One and Windows 10 in 2019.

Zombie killing fans will be happy to hear that Undead Labs is continuing their post-release momentum through new add-on content for State of Decay 2. Daybreak Pack will give fans more of the multiplayer action they’ve been asking for with an all-new siege defense game mode that gives players the ability to fight zombies, complete missions and earn rewards as a respawning Red Talon soldier with up to three friends. It will be available on Sept. 12. State of Decay 2 is available on Xbox One, Windows 10, and also included with Xbox Game Pass. For more on today’s State of Decay 2 Daybreak Pack announcement, read the Xbox Wire post here.

New Xbox One Bundles and Accessories Offer Something for Everyone

We’ve announced more new Xbox One bundles and accessories at this year’s gamescom than ever before, with 8 new bundles and 3 new controller designs, including the first ever Xbox One X Special Edition console bundle—the Xbox One X Gold Rush Special Edition Battlefield V Bundle—as well as the Xbox Wireless Controller – PlayerUnknown’s Battlegrounds Limited Edition and new camo and shadow options for Xbox Design Lab. For complete details on all of our announcement, read the Xbox Wire post here.

From Blockbuster Titles to Innovative Indies, Games Play Best on Xbox One

Xbox One continues to be the best place to play the biggest and best blockbuster games, including over 220 titles enhanced for Xbox One X, the world’s most powerful console. Dozens of new games from some of the world’s most talented creators are coming to the platform, such as Bethesda’s Fallout 76, Ubisoft Massive’s The Division 2, Rockstar Games’ Red Dead Redemption 2, Square-Enix’s Kingdom Hearts 3, Capcom’s Devil May Cry 5, Electronic Arts’ Battlefield V, 4A Games’ Metro Exodus, Activision’s Call of Duty: Black Ops IV and Square Enix Montreal’s Shadow of the Tomb Raider, with many enhanced for Xbox One X. On today’s episode of Inside Xbox, we took an in-depth look at a number of these titles, including:

There’s lots of big Xbox One news here at gamescom, but we’ve got some news for PC gamers too, with our announcement of five games soon to be available via Steam and on PC disc. ReCore: Definitive Edition is an action-packed adventure in which charming robotic companions are your key to saving humankind.  We’ve also got four great titles that everyone in the family can enjoy. Super Lucky’s Tale is a delightful 3D platformer that follows the adventures of a brave fox named Lucky on his quest to help his sister rescue the mysterious Book of Ages. Disneyland Adventures allows Disney fans of all ages to explore Disneyland park, embarking on quests, meeting characters and more. In the 3D platforming game Rush: A Disney-Pixar Adventure, fans can visit the worlds of six beloved Disney-Pixar films to solve puzzles and uncover hidden secrets. Finally, you can create the zoo of your dreams with Zoo Tycoon: Ultimate Animal Collection. Don’t miss them!

Finally, come down to our booth at gamescom this year and visit the Inside Xbox Lounge in association with Samsung. The lounge marks the start of an official partnership between Samsung and Xbox in Europe – it’s an area to chillout away from the busy show floor to experience the ‘Unbeatable Combination’ of Samsung’s premium QLED 4K TVs, alongside Xbox One X, the most powerful console in the world!