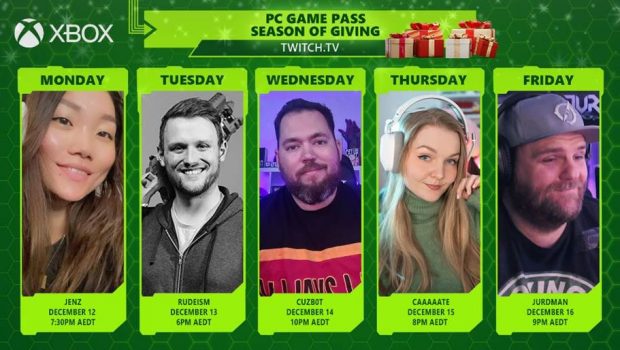 Christmas is the season of giving, and this year Xbox ANZ is giving the gift of PC Game Pass! Starting on the 12th of December, Xbox ANZ is celebrating the holiday season in style by hosting the “PC Game Pass Season of Giving” featuring five partnered steams with local ANZ creators and giveaways of holiday-themed PC peripheral packs and PC Game Pass codes.

From the 12th of December until the 16th, every night will see a different streamer spread the festive cheer and show off one of their favourite games to play through PC Game Pass. They’ll also giveaway multiple PC Game Pass codes as well as a PC peripheral pack to one lucky viewer – perfect for anyone looking to change up the gear, or just someone that’s looking to join the PC community.

The builder of unconventional controllers, Rudeism, will be hosting Tuesday (13th December) nights stream. He’ll be taking the wheel in Forza Horizon 5, with a self-made car-themed controller that will impress gearheads across the country.

The other four streams will be anchored by some of the jolliest local streamers from Down Under. Jenz, Cuzb0t, Caaaaate and Jurdman will each bring their own flavour to the Season of Giving and be giving away a PC peripheral pack and PC Game Pass codes to those that tune in.

Be sure to check out the stream schedule below and tune in for a chance to win stacks of PC Game Pass prizes: