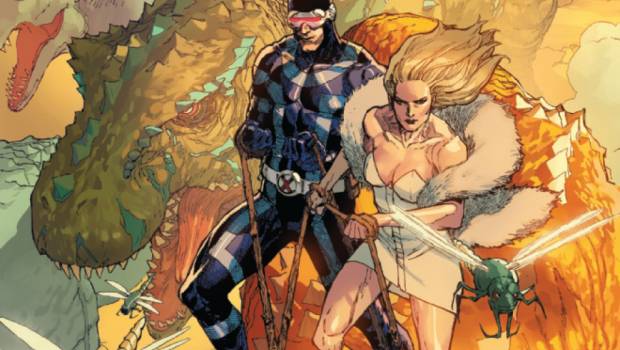 Summary: Octogenarians look for flowers, Scott and Sebastian are humiliated, and Emma pretty much gets called a hooker in a fantastic 3 issue into what is most definitely a long run by Hickman.

The old folks home fights back!

(Due to an unforeseen debilitating illness that has no bearing on the current world climate, I was forced to take many months off writing. I am back! Some of these reviews will cover comics that were released during my illness. There will also be brand new ones. I’m honored to be writing for all of you again!)

The Story: The X-men get beat up by the Golden Girls.

Summary: The issue opens with Pixie and an unnamed (I didn’t recognize him) mutant gathering flowers in the Savage Land when four figures come through one of Krakoa’s portals. Assuming they are mutants, they let their guard down and get slozen (slimed… and frozen). The figures then make their way through the fields of flowers.

We then switch to Krakoa and the Quiet Council’s chambers. Everybody arrives and Jean and Emma engage in some terse but overall witty banter. The Savage Land Krakoan gate has ceased to function and the council can’t figure out why. Krakoa is also undergoing various shifts in land mass and density that are concerning for the council.

As we switch back to the Savage Land, we find our four villains who take of their masks and… it’s for elderly women. They have slimed the rest of the mutants in the area and are there for the flowers. Their names are Edith, Augusta, Opal, and Lily. Interestingly enough, Edith is in a floating wheelchair just like Xavier used to use circa 1992.

The Quiet Council dispatches Cyclops, Emma and interestingly enough Sebastian Shaw to the Outback. That means we get an appearance by one of my favorite X-men: GATEWAY! (YIP-PEE!) Gateway teleports them directly in front of the girls (from now on I’ll be using the same name for them that Emma gave them: The Octogenarians.) Cyclops does try the diplomatic approach, but soon realizes that that ay not work this time… considering they basically call Emma a hooker (the language used is far more censored and hilarious.) Sebastian then steps forward and attempts to bargain with them. A few threats here, a few compliments there… and then he gets slimed.

The slime apparently neutralized his powers because the Octogenarians kick the living snot out of him. It really is a sight to see. Cyclops gets involved and blasts all four of them back. One of them fakes a broken hip and managed to slime him as well. He also gets the snot beaten out of him.

After an explanation of why they are doing this (long story short, they were going to control the worlds food supply until the Dawn of X happened) they leave Emma with a warning.

The issue ends back at the Quiet Council where Emma declares that they have a problem.

Final call: I realize things have progressed from this issue, but I have to say that I’m very sad the girls have not shown back up. They are fantastic characters and I really hope that we haven’t seen the last of them. Kudo’s to Hickman for making them all scientists as well. I’m a big fan of the recent Wasp titles and I’m down for anything that encourages girls to get into science.

The inhabitants of Krakoa are slowly building up a healthy rogues gallery. They’ve got the Octogenarians, Morgan Le Fay, and whatever the name of the terrorist organization is that is plaguing X-Force (I don’t really read that title so you’ll have to forgive me.) The fact that 2 out of the 3 villains are brand new ones means Hickman isn’t relying on the old crutches. He’s even buried Sabertooth under Krakoa for god knows how long This is a new game people.

I know we are coming up on issue 9 soon, but this issue really is a standout on the first 8 issues of Hickman’s run on the title.