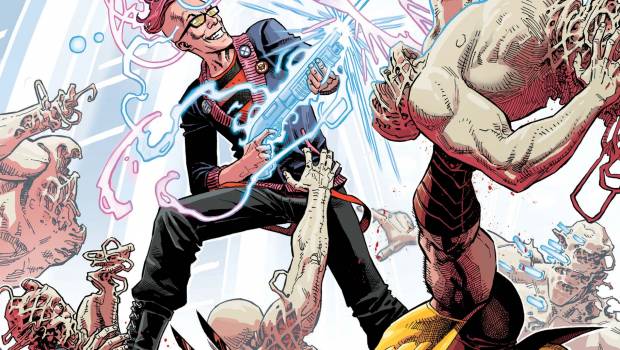 Summary: The first few members come together to save a teammate, the mutants try to regroup, and a new threat is forming (literally).

The Story: The X-men mourn Charles Xavier, the resurrection protocols get to work, and Domino is violated even more.

Background: Even in the lightest of situations, there must still be a darkness. In this case, the darkness definitely fights back.

Summary: While mutants mourn Charles, Magneto asks Jean to help bring him back. Jean is unsure if she can, even with the protocols. The main Cerebro unit that Charles wore was destroyed in the attack, the backup is untested and might not work. Magneto tells her it must work or they are all in serious trouble. Jean leaves it to Beast to fix the system.

Elsewhere on the island in the Healing Gardens, Cecilia Reyes performs autopsies on the terrorists that were killed in the attack. In so many words, she basically confirms that they were ready for combat. They also discover how they got in: they have grafted patches of Domino’s skin to themselves. Krakoa registered them as mutants and let them land.

Wolverine goes to track Domino down and winds up in South Korea. After a security guard is alerted to his presence, Quentin Quire arrives and freezes the scene. They end up locating Domino after fighting some muscle henchmen (literally, henchmen that have no skin but you can see their muscles.) The entire right side of her body has been skinned for the grafts.

While Beast tries to fix Cerebro, Jean reads the mind of the last remaining terrorist and when asked what she sees, she doesn’t know. All we see is numerous floating masks.

Final thoughts: This is a very interesting and tonally weird book. In this new era of mutants literally being superior over everybody else, the book shows the need for X-Force even more. Not every attack against the nation is going to be done on the political stage. There is always going to be a need for a secret task force to handle the dirty work.

I’m glad to see the inclusion of Dr. Cecilia Reyes and Sage. They have always been two of my top 5 favorite mutants and I welcome any chance to see them on a regular or semi-regular basis. Cecilia Reyes being a part of this team just shows how far she’s come since her debut. She started as someone who wanted nothing to do with being a mutant. Now she has flocked to an all mutant island. Hickman has shown how happy mutants are that this place exists.

Kid Omega (Quentin Quire) on the other hand, is a cocky bore. His character has never really stuck with me. All he has been is an annoying kid that Logan has had to babysit and while he has had a few (and I mean a few) good moments, namely sacrificing his piece of the Phoenix force to resurrect Jubilee and give back her powers, his character has largely gone unchanged for years now. He’s obnoxious and annoying and … well, I guess every team needs a jerk.

I assume Domino is going to brought into the team, but her mind is probably going to be very dark for a long time. She has been skinned alive and kept in a stasis tube. She’s going to be pissed.

I know the book has progressed since this issue, but this was a good real start to the building of the team. The first few members come together to save a teammate, the mutants try to regroup, and a new threat is forming (literally).