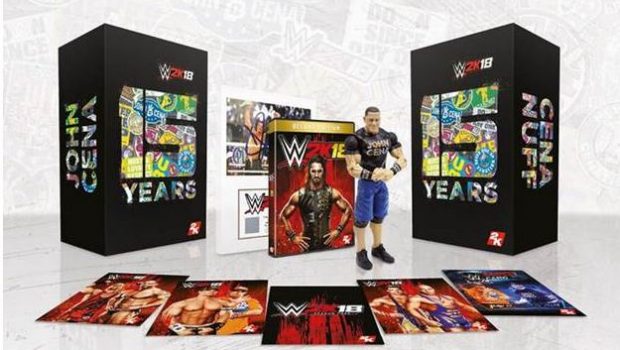 Today, in celebration of the 15-year career of WWE Superstar John Cena, 2K announced plans for the Cena (Nuff) Edition of WWE® 2K18, the forthcoming release in the flagship WWE video game franchise.

Limited to 30,000 copies worldwide and packed with an impressive collection of exclusive memorabilia and digital content, the offering will pay homage to his distinct position as WWE’s most frequently cheered – and frequently booed – personality. The WWE 2K18 Cena (Nuff) Edition will be available exclusively for the PlayStation®4 computer entertainment system and Xbox One at EB Games Australia (SRP $199.95 AUD) and EB Games New Zealand (SRP $209.99 NZD).

Developed collaboratively by Yuke’s and Visual Concepts, a 2K studio, WWE 2K18 is not yet rated by the Australian Classification Board and the Office of Film and Literature Classification. WWE 2K18 is currently scheduled for worldwide release on October 17, 2017 for the PlayStation 4 computer entertainment system and Xbox One, as well as this Fall 2017 for Nintendo Switch. Early Access players will receive their copies and in-game bonuses beginning four days early on October 13, 2017. For more information on WWE 2K18 and 2K, visit wwe.2k.com, become a fan on Facebook, follow the game on Twitter and Instagram using the hashtags #WWE2K18 and #BLN1 or subscribe on YouTube.