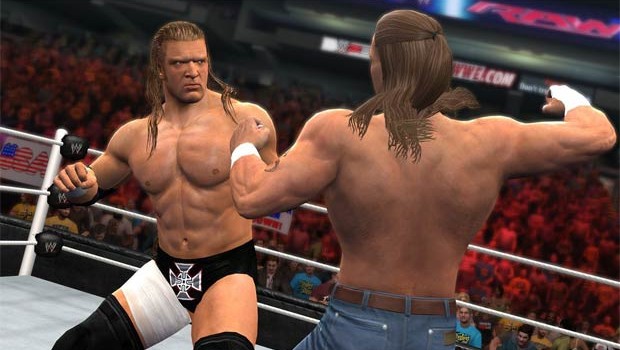 Sydney, Australia – March 11, 2016 – 2K today announced that WWE® 2K16, the latest addition to the flagship WWE video game franchise, is available now on Windows PC via Steam and other leading outlets. WWE 2K16 for Windows PC delivers all of the action offered in WWE 2K16 for the PlayStation®4 computer entertainment system and Xbox One, the all-in-one games and entertainment system from Microsoft, including the largest roster in franchise history of more than 120 playable characters; two playable versions of 2015 WWE Hall of Fame inductee and global action film icon, Arnold Schwarzenegger; and the story-driven 2K Showcase featuring WWE Hall of Famer and WWE 2K16 cover Superstar, Stone Cold Steve Austin®.

In addition, WWE 2K16 provides consumers with all of the game’s previously released downloadable content for Windows PC, including new playable characters, moves and story-driven content, at no additional cost. Details on the available content are as follows:

The following items are immediately accessible at launch for consumers who purchase WWE 2K16 for Windows PC, with no additional charges:

“I’m a bit of a WWE historian myself, and one of the things I’m most excited about is being able to play as the past, present and future of WWE,” said WWE Superstar Seth Rollins. “Every year, the WWE 2K franchise gives a sample of that through downloadable content, whether it’s great WWE Legends and rivalries of the past or the latest additions to the NXT roster. If you buy WWE 2K16 on PC though, you get all of that awesome DLC content included free of charge. Yeah, you read that correctly: the DLC is free.”

“We are always looking to expand WWE 2K’s offerings on additional platforms and were encouraged by last year’s PC franchise debut,” said Greg Thomas, President at Visual Concepts. “WWE 2K16’s power-packed features and free downloadable content are a great combination for the PC platform and help us reach even more WWE 2K fans around the world.”