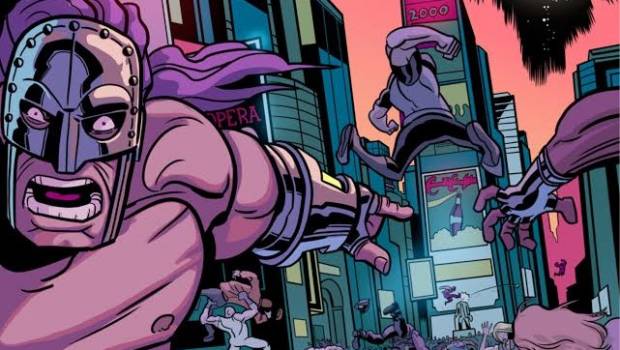 Summary: The aliens have invaded and the search for Rory begins.

Rory’s declaration of being the Galactic Champion of the Universe has backfired, prompting a worldwide invasion of spandex-wearing aliens from the planet of Wrestletopia. The challenge had been set and it’s up to Rory to step up and defeat the wrestling overlord – Manifest Destiny – thus extinguishing the flames of war. The question is, can Rory fulfil the challenge? 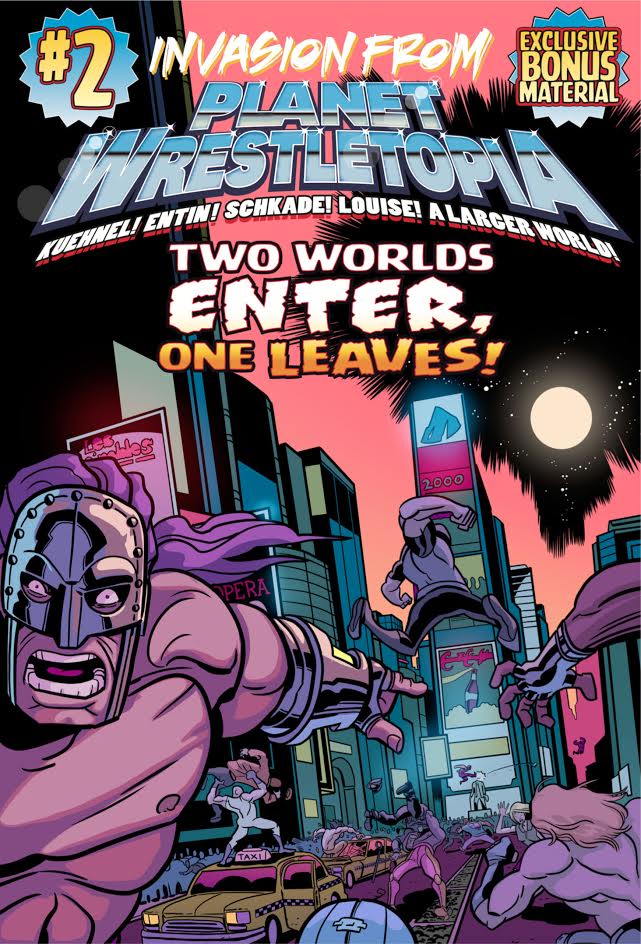 This issue begins with the invasion in full swing now, with sightings of Wrestletopian’s occurring worldwide. A public declaration is broadcast live on television by Manifest Destiny, calling forth Rory to answer for the disharmony he has caused in the cosmos by declaring himself the Galactic Champion. A challenge is set, whereby Rory will face-off between Manifest Destiny in an almighty wrestling match that will define who is the true wrestling champion. Meanwhile, Rory is sinking beer at the pub, completely unaware of the unfolding invasion. Three burly and strangely dressed wrestlers waltz into the pub, requesting that Rory come with them now. Unwilling to take orders from them, Rory makes the first move in a bid to launch a surprise attack on these strange fellas. Unfortunately for him, he is outnumbered and underestimates their skill, whilst overestimating his.

Ahh yes, this crazy story is back with another hilarious and ever-entertaining chapter. The Wrestletopian’s have landed and with them comes a whole new and wonderful bunch of complications for Rory and planet Earth. I absolutely love the absurdity of this story and how easy it is to fall into. Anyone who knows me, knows that I’m not a wrestling fan and in fact know zero about the sport and what it entails, however, this comic piques my curiosity in an altogether strange and peculiar way. Firstly, I’m very interested in Rory and his self-indulgent and arrogant personality. He had a bit of the lure of the anti-hero about him, like some kind of likeable but pathetic character. Secondly, we are revealed a small glimpse into Rory’s past as a child and the trauma he experienced from his father walking out on him. This interestingly enough sheds some light on why he may be the way he is, which in turn makes him much more relatable. Finally, Manifest Destiny. I mean, c’mon, this guy is insane! I love him and can’t wait to see what crazy shenanigans we will see from him in the future.

The art by Dan Schkade in expressive and vibrant, with a wonderful cartoony quality to it.  I really like how he exaggerates emotions and expressions of the characters, making them look like they are overacting in a hilarious pantomime. It’s funny and works really well with the witty and funny pacing of the dialogue. The panelling is simple and easy to visually follow, making the story flow in an effortless and fluid way. I do like those single page panels though, as we get to see some great details and more expansive landscapes and settings. The colouring by Marissa Louise matches the light-hearted and buoyant tone of the story with a bright and vivid colour palette being used. There is quite literally never a dull moment in this story, with lovely bright colours dominating each page.

Overall, I quite like this story, finding it to be a surprising admission seeing as I’m not into wrestling. For me, it’s more about the funny and clever writing that comes together with the art for form a highly enjoyable read. There also appears to be an interesting side to Rory that we are beginning to see, with small glimpses into his past being revealed. Here the story takes a more serious tone, as we delve into personal territory.