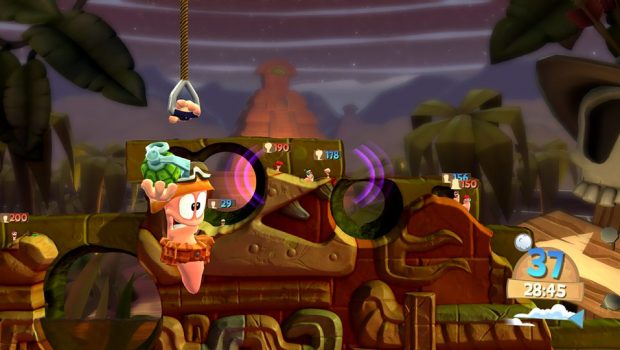 Worms W.M.D is host to extensive single player and multiplayer modes. With the single player focusing on 20 training missions, 30 campaign missions and 10 challenges and the multiplayer being both local and online for up to six players.

Throughout the game, players will get to take part in turn-based annelid warfare across 6 beautiful themes: Countryside, Downtown, Frontier, Motherland, Rainforest and Orient. The landscapes themselves now feature stunning, detailed hand drawn art which showcases one of the new gameplay features: buildings.

Buildings are a fantastic new addition which offer a great tactical advantage to the classic Worms gameplay. Players can now enter buildings amongst the landscape and fire off shots from inside, but when the turn passes, their worm will be hidden inside. In addition to being the ideal place to hunker down, buildings are the perfect location to lay an ambush for your unsuspecting opponents. Stick down a Sentry Gun – then sit back and wait for the carnage to commence!

Worms W.M.D will be released on the 23rd August for Xbox One, PlayStation 4 and PC and is currently available to pre-order from the Xbox Games Store, the European PlayStation Store, Steam and GOG.