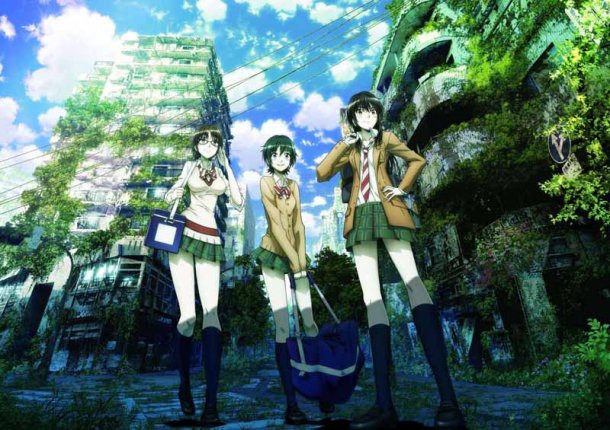 Wednesday, 25 September 2013: Madman is proud to announce yet another digital screening milestone in the acquisition of brand-new anime series, COPPELLION, which will premiere 3rd October on the Madman Screening Room (madman.com.au/screeningroom) in simulcast with Japan.

COPPELLION is a post-nuclear action/drama series based on the hit manga series of the same name by Inoue Tomonoki and is produced by ‘GoHands’, the talented new animation studio, founded in 2008, behind the MARDOCK SCRAMBLE films and last year’s hit action series ‘K’.

In the year 20xx, the old capital that once stood proud lies in ruins, devastated by a catastrophic nuclear meltdown that has wiped out 90% of the area’s population. Decades on, three seemingly normal looking high school girls arrive at the old capital without any kind of clothing to protect them from the radiation.

They are COPPELLION, genetically engineered children who are impervious to the effects of radiation. As members of the Ground Self-Defence Force Dispatch 3 Special Force, their mission is to rescue survivors in the radioactive wasteland. The struggle for life begins now…

COPPELLION will stream online and in simulcast on the Madman Screening Room, day and date with the Japanese TV broadcast on 3rd October, 2013.

COPPELLION will also release to home and further digital formats in 2014.