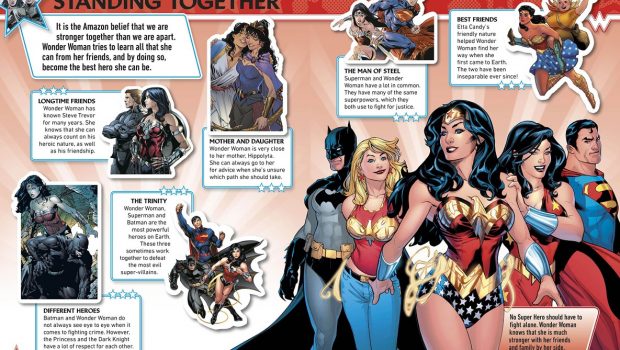 Wonder Woman the Ultimate Guide to the Amazon Warrior Review

Summary: Wonder Woman the Ultimate Guide to the Amazon Warrior is 'wonderful' that is filled with amazing images and text on the history of this comic book character!

With the release of the highly anticipated Wonder Woman film starring Gal Gadot and to celebrate Wonder Woman Day (June 3), DK books have released a true celebration of the Amazon princess with this compendium showcasing one of the world’s most popular female superheroes. Written by Scott Beatty, Alastair Dougall and Roger Stewart, Wonder Woman the Ultimate Guide to the Amazon Warrior is a beautifully presented 200-page hardcover book that goes into the detailed history of this comic book legend created by William Moulton Marston in January 1942. 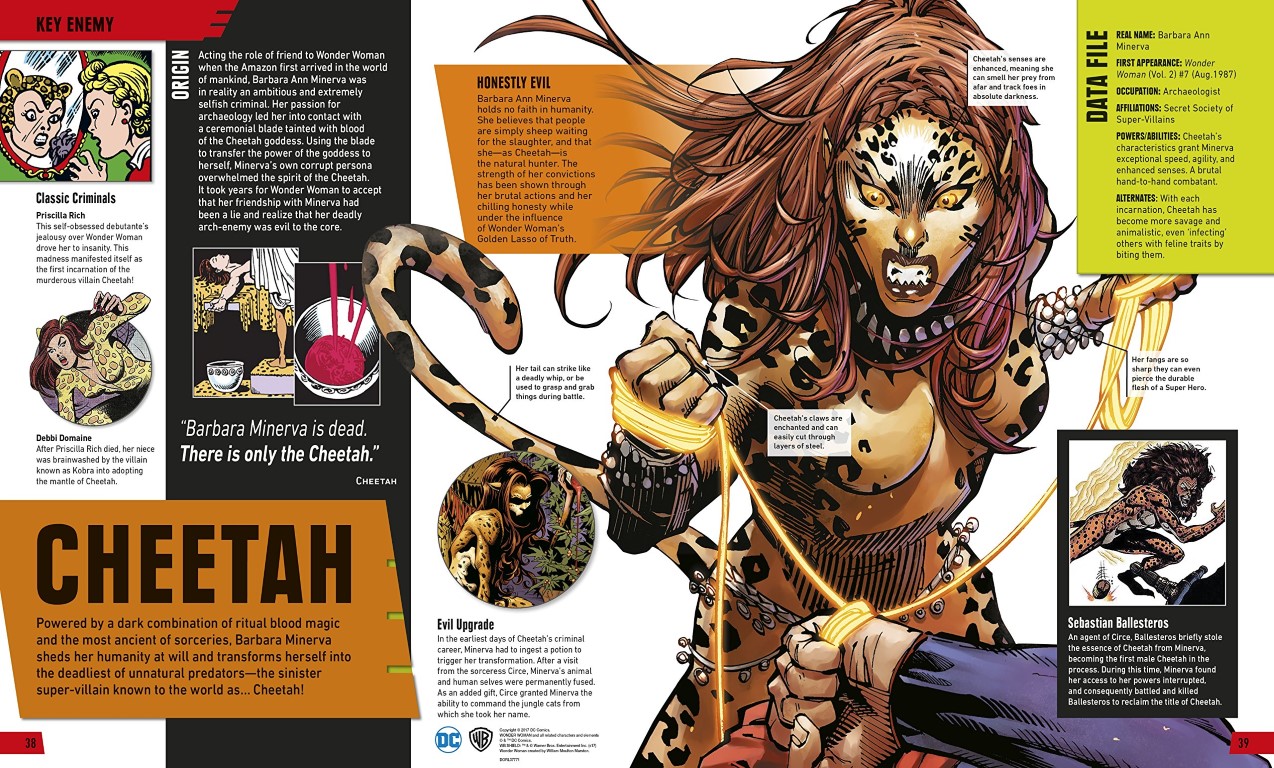 It should be noted that although Wonder Woman exists in many other mediums, this release from DK Books revolves around the traditional comic book character and all her incarnations which include everything from the Golden Age (1942) to 2016 and of course her many reboots and changes. Furthermore, 2016 was the 75th anniversary of Wonder Woman and writers Beatty, Dougall and Stewart successfully capture the themes and key points of the Amazon’s diverse and interesting history.

Wonder Woman the Ultimate Guide to the Amazon Warrior is split into seven sections with the first part of the book focusing on the following areas; 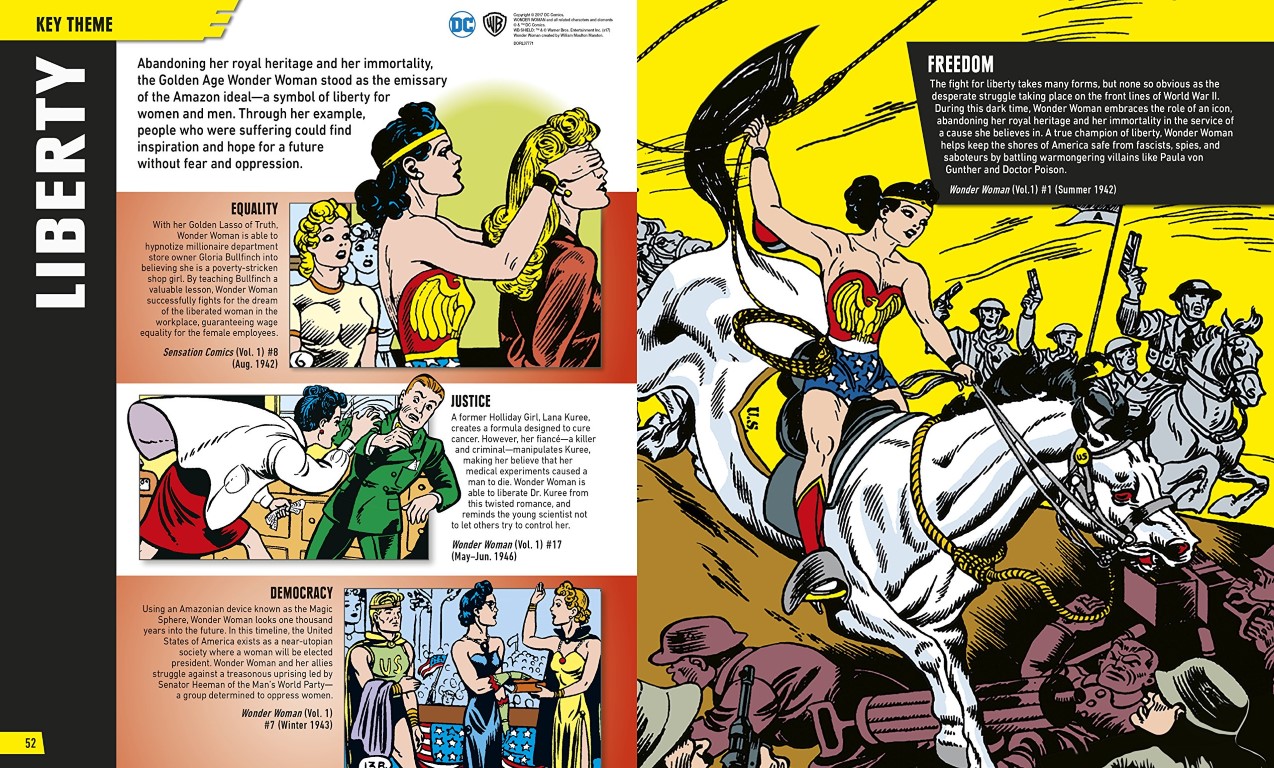 The foreword of this book is written by comic legend Greg Rucka who is the current writer of Wonder Woman and helped relaunch the character following Rebirth #1 that in essence, made away with the New-52. Greg discusses his passion about Wonder Woman and what this character represents, including her evolution and how she challenges us to better than we are. One great highlight of this book is the timeline of Wonder Woman which includes all the incarnations of Princess Diana of Themyscira such as William Moulton Marston original version, all the way up to Greg Rucka’s post-Rebirth creation.

I also enjoyed the section on The Creation of a Legend which highlighted the difference Wonder Woman played in this male dominated medium with characters such as Superman, Batman, The Flash and The Green Lantern. The co-creator of Wonder Woman was H.G. Peter, the artist behind the character and like William Moulton Marston, both were advocates for feminism and definitely both before their times. The book touches upon the costumes of Wonder Woman, including her armour, magic lasso and weapons. The section on her powers which features a beautiful image drawn by Darwyn Cooke showcases her traditional powers that include Speed of Lightning, Strength of the World, Hunters Instinct, Wisdom of the Ancients, Sisterhood of Fire and Inner Beauty. 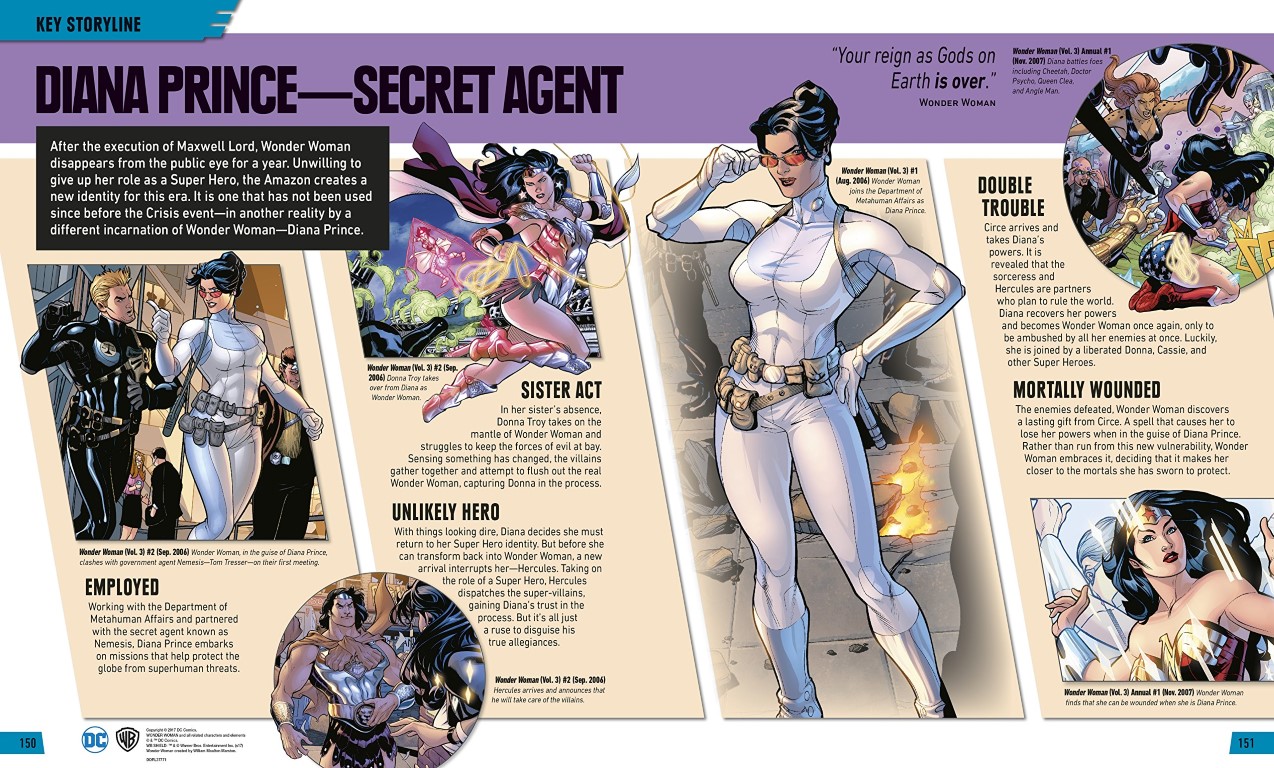 Furthermore, there’s some truly awesome imagery in this book such as Nicola Scott to Alex Ross and of course golden artist H.G. Peter who all bring this character to life. A special mention should be made about the highly quality paper stock which makes the images almost jump out of the page. The image done by Alex Ross with Wonder Woman and her invisible plane is almost worth the admission price alone. Key characters from her lore are also discussed like her mother and Queen of the Amazons (Hippolyta) to one of her most dangerous nemesis, Ares the God of WAr. The book explores her villains like Giganta and even the Olympus Pantheon who played a key part in this character. There is a brief mention on the multiverse but this page focuses on the main universes in the DC mythology.

Seeing the character evolve through the different ages such as the Silver Age to the Bronze Age and all the way to the New Age is quite interesting and in the end, her essence is carried through all the various incarnations. Sure, her costume has changed over the years, including romances such as the brief one she had with Superman which is no longer in continuity but it highlights the diversity of the character and how she changed with society. 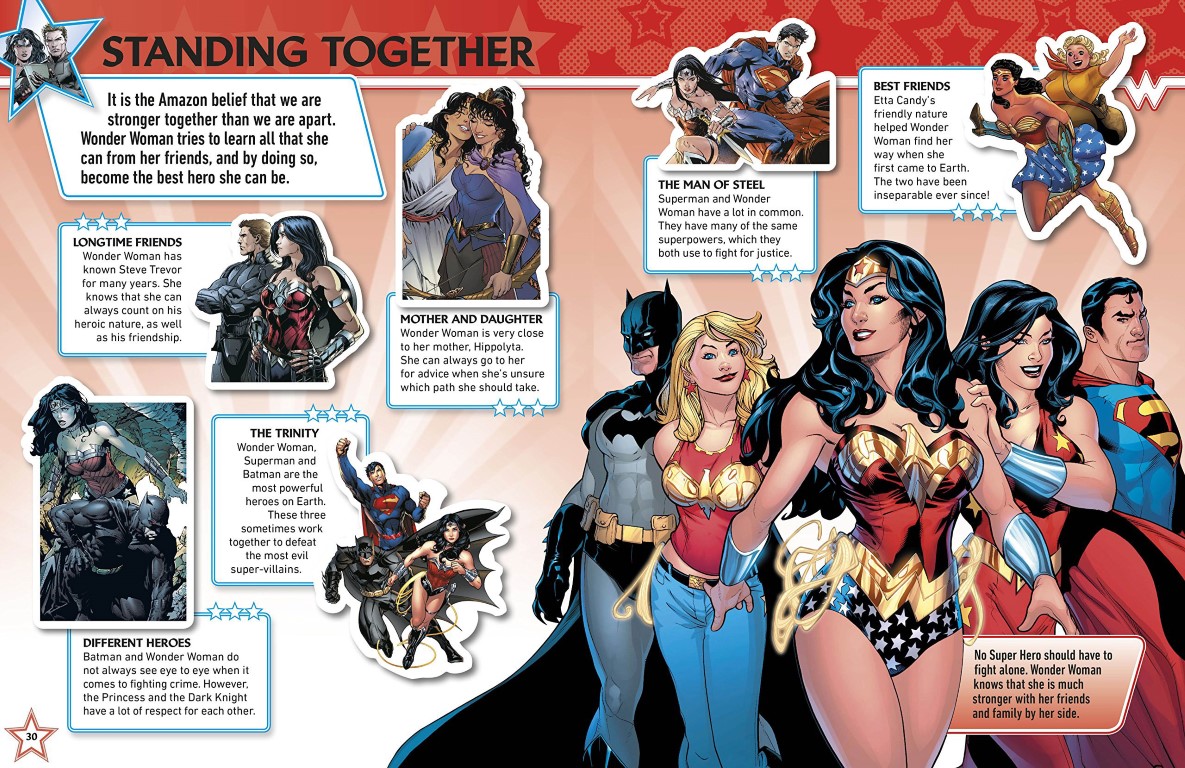 The other six elements with numerous sections include The Golden Age, The Silver Age, The Bronze Age, The Dark Age, The Modern Age and the New Age. Although I’m a fan of Wonder Woman, my knowledge generally starts around the late Bronze Age so the Key Storyline areas really helped inform me of this character’s history. For example, one section called Impossible Tales highlights some of the strange stories that Diana experienced like a wish gone wrong and even a team-up with her mother with both of them as teenagers challenging the Multiple Man. Add in key themes, characters, allies and Wonder Woman the Ultimate Guide to the Amazon Warrior is an wondrous guide from start to finish.

So whether it’s ‘The Dark Age’ where the universe was erased and reborn, another ‘new’ universe in the wake of Flashpoint or even ‘Rebirth’, this book is almost a bible on all things Wonder Woman. The text is well written and the book is set out very well. Wonder Woman the Ultimate Guide to the Amazon Warrior closes with a beautiful double page spread of the Amazon in all her different incarnations with a very powerful closing statement from Wonder Woman #62…

“And now we turn to another blank page.
A future standing before us like a freshly-fallen snow.
Awaiting that first mark, that first forward footstep.

A new journey to be started.
A new promise to be fulfilled.
A new page to be written.

Go forth unto this waiting world
With pen in hand, all you young scribes,
The open book awaits.

Be creative.
Be adventurous.
Be original
And above all else, be young. 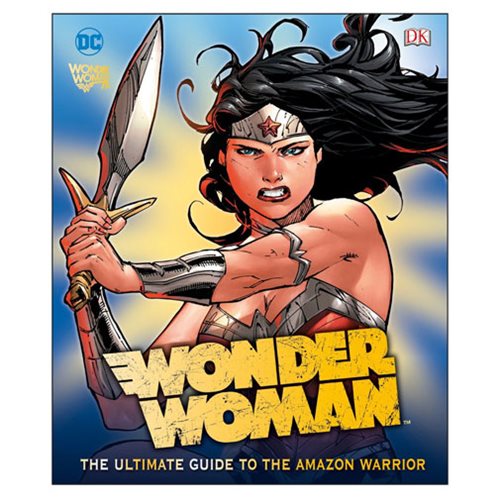 Wonder Woman the Ultimate Guide to the Amazon Warrior is like a Greek Epic that covers all facets of this amazing female superhero created way back in 1942. Not only is it a history book but also a celebration of Wonder Woman that has some beautiful text, amazing images from the comics and a title that can be revisited on many occasions, just as we visit Diana in her own comic. 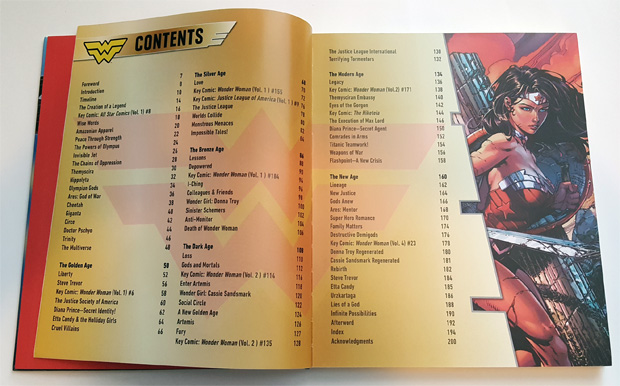 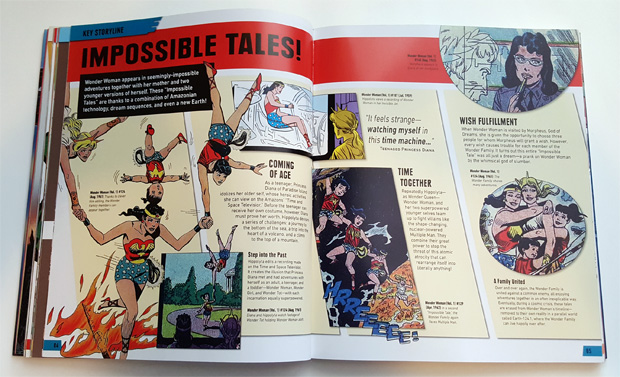 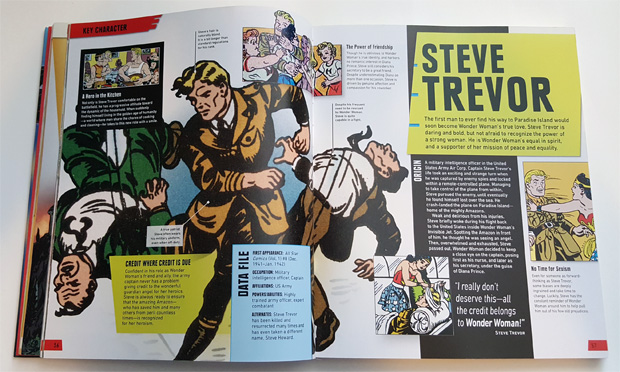 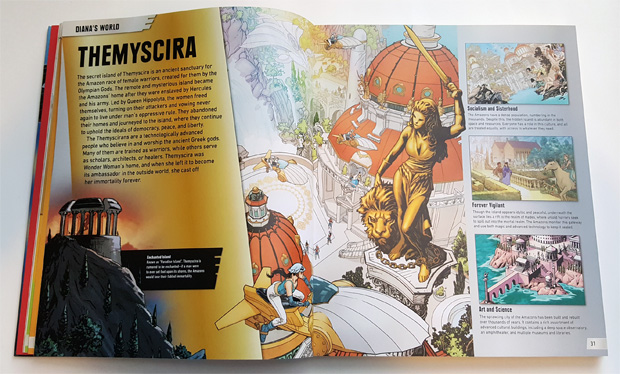 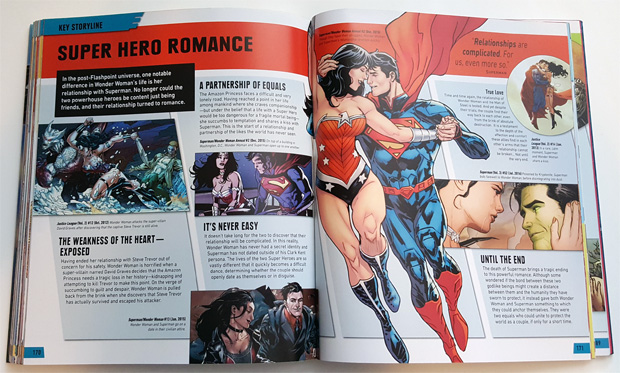 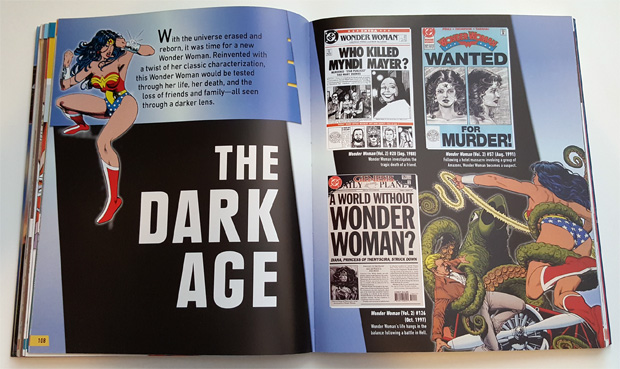 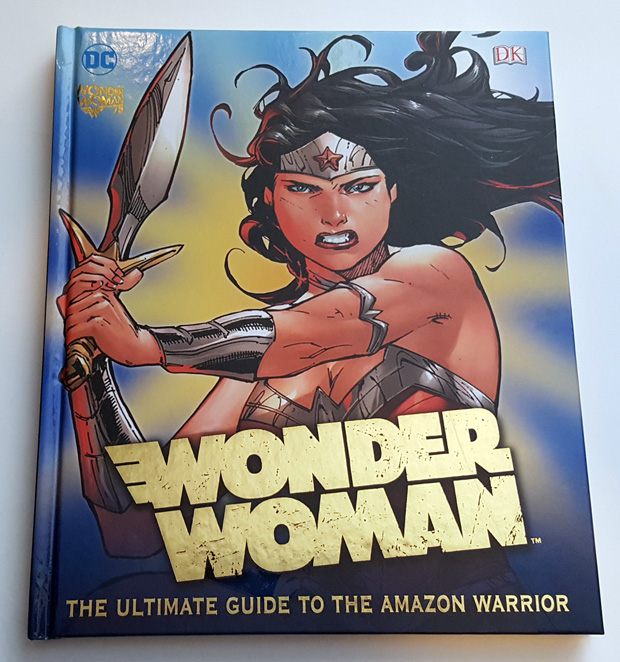