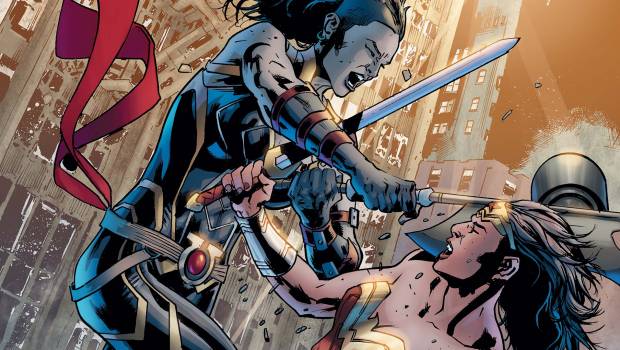 The issue opens up with Wonder Woman’s twin brother Jason returning after he was engulfed in blue flame and vanished. However with Jason returning, he is wearing strange armor and how he obtained this is all a haze to him as he mentions a dream of giants. This reunion is however interrupted when one of Steve Trevor’s agents informs him that they have found Grail in Bavaria.

So while Jason uses his newly honed powers to fly both he and Diana to Bavaria, he discloses the first time that he met Grail was when he encountered the Deep Six. Jason also apologies again to Diana and vows his own revenge against Grail. However when they arrive in Bavaria, Grail is about to slay the Huntsman as she is stopped by Wonder Woman as Jason battles a hoard of Parademons.

While Wonder Woman bests Grail, she imprisons her with her magic lasso and asks her the question… what is Darkseid planning? We discover that Darkseid is planning to build an army and by retrieving all the relics and aligning it with this ancient temple, he will be able to build a boom tube to steal the energies of the Greek Pantheon and other energies linked to them.

However before Grail can answer any more questions, she does manage to escape thanks to her training and return to Darkseid who plans on attacking A.R.G.U.S. in order to retrieve more artifacts for his nefarious plan. All in all, another enjoyable issue from writer James Robinson with some Glorious Godfrey art by Jesus Merino who creates a perfect Wonder Woman with some stellar panels and a truly horrifying Darkseid.