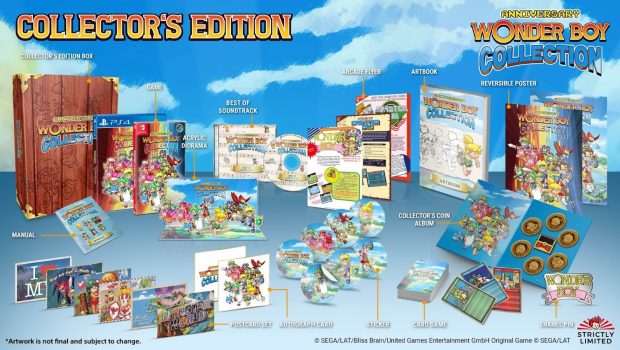 Publisher Strictly Limited Games is looking forward to the pre-order start for the Wonder Boy Anniversary Collection on March 6th. In the course of this announcement, they also revealed the extensive list of games that will be included in this very special collection of one of the most influential series from gaming’s past.

The legendary Wonder Boy game series has turned 35 and to celebrate this occasion, Strictly Limited Games puts together a legendary collection of epic Wonder Boy adventures that will soon be available for pre-order as Limited and Collector’s Editions for Nintendo Switch and PS4.

This extensive collection of Wonder Boy titles as a boxed version will only be available at Strictly Limited Games! This is a worldwide exclusive boxed release – there will not be any other physical release of equal completeness. Strictly Limited Games’ Japanese partner Bliss Brain will provide a digital version of this amazing collection – more on this will be announced at a later date.

The perfect blend of platforming and RPG action you can find throughout the Wonder Boy series has delighted generations of gamers and now, the Anniversary Collection combines the beloved adventures to a full package of Wonder Boy history. Also included are features like filter, shader, a rewind option, a save anytime option and more!

Also available is a highly limited Collector’s Edition with exclusive collectible items, including:

The Ultra Collector’s Edition will be available for €149.99, limited to 999 copies for Nintendo Switch and 499 copies for PS4.

As a carefully curated selection of awesome Wonder Boy titles, ININ Games together with Bliss Brain will offer the Wonder Boy Collection (Nintendo Switch/PS4), including four legendary adventures as a boxed and digital version:

A possible upgrade solution for the Retail Edition with additional games of the Wonder Boy series is currently in evaluation. More info will be announced at a later date!

The Wonder Boy Collection will soon be available for pre-order at retailers in Europe and North America. The download edition including the same four iconic Wonder Boy adventures will hit the digital stores at the time of release! Check https://www.iningames.com/games/wonder-boy-collection/ for more information about the standard version and the latest updates on the game!