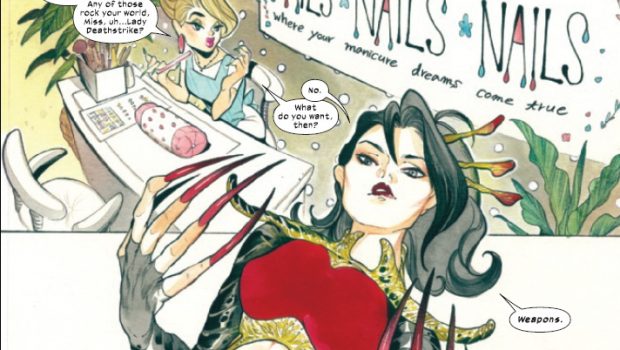 Summary: A showcase of not only women characters in the Marvel universe but also the women writers and artists who create them. Well worth your time and a great jumping off point to find out more of their work.

Featuring various characters from the Marvel universe such as She Hulk, Jean Grey, Queen Hela, Daughters of Liberty, Medusa, Mystique, Lady Deathstrike, Captain America Peggy Carter amongst others this book is a showcase of not only women characters but also the women writers and artists who work for the company.

Although originally comic books were mainly read by a certain male demographic, with the popularity of the Marvel movies and comic books in general almost half the readers these days are women and they have wanted to see more of themselves in the stories. At the start having women-centred stories were regarded as not as popular but now there are dozens of series that have a woman main character and have a lot of fans.

I did like some of the shorter stories in this such as Lady Deathstrike getting her nails done, Emma Frost using her mind powers on laundry day and Queen Hela having her death hound sleep on her bed it was cute.

As usual after reading a new story from an artist or writer I have not heard of before I will go check out their social media and there are a lot of great artists and writers featured here who you can look up and go check out their other work.

I would recommend this one if you want to see some lesser-known Marvel characters in their own stories and find out a lot of great artists and writers you would not normally have heard of unless you know the characters they have been involved with already.