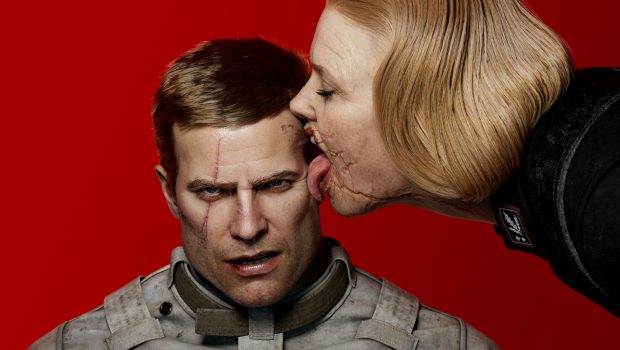 As a heavily story-focused first-person shooter released among a wave of multiplayer games-as-a-service titles and loot box bonanzas, it’s been weird to realise Wolfenstein II’s brand of single-player fun sticks out like a sore thumb in the modern gaming landscape. But the continued focus from developer MachineGames on providing well-written single-player stories and over-the-top ultra-violent gunplay and nothing else – multiplayer be damned – makes me appreciate their brilliant follow-up to 2014’s The New Order all the more.

For those completely new to the series, Wolfenstein: The New Colossus is not a standalone game; knowledge of the previous entry is necessary to understand many story beats, returning characters and past references. Set in 1961 in an alternate timeline where the Third Reich won World War II with advanced weaponry and high-tech Nazi soldiers, the story begins immediately after the closing events of The New Order, just as protagonist B.J. Blazkowicz is rescued in the nick of time by the Kreisau Circle resistance group. Unfortunately, our hero falls into a five-month coma and re-awakens with his legs broken and mind emotionally drained, yet that doesn’t stop him from murdering waves of invading Nazis in a wheel-chair in a bad-ass opening mission.

It’s not long before B.J. reunites with his team and confronts the recurring grim reality of his lifetime: Despite hard-earned victories against General Deathshead, North America and the rest of the world is still thoroughly dominated by the Nazi regime. In addition, Frau Engel, B.J.’s mangled adversary from The New Order, has swiftly taken up Deathshead’s mantle as the new figurehead for the Nazi regieme and is hunting down the resistance to the ends of the earth. However, Frau’s unrelenting cruelty and the Third Reich’s utter domination of everything good is compelling motivation, if there ever was anything greater, for B.J. (and the player) to continue the bloody crusade to rid the Nazi scum infesting the country just itching for another American Revolution.

MachineGames’ dystopian alt-sci-fi world is still as ultra-gritty and ultra violent as we left it in The New Order. Nazis dominate North America and the world with brute force, which is about as easy as it gets when it comes to providing players the ultimate first-person shooter power fantasy, with zero guilt attached in revelling in it. An early execution scene involving General Engel and some of B.J.’s allies is reminiscent of a (now infamous) scene in The New Order and quickly reminds players the Nazi’s aren’t playing around or owed any mercy. Rest assured – there is an abundance of blood-curdling scenes of cruelty and murder to watch and engage in, along with unrestrained exploration of many uncomfortable themes such as misogyny and racism. In the end, these elements, along with Engel’s constant (and brilliant) unpredictable menace, help contextualise the never-ending hyper-violent rampage through waves of Nazi grunts B.J. takes comfort in without second thought.

Wolfenstein II takes a more intimate look into B.J. as a character this time around. Multiple times throughout the game, the player gets to spend some time delving into his memories from his childhood, providing further insight into what made him into the reflective man and unapologetic Nazi killer we play as during the game. Several Nazis have taken to calling B.J. ‘Terror Billy’ for his uncanny kill count and B.J.’s in-game prowess at mowing, crushing, stabbing and vaporising his enemies is second to none. However, the sequel’s smarter writing in explaining B.J.’s fiery determination to fight back against oppression and fascism, despite his numerous wounds and losses, made it easier to become a lot more invested in his overall goals. Still, if you aren’t a fan of gory, vulgar FPS games, its improvements in the narrative department won’t sway you any different, though its numerous twists and turns throughout its 15-hour campaign may.

The Wolfeinstein IP is one MachineGames inherited and re-shaped to great effect and the studio has well and truly moulded it into their own unique universe in their sophomore effort. There are some seriously bat-shit crazy scenarios and dialogue exchanges in Wolfenstein II that made me laugh out loud several times, yet never took me out of the seriousness of the war-weary story. The sick, twisted jokes made at the expense of Hitler and the Third Reich and everything they stand in this alternate history just meshes incredibly well, even as a fan of the more straight-laced war entries made by Raven and Gray Matter Studios. While the black comedy and sometimes absurd tone won’t appeal to everyone, it certainly helps The New Colossus stand out among the crowded (and often indistinguishable) shooter market.

Wolfenstein II moves the world-spanning plot forward through a linear series of  levels, ranging from the depths of a captured Nazi U-boat to Third Reich parades in New Mexico complete with KKK members celebrating alongside their occupiers, to the bombed out remains of New York City and the ghettos of New Orleans. Several of these zones are non-combat environments, where you can take your time exploring and immersing yourself in the depressing world of Nazi-occupied America. There’s plenty of fascinating conversations to be had with NPCs (with excellent voice-acting all around), including your fellow Kreisau Circle members while you have some down-time in Eva’s Hammer, and the amount of detail put into every environment is astounding given this is a shooter first-and-foremost.

I always feel like run ‘n gun is an overused term in video game reviews, but it is entirely accurate to use in the case of Wolfenstein II. Like its predecessor, gameplay and gunplay is literally off-the-walls, pulse-pounding fun as you massacre your way through waves of Nazi soldiers, commanders and high-tech mechanised monsters with fast and responsive first-person shooter controls. You can play it straight-forward and mow down your enemies from room-to-room loudly and proudly, or dispose of them stealthily through the clever use of the environment, which always has at least one or two alternate approaches to facilitate smarter firefights that are a little more high-and-seek than straight up bloodbath. Because health only regenerates up to a certain amount, players also have to pick up health packs and armour before, during and after every combat encounter to survive the onslaught of Reich soldiers that outnumber B.J. every single time.

Whatever your gameplay preference, B.J. is a glass cannon in Wolfenstein II; he can dish out maximum pain but he can also fall victim to a swift death should the player not be reactive or smart enough. Enemies hit just as hard and just as fast, and the presence of commanders, who call out constant reinforcements until they are killed, can quickly make firefights go south. Thankfully, there is a variety of different weapons and gadgets at B.J.’s disposal to counter most threats. Most are traditional World War II-inspired firearms with a high-tech twist (shotguns, SMGs, rifles) to laser beams and the good old hatchet – and killing waves of Nazis has never felt more visceral or satisfying thanks to the indulgent animations and their responsive reactions triggered whenever B.J. shoots, stabs, vaporises or burns them to bits. I can never quite get over the grisly hilarity of smashing a Nazi officer on the side of B.J.’s wheelchair until his face is broken apart. 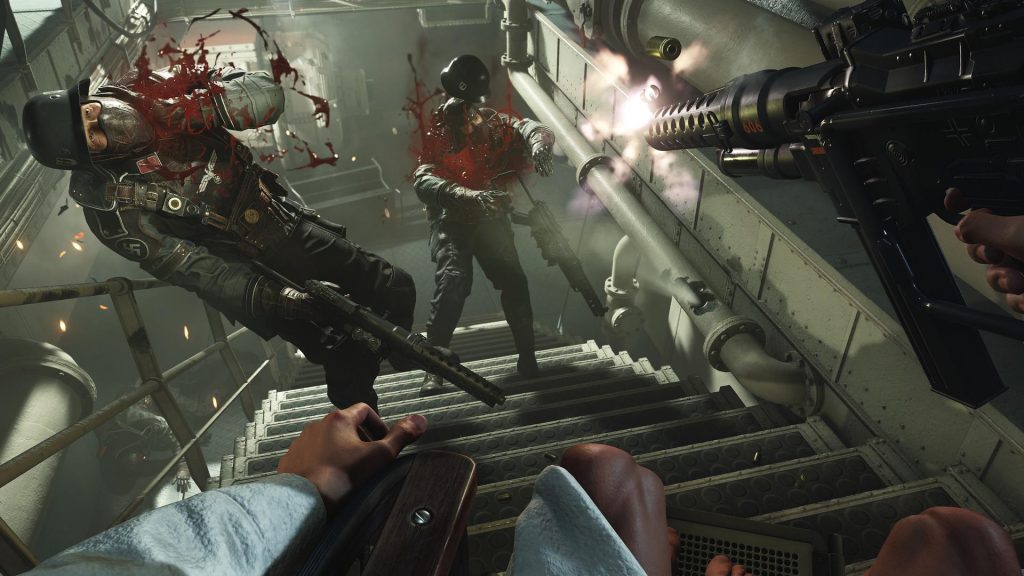 With seven difficulty modes, you can tone down or increase the severity of every fight accordingly, but playing on ‘I am Death Incarnate!’ (the second highest) I found the game’s A.I. to be a little bit too all-knowing of B.J.’s presence; stealth was too often thrown out the window because they magically detected me despite facing the other way. It was often very frustrating to experience, given I didn’t always want to dual-wield and go in guns blazing, and I don’t recall having similar issues in The New Order. The stealth mechanics aren’t exactly as fleshed out and it’s clear the game encourages the more over-the-top approach to dispatching Nazis, but it would have been great to see the team implement improvements for players who like to play ghost every now and then.

The weapon upgrade system from The New Order is carried over in Wolfenstein II, with three potential boosts to your favourite gear in various forms, including additional ammo capacity, increased damage output, scopes, suppressors and more – achieved by scrounging rare upgrade kits throughout each level. Perks also return, encouraging players to mix up their playstyle with rewards for achieving certain combat feats such as headshots or for scoring kills while your health is temporarily boosted and so on. There is also a massive abundance of collectables in every level which may or may not tickle your fancy, but I was personally a fan of reading all of the notes, newspaper clippings and diary entries given the writers put clear effort into fleshing out the world beyond what’s told to us in the already very impressive main story cutscenes and idle NPC chatter.

In terms of presentation, Wolfenstein II is a huge improvement. Back in 2014, games like The New Order had to accommodate both the aging PlayStation 3 and Xbox 360 and then-new generation PlayStation 4 and Xbox One consoles, and it suffered as a result. But Wolfenstein II has no such burden, and the developers have clearly pushed the id Tech 6 engine to its limits to achieve its movie-quality cinematics and general aesthetic. Reviewing the game on PlayStation 4 Pro, the game looked and ran beautifully at 1440p upscaled at 60fps – and I hear it looks and runs even better at 4K on PC and the just-released Xbox One X. The frame-rate generally remained smooth throughout play, with minor hiccups experienced at certain sections of the game with more enemies on-screen.

Wolfenstein II: The New Colossus is a continuation of everything that made Wolfenstein: The New Order so beloved. It’s a hyper-violent, smartly-written first-person shooter which puts high-quality single-player gameplay and interesting characters and settings first and foremost, and the end result shows. Even though the power fantasy of shooting your way through thousands of Nazis is the main draw-card, the consistently strong narrative makes each death, development, victory and loss feel properly significant rather than purely for the shock factor. Combined with immersive exploration and engaging world-building of its dystopian alternative history timeline, it’s not one to miss if you’re craving a full-fat single-player FPS campaign like we used to get on the regular – there’s not a crappy microtransaction or loot box in sight here.